The US men's basketball team lost its first game at the Olympics since 2004. Japan’s Yuto Horigome claimed the first ever Olympic skateboarding gold, while Germany won it's first Olympic medal. Follow the latest on DW. The US, normally packed with NBA stars, have won gold in men's basketball at the last three Olympics, having not lost a game since their disappointing showing at the 2004 Athens Games. But this iteration, which boasts the likes of Kevin Durant, Damian Lillard and NBA champion Jrue Holiday, let an eight-point halftime lead slip to France.

Durant, an 11-time NBA All-Star, was held to just 10 points by a French defense that featured NBA veterans Rudy Gobert and Evan Fournier.

The US defeat comes off the back of losses to Nigeria and Australia in the buildup to the Olympic Games. The Americans now need to beat the Czech Republic and Iran to reach the quarterfinals of them men's tournament.

Here's a roundup of the latest news from the Tokyo Olympics:

Germany also picked up a bronze in archery, finishing third in the women's team event. Michelle Kroppen, Charline Schwarz and Lisa Unruh had lost to the Russian team in the semifinals, but beat Belarus in the bronze medal match. South Korea won their ninth straight gold in the event. 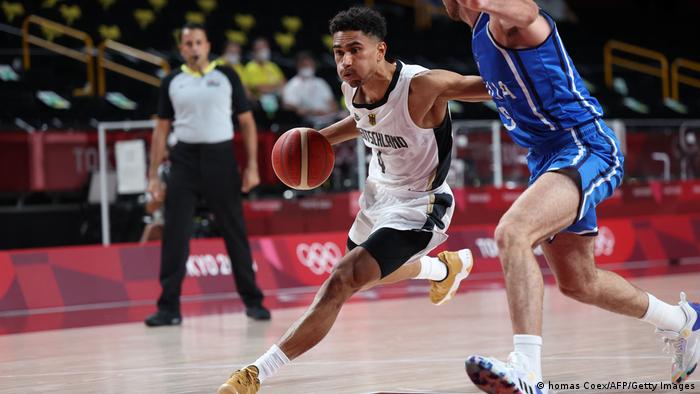 Germany’s men’s basketball team fell to Italy 92-82 despite having led for long stretches. It was the side’s first appearance at an Olympics in 13 years. Henrik Rödl’s men failed to score in the final four minutes, as NBA stars Nicolo Melli and Danilo Gallinari stepped up in the closing stages.

In women’s field hockey, Germany delivered a much more impressive showing. They beat defending champions Great Britain 2-1 in their first match, despite losing defender Viktoria Huse, who scored the decisive goal, for five minutes due to a yellow card in the closing stages. Captain Nike Lorenz had already made headlines before the match, after successfully campaigning to wear a rainbow flag on her sock. 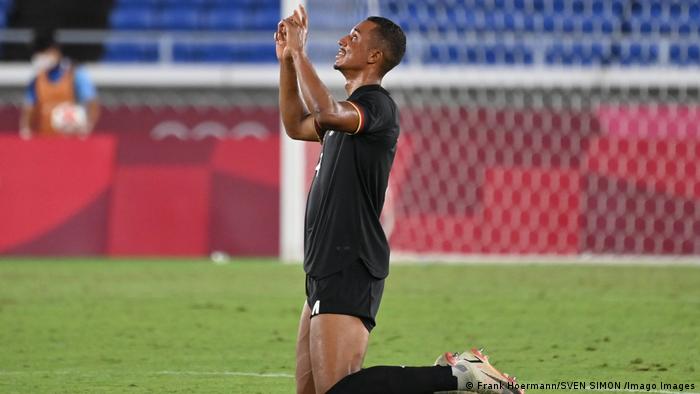 The men's football team was also triumphant, winning their second pool game against Saudi Arabia 3-2. Germany took the lead twice through Nadiem Amiri and Ragnar Ache, but Sami Khalil Al-Najei equalized twice to keep Saudi Arabia in it. Despite going down to 10-men after Amos Pieper's red card, Germany ended up the victors thanks to a 75th-minute winner from Felix Uduokhai.

In badminton, the mixed doubles pair of Mark Lamsfuss and Isabel Herttrich won their second match of pool play, defeating Mongolia's Chan Peng Soon and Goh Liu Ying two sets to none. A victory on Monday against Tang Chun Man and Tse Ying Suet of Hong Kong would see the German pair reach the quarterfinals. Hettrich spoke to DW News after the win:

Japan's Yuto Horigome won the first-ever Olympic skateboarding event, beating out stiff competition to claim gold in the men's street category. Horigome said the victory "meant so much more to me" because the event took place in the Tokyo ward where he grew up. American Nyjah Huston, a firm favorite in the event, placed seventh in the eight-man field, falling repeatedly trying to land tough tricks. 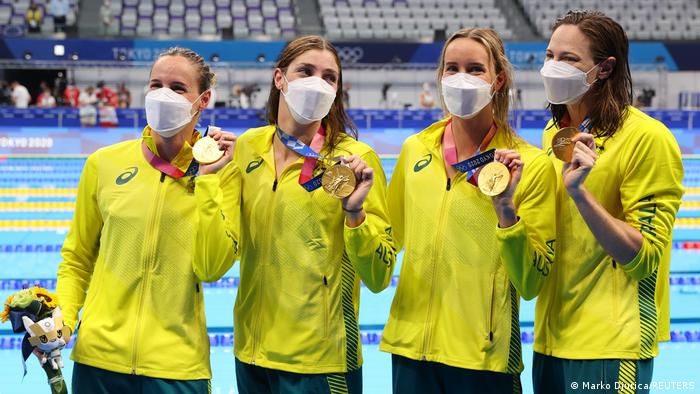 Australia set the first swimming world record in the Tokyo Olympics when they won gold in the women's 4x100-meter freestyle relay. The Aussie team finished with a time of 3 minutes, 29.69 seconds, breaking a previous Australian mark set in 2018. Sisters Bronte and Cate Campbell swam the lead and anchor legs, with Meg Harris and Emma McKeon swmming the middle legs.

A more unlikely success story came from Ahmed Hafnaoui of Tunisia. The 18-year-old grabbed a gold medal in the men’s 400-meter freestyle, shouting himself hoarse as he celebrated his win. Germany’s Henning Mühlleitner missed out on a bronze medal by .13 seconds in the same race.

A pair of siblings from host Japan took gold in two different Judo disciplines within an hour of each other. Uta Abe struck gold first, winning the women's under-52kg category, defeating Amandine Buchard of France. She then cheered on her brother, Hifumi Abe, as he beat Georgia's Vazha Margvelashvili in the under-66kg gold medal fight.

Austrian Anna Kiesenhofer stunned favorites Netherlands to win the women's cycling road race. Kiesenhofer broke away early and hung on to her lead ahead of Dutch cyclist Annemiek van Vleuten.

Kimia Alizadeh, an Iranian refugee living in Germany, just missed out on becoming the first athlete of the Refugee Olympic Team to win a medal. A bronze medalist at the 2016 Olympics in Rio, she lost the under-59kg Bronze Medal Match to Turkey's Kubra Ilgun.

In women's tennis, Naomi Osaka is now the highest-ranked player remaining in the singles draw. World number one Ashleigh Barty lost her first-round match to Sara Sorribes Tormo, who defeated the Wimbledon champion in straight sets 6-4, 6-3. Barty made headlines in Tokyo off the court last week after it was announced she would be staying in a hotel outside the Olympic Village. The Australian will remain in Japan to compete in the women’s doubles.

On the men's side, two-time defending Olympic champion Andy Murray is out of the running in the singles bracket, having withdrawn shortly before his match against Felix Auger-Aliassime on Sunday with a thigh strain. It ends hopes of a hat-trick of golds for the Briton, who still aims to compete in the doubles with partner Joe Salisbury.

Meanwhile, high temperatures saw the International Tennis Federation (ITF) activate its extreme weather police, which allows players extra time between sets once readings go above 30.1 degress Celsius (86.2 Fahrenheit). Men’s world number one Novak Djokovic and Daniil Medvedev had previously both complained about the heat during their first-round matches on Saturday. Tokyo's high summer temperatures had long been a concern leading up to the Games.

American Bryson DeChambeau was forced to drop out of the men's golf tournament after returning a positive COVID-19 test. He was joined by Spain's world number one Jon Rahm shortly after. Both players competed in the Open at Royal St George's in Kent last week. The two cases continue a worrying trend of in-competition athletes testing positive for the disease, though it is estimated that 80-90% of the athletes and staff in the Olympic Village are fully vaccinated.