Together against Putin - for the moment

Chancellor Merkel's visit to Washington came at a tense time. The NSA spy scandal remains a sore point, and despite the common message to Putin, there are still differences regarding new sanctions against Russia. 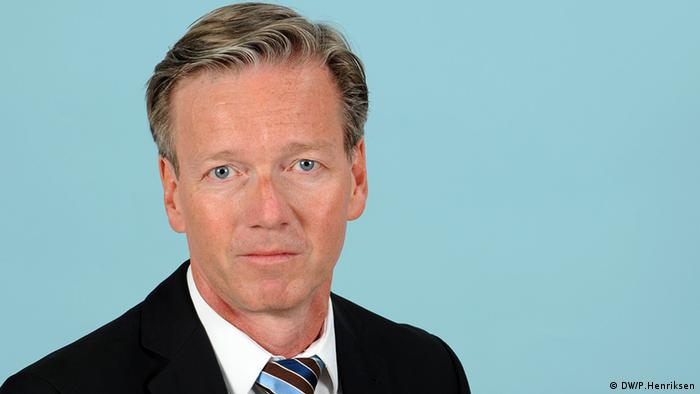 Angela Merkel's visit to Barack Obama was a crisis meeting, something both politicians have rarely experienced. The policy toward Russia has been a dramatic failure so far. Putin is questioning the post-war order and the struggle for Ukraine is growing more threatening by the day. At the same time, the NSA spy scandal continues to simmer, causing deep fissures in the transatlantic foundation. Without question: the German chancellor and the US president face the biggest challenge in bilaterla relations since the fall of the Berlin Wall.

Surprisingly, the NSA scandal has played a greater role during the visit than the US hosts wanted. During the press conference in the Rose Garden of the White House at prime time President Obama agreed in front of cameras to a cyber-dialogue.

It was a political consolation that Angela Merkel really needed to return home with so as not to lose face because the long-desired no-spy agreement is not going to happen. It seems that the significant differences concerning the issue of privacy and big data will continue.

This poses great dangers because even after the meeting of Merkel and Obama it is not clear whether German-US relations can withstand future tests. In particular, it is not clear if the Ukraine crisis is cementing the two countries together, or if it is dividing them even further.

A signal of unity to Putin

At least Merkel and Obama have sent a signal of unity to Moscow, making it clear that the presidential elections in Ukraine on May 25 are a decisive touchstone. If Putin continues to destabilize Ukraine, making it impossible to hold the election, Europe and the US will impose new sanctions.

But precisely here lies the reason for further transatlantic conflict. At their joint press conference, Merkel and Obama agreed that sanctions were not an end in themselves, but that was just a compromise formula.

Here, the loss in mutual trust from the NSA spy scandal has taken its toll. Ahead of Merkel's visit to Washington, people close to Obama as well as the Republican opposition expressed their mistrust and impatience toward the allegedly sanction-reluctant Germans. Even serious American political experts suspect that Merkel is practicing appeasement towards Putin. Going a step further, Republican Senator and former presidential candidate, John McCain, voiced biting criticism, accusing Merkel of weak leadership and of being beholden to industry, calling her lack of action on Ukraine “embarrassing” and “a disgrace”.

The Americans obviously believe sanctions will have an effect and they want to force Putin to give in by implementing even tougher sanctions. But, the US has little to lose because its trade with Russia is negligible.

Merkel rightly opposes the pressure for tougher sanctions, certainly because the German economy would suffer considerable disadvantages because of them, but mainly because he wants to reverse the priorities. She primarily does not want to enforce a higher “cost” on Russia for its breach of international law. And in any case a “punishment of Putin” is not her highest priority, as is often demanded in the US media.

Strategy instead of sanctions

The players in the West have to keep a cool head in the midst of the escalating conflict with Russia. Sanctions cannot replace politics. And the first political priority should be that they agree on a common Ukraine strategy and how to deal with Russia in the future. Obama has said next to nothing on this topic – but the same foes for Merkel. At least, the president admitted at the press conference that Russia had legitimate interests in its geopolitical neighborhood.

Germany is the first point of contact when the US formulates a new global foreign and security policy. That also applies to negotiations for a new transatlantic free trade zone, which, despite a Merkel speech to the US Chamber of Commerce, attracted little attention.

The German chancellor is the undisputed leader in Europe for Obama and he has even encouraged her to exercise those leadership qualities. The message is clear: Much depends on Merkel - perhaps even more than she would like in these times of crisis.

German Chancellor Angela Merkel has met with US President Barack Obama. The two leaders are seeking to repair ties after the NSA scandal and forge a common front in the Ukraine crisis. (02.05.2014)

Chancellor Merkel is visiting Washington in dramatic times. But the Ukraine crisis is a chance to improve transatlantic ties after discord over the NSA scandal, says Wolfgang Ischinger in an interview with DW. (02.05.2014)

Ukraine escalation could lead to a mess nobody wanted

With Russia uninterested in a negotiated deal and the West unable to sway events on the ground, the situation in eastern Ukraine could inadvertently spiral out of control, an Oxford University Russia expert tells DW. (02.05.2014)