'Tide of the century' swells around French landmark

Crowds of people have gathered at France's Mont Saint-Michel to see an unusually high spring tide caused by the current sun-moon configuration. Other locations experienced a similar phenomenon. 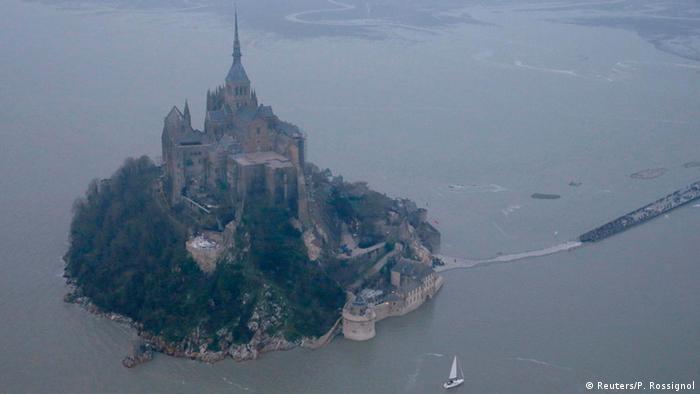 The sun and the moon joined forces on Saturday morning to produce a remarkable natural spectacle at the Mont Saint-Michel abbey in northern France, with a tidal surge of around 14 meters (46 feet) that cut the rocky island off from the mainland.

Thousands gathered to see the tide, which reached a first high point during the night and is to reoccur on Saturday evening. The island will be lit by spotlights for the occasion.

The Naval Hydrographic and Oceanographic Service (SHOM), situated in Brest, said the expected tidal coefficient - an indicator of the difference in height between consecutive high and low tides - is 119, the highest-ever reported level. The coefficient ranges between 20 and 120. 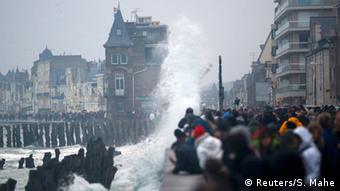 Mont Saint-Michel already has some of the strongest tides in the world, but the current positions of the sun and moon relative to the earth are producing an effect that is seen about once every 18 years or so - giving the lie to the media billing as "tide of the century."

The "supertide" phenomenon will also be seen at other places around the world, with the Bay of Fundy on the Atlantic coast of Canada expected to experience a surge of up to 16 meters. The Bristol Channel in western England is likely to see a more than 14-meter difference between low and high tide levels.

The tidal phenomenon is linked to Friday's solar eclipse and to the current "supermoon," which occurs when the moon comes closer to the earth than normal.

Germany has more installed solar power capacity than any other nation. That led to worries that Friday morning's solar eclipse might destabilize the power network. Network operators prepared carefully for the event. (20.03.2015)

Europe's solar eclipse: as it happened

An eclipse is darkening parts of Europe on Friday in a rare solar event that won't be repeated for more than a decade. The eclipse - when the moon passes between the earth and the sun - follows a 5,800-kilometer path. (20.03.2015)