Left Party politician Bodo Ramelow has been chosen as premier by the parliament in the eastern German state of Thuringia. The state now has the first socialist-led government in Germany since reunification in 1990. 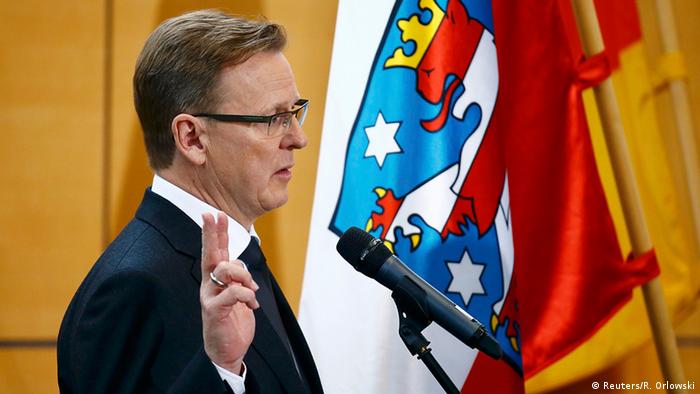 The state parliament of the eastern German state of Thuringia on Friday elected Bodo Ramelow to head a left-leaning coalition consisting of his Left Party, the Social Democrats (SPD) and the Greens.

A former trade unionist from western Germany, Ramelow has become the first member of his party to become premier of a state.

Ramelow's election was expected, although the coalition won only the slim majority of one parliamentary seat at polls in September. He won the post in a second round having failed to garner the necessary votes in the first.

Chancellor Angela Merkel's Christian Democrats (CDU) won the most seats at the September elections, but were unable to forge a coalition to give them the absolute majority needed to govern. The CDU has headed every government in the state since German reunification in 1990.

The coalition that will now take power in the state has caused some misgivings in certain quarters, with critics claiming that the Left Party has not distanced itself sufficiently from the communist regime in the former East Germany, which included Thuringia.

The Left Party has its roots in the Socialist Unity Party (SED) that ruled former East Germany under a virtual one-party system. Among other things, the SED was responsible for the building of the Berlin Wall, which divided German for 28 years.

Some observers also fear that the very slight majority possessed by the coalition will cripple its legislative punch.

The so-called "red-red-green" coalition has announced plans to improve education in the state, in particular by hiring more teachers, and to give one year of free kindergarten education to every child.

Germany's Left party still struggles to shrug off its past

The Left party reorganized itself, changed its name and asked the public for forgiveness. But as the successor to East Germany's communist party, it can't seem to shake its past. (05.12.2014)

Three left-leaning parties have signed a coalition agreement in the German state of Thuringia, giving Germany its first socialist-led state government in 25 years. But a slim majority could pose problems. (04.12.2014)