Thousands of adoring fans are in Orlando for what they say will be a historic event. Though his reelection campaign began the day he took office, the rally marks its official beginning in a must-win state. 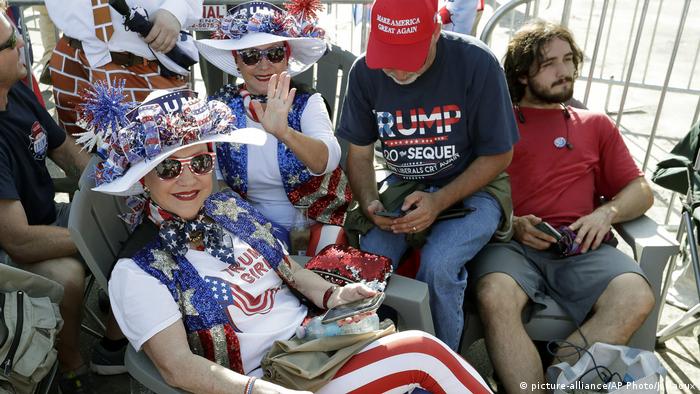 Fans of US President Donald Trump camped out since Monday in hopes of getting a good seat as he officially launched his 2020 "Keep America Great" reelection campaign with Vice President Mike Pence in Orlando, Florida , on Tuesday evening.

In fact, Trump filed his campaign with the Federal Election Commission (FEC) on January 20, 2017 — the day he took the oath of office — and began campaigning shortly thereafter. Tuesday, however, is being billed as the official start of his 2020 reelection bid.

The site of the announcement is key, as Florida is a must-win state. It is also a swing state, and votes in the past have often been too close to call — as was famously the case in the year 2000, when the inability to find a winner in Florida led to the Supreme Court handing the presidency to George W. Bush.

Trump has spent more than 100 days in Florida since he became president, holding rallies and fundraisers, and visiting his properties in the "Sunshine State," requiring public money to beef up security, most notably at Mar-A-Lago.

On the ground in Orlando

DW's Alexandra von Nahmen was on the ground in Orlando and talked to a number of the president's supporters. All spoke about the issues that were important to them.

"We support President Trump because he has fulfilled everything he promised to do. He is a man of his word. And that's a wonderful thing to see," Gustavo Ortega told DW.

Ortega says the president has delivered on the economy and jobs. But he adds: "What we love about him is that he is not a politician. That's basically what sets him apart from everybody else."

Trump's claims about what he has done for the economy remain controversial, not only because he inherited a strong economy from his predecessor Barack Obama, but also because his policies, such as increased tariffs, have mostly hurt the very Americans he promised to champion, the farmers and factory workers. Tariffs have also seen foreign and domestic companies alike nix plans to expand and provide more jobs in the US.

Read more: Opinion: Trump hasn't been all bad for the EU

Those assertions are reminiscent of Richard Nixon's famous claims that a "great silent majority" of Americans supported him despite broad and vocal opposition to his policies in the late 1960s.

That sentiment was echoed by Orlando resident and Trump supporter Eduard Whelan Portilla:"Trump voters don't identify themselves in polls and they don't put out yard signs. They are afraid of Democrats breaking them and throwing stones at their houses. So there is a tremendous amount of secret support for Trump."

Asked about the chances of Trump being reelected, Portilla said, "It is going to happen again, because the news media and the Democrats are a bunch of fools."

Trump fans are fervent in their support, even in the face of the president's contradictory statements and actions. One rallygoer, Blake Marnell from San Diego, embodies that devotion. Sporting a "Make America Great Again" cap and a brick-patterned suit, Marnell arrived in Orlando at midnight and slept just two hours to get a front-row seat.

Speaking of his suit, Marnell says: "I support barriers at America's southern border to keep illegal narcotics and human trafficking out. As a whole, America needs to take care of itself before it worries about taking care of some of the other things we have been involved with over the last 20 years in terms of wars in the Middle East and things like that. We definitely have to deal with some issues here in America first."

He, too, is confident that Trump will be reelected. "I believe that the American people, when they examine the issues, will actually decide to vote for him because he has been the most effective president we've ever had," he said.

However, sheriffs at the US-Mexico border, including Republicans, have consistently maintained that a border-length wall is neither helpful in curbing illegal immigration nor a realistic project.

Can Trump carry Michigan again in the 2020 election?

Laureen Vartanian and her sister Maureen Bailey drove an hour from their hometown of Port Orange to arrive in Orlando at 6:30 a.m. on Monday in hopes of scoring a front-row seat. "We wanted to see our president up close," says Vartanian. "We went to other rallies. But this is a historical event. It is an honor and we love him and what he has done for our country."

Bailey echoed a claim that Trump has often made, saying, "He has done more for his country than any president in the last 50 years."

No worries for Trump in Tennessee heartland

The congressional committee investigating the mob attack on the US Capitol has said in its latest hearing that the former president refused to take action to stop his supporters, despite pleas from aides.

The party censured two lawmakers for joining the investigation and former Vice President Mike Pence said Donald Trump was "wrong" to think he could overturn the election.