Three suns for one planet

Astronomers have discovered a unique solar system. It's not just one of those where planets are orbiting a star - three stars and one gas giant are orbiting each other in a highly complex way. 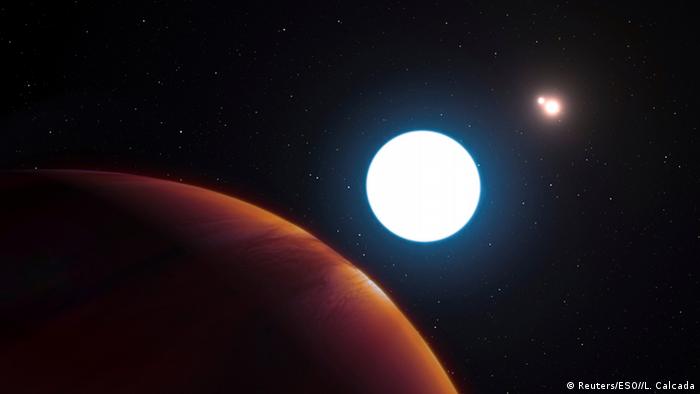 The view from the gasplanet: In the center is the large sun. In the background the twin solar System.

An international team of researchers at the European Southern Observatory (ESO) in Chile has discovered a highly complex solar system which involves a total of three stars. In the center, there is a giant sun called 131399A. It has a mass 1.8 times that of our sun.

A twin-system of two smaller suns is orbiting the large sun at a distance 300 times larger than the distance between our Earth and sun.

The twin-solar-system itself consists of a larger star called HD131399B and the smaller HD131399C, which is orbiting the larger one. The distance between the two is roughly that of our sun and Saturn, or 9.5 times the distance between sun and Earth.

A huge planet is orbiting the largest of the three suns. It is a gas giant called HD 131399Ab. It has roughly four times the mass of Jupiter - the largest planet in our solar system. The discovery was published in an online edition of the journal Science. 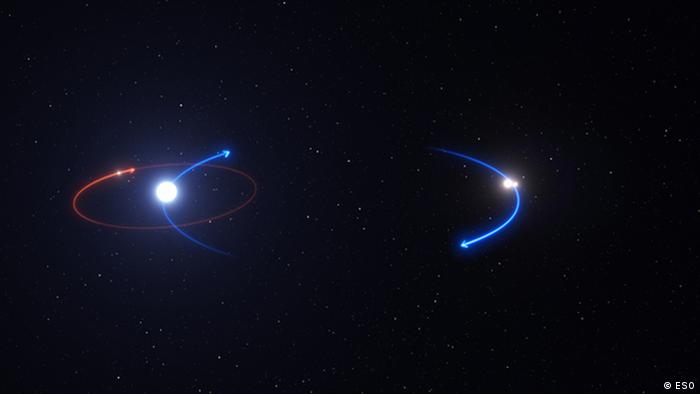 The whole solar System in view: The planet is orbiting the large sun. The twin system is farther away.

It’ll be “the world’s biggest eye on the sky.” The European Southern Observatory has awarded a 400-million-euro contract to build the European Extremely Large Telescope - the largest ever in ground-based astronomy. (26.05.2016)

Scientists have made a promising discovery: three potentially inhabitable planets. But don't pack your bags just yet - it is far too early to say whether we could really live there. (03.05.2016)

Kai Polsterer, a theoretical physisist, wants to help astronomers deal with the masses of digital observation data coming from today's high-tech telescopes as well as archived data of past astronomical measurements. (20.01.2014)

Known as the E-ELT for short, the European Extremely Large Telescope will be located at the European Southern Observatory, the ESO. (02.09.2013)

The system is located roughly 340 light years from us. The gas planet is relatively young. With his juvenile age of only 16 million years he belongs to the youngest planets ever discovered in the universe. To orbit his sun once, he needs 550 years.

The unusual constellation of three suns and one planet leads to all kinds of interesting conditions. In some seasons - which are all longer than a human life - at least one of the suns will be shining at all times. There are three sunrises and sunsets every day.

Even though the gas giant is relatively large - compared to many other planets in the universe - and also has a less than cozy climate with temperatures of 1,070 degrees Fahrenheit (550 Celsius), the astronomers consider it rather small and cold for his class.

There are two reasons. First: It is an exoplanet - a planet outside of our solar system. Second: It was found using "direct imaging" by SPHERE - the Spectro-Polarimetric High-Contrast Exoplanet Research Instrument, which is part of ESO's Very Large Telescope (VLT) in Chile.

That puts it into the rare class of "directly imaged exoplanets." Most of the smaller and colder exoplanets remain invisible for telescopes on earth. Their existence can only be proven in indirect ways.

The majority of exoplanets are found when they transit in front of their respective stars. They dim the intensity of light and radiation emitted from their - that's how they are identified. The second most important method of finding exoplanets is called doppler spectrography, also known as the radial-velocity method. Astronomers use it to calculate the mass and orbit of a planet by detecting irregularities in the movement of stars, applying the law of gravity. 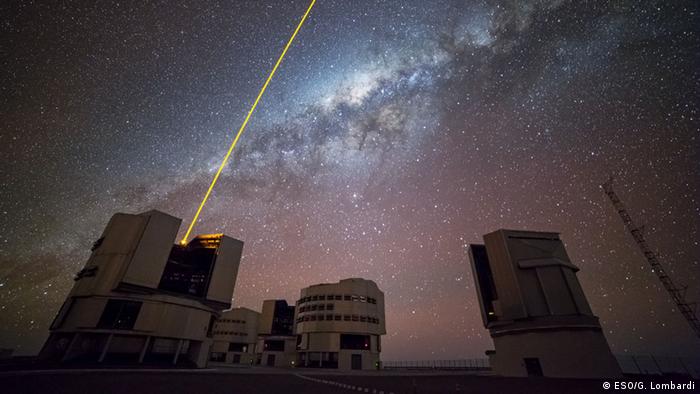 The Very Large Telescope in Chile is specialized in finding exoplanets.

The few exoplanets one can see from Earth must therefore be extremely bright and large. Otherwise it would not be possible to identify them using a telescope.

"HD 131399Ab is one of the few exoplanets that have been directly imaged, and it's the first one in such an interesting dynamical configuration," assistant professor Daniel Apai from the University of Arizona explains in a statement.

How stable is the solar system?

At this point the astronomers are not certain yet how stable the solar-system with three suns will prove to be in the long run.

"Our computer simulations showed that this type of orbit can be stable, but if you change things around just a little bit, it can become unstable very quickly," Apai said.

"It is not clear how this planet ended up on its wide orbit in this extreme system," Kevin Wagner, a PhD student in his working group adds. "We can't say yet what this means for our broader understanding of the types of planetary systems out there, but it shows there is more variety out there than many would have deemed possible."

A Surprising Planet with Three Suns