Three astronauts blast off from Kazakhstan for four months on ISS

Three astronauts have taken off from Russia's Baikonur Cosmodrome heading for the International Space Station (ISS) in an upgraded Soyuz spacecraft. The three are US, Japanese and Russian citizens. 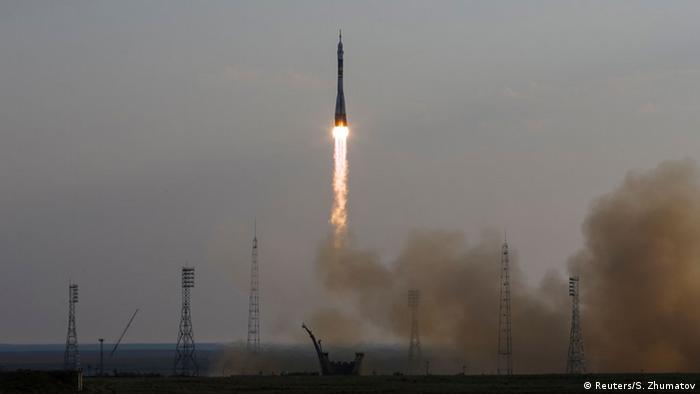 Three astronauts blasted off early Thursday from Russia's Baikonur Cosmodrome towards the International Space Station (ISS) in a Soyuz spacecraft with upgraded boosters, an improved navigation system, strengthened shielding from debris and more cells on the craft's solar panels.

"And lift-off!" said a commentator on NASA TV, which broadcast footage of the launch in Kazakhstan at 0136 UTC.

US astronaut Kathleen Rubins of NASA, Takuya Onishi of the Japanese space agency and Russian cosmonaut Anatoly Ivanishin are to spend four months at the ISS. They will join NASA astronaut and station commander Jeff Williams and two Russian cosmonauts who have been aboard the orbital outpost since March.

Ivanishin has been into space before but it is the first time for Rubins and Onishi.

Rubins is the first woman aboard the ISS since Italian Samantha Cristoforetti spent 199 days in space last year.

The NASA astronaut is a molecular biologist who joined the space program in 2009. She will become the first person to sequence DNA in space during her mission.

Trained pilot Onishi is the eleventh Japanese national to go into space. He will take part in experiments linked to the Tanabata star festival celebrated in Japan.

The crew is due to arrive at the ISS on Friday.

NASA hopes to resume flying astronauts from the United States in 2018 on board capsules being developed by Boeing Co and privately owned Space Exploration Technologies, or SpaceX.

ISS astronauts return to Earth after 186 days in space

Astronauts Tim Peake, Timothy Kopra and Yuri Malenchenko have touched down in Kazakhstan after spending six months in orbit on the International Space Station. The trio conducted dozens of experiments during the mission. (18.06.2016)

Russia's president has admonished space program executives and government officials for the late launch of a rocket. However, he congratulated cosmodrome workers for a successful second attempt. (28.04.2016)