Mass demonstrations have been staged in Baghdad and Basra calling for the withdrawal of Turkish troops from near the northern city of Mosul. Some protesters threatened violence against the soldiers. 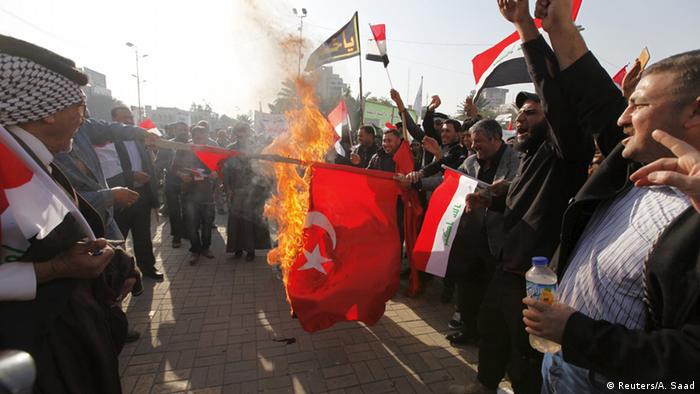 Thousands of Iraqis, many of them members of Shiite militias, gathered in Tahrir Square in the capital, Baghdad, on Saturday to call on Ankara to withdraw its troops and tanks from the country. Several thousands more protested in the southern oil city of Basra.

Some protesters trampled on or burned Turkish flags while denouncing Turkish "occupation," while others held up banners calling for violence against Turkey and its president, Recep Tayyip Erdogan.

The rallies were called by the umbrella group of Shiite militias, which are almost equal in power to the Iraqi army.

The protests come as Iraq and Turkey are embroiled in a diplomatic uproar following the deployment of an additional 150 Turkish soldiers to a base near Mosul earlier this month, reinforcing its previous military presence.

Baghdad says Ankara deployed the troops without its permission and has appealed to the United Nations Security Council to call for their immediate withdrawal. Ankara, for its part, insists that the troops are part of an international mission to train and equip Iraqi forces to fight the jihadi extremist group "Islamic State" ("IS"), which still holds large swathes of territory in Iraq.

Iraq's top Shiite cleric, Grand Ayatollah Ali al-Sistani, has also joined the fray, saying that the Turkish deployment was done "under the pretext" of helping fight "IS," while Iraqi Prime Minister Haider al-Abadi on Friday reiterated his warning that Iraq would protect its sovereignty by "any means."

The Russian Foreign Ministry said on Saturday that Foreign Minister Sergei Lavrov had spoken with his Iraqi counterpart Ibrahim al-Jaafari to discuss what it called the "unlawful incursion" by Turkey.

Turkey has since halted new deployments, but has so far refused to pull out troops already stationed in Iraq.