Thousands protest against PEGIDA march in Stuttgart | Germany | News and in-depth reporting from Berlin and beyond | DW | 17.05.2015

Several thousand people in Stuttgart have gathered to protest against the right-wing group PEGIDA's planned rally. PEGIDA is a movement of people opposed to a perceived "Islamization" of western countries. 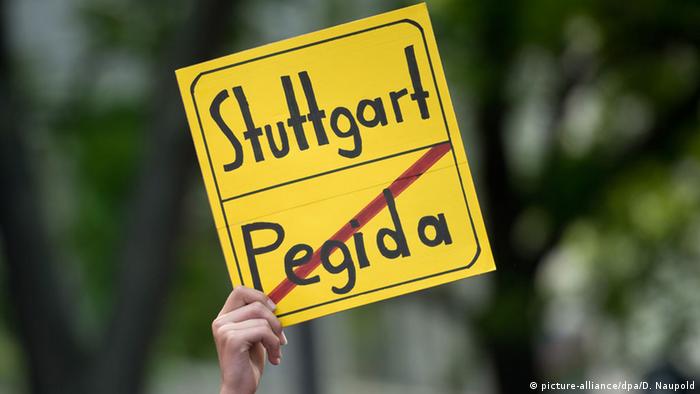 Some 4,000 people took to the streets of Stuttgart on Sunday to block the right-wing PEGIDA's planned demonstration in the city. Several hundred police officers were on hand to handle possible violence between the right-wing organization and its opponents.

The comparatively few PEGIDA participants, estimated to number between 200 and 300, could barely make their voices heard among the thousands who thronged to oppose the group's march. Despite heavy security, there were reports of heated arguments and skirmishes, as well as of eggs and apples being thrown at the police, who also discovered a smoke bomb in the area.

Officers had to escort several members of the right-wing group so they could safely reach their protest venue. Stuttgart's police also tweeted to citizens, asking them to demonstrate peacefully and let PEGIDA activists pass through.

There were reports of other extreme right groups such as the "Berserker Pforzheim" showing solidarity with PEGIDA, which stands for Patriotic Europeans against the Islamization of the West. 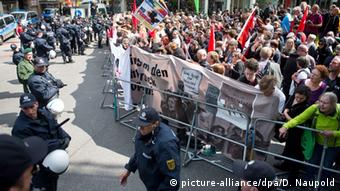 The anti-PEGIDA rally in Stuttgart was called by the group "For diversity, against racism," a conglomerate of many civil society groups, including the Stuttgart church. Several such groups have emerged since PEGIDA began its demonstrations in December last year, blaming the increasing influx of immigrants into Germany and Europe for terror attacks and endangering Western culture.

Meanwhile, the United Nations Committee on the Elimination of Racial Discrimination last week expressed its concern "at the proliferation and dissemination of racist ideas by certain political parties and movements" in Germany.

It lauded Berlin's attempts to comply with the UN anti-racism convention, but said the country lacked efficient measures to punish racist speech crimes. It also called for a clearer definition of racist discrimination, which would make filing a complaint easier in such cases.