Thousands protest against austerity in Slovenia | Business| Economy and finance news from a German perspective | DW | 18.11.2012

Thousands protest against austerity in Slovenia

Thousands of Slovenians have joined together to protest government austerity measures. The demonstrations are one in a series of Europe-wide objections to strict government spending cuts. 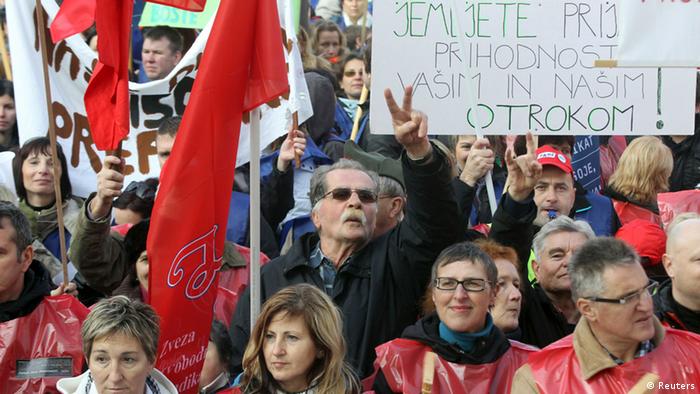 Over 30,000 people gathered in the Slovenian capital of Ljubljana on Saturday in a protest backed by trade unions, as well as student and pensioner organizations.

Slovenia has been badly hit by the eurozone economic crisis due to its dependency on exports. In an effort to avoid bailout, the government cut public sector wages by 3 percent earlier this year.

A further 5 percent cut is expected next year to help bring the budget deficit to 3 percent of GDP, down from the 4.2 percent expected in 2012.

The government is also planning on raising the retirement age in January, easing the hiring and firing of employees and slashing unemployment benefits.

The cutbacks are expected to contract the economy by 2 percent this year, and a further 1.4 percent next year.

The Alliance of Slovenian Independent Unions (ZSSS) and the public sector unions were the demonstration's main supporters.

Thousands arrived by bus from all over the country. Protesters wore blue and red plastic vests bearing the names of their unions and carried banners with anti-government slogans.

"We demand that the government rejects that neo-liberal virus that is spreading across Europe … the reforms have to be in line with the needs of citizens and not in line with expectations of the people in Brussels," Dusan Semolic, head of the ZSSS, said to the crowd.

Students and pensioners also protested joined the protests, unhappy with spending cuts for schools and pensions, and the increase of student taxes.

"I'm protesting because the government is reducing funds for universities and students," said politics student Nastja Vidmar. "I believe that everyone should have free access to knowledge and that universities should be autonomous."

Slovenia's labor minister Andrej Vizjak said he understood the hostility, but that the austerity measures were necessary.

"Those who protest against austerity measures do not have any realistic and possible alternative scenarios," he said.

Slovenia joined the EU in 2004 and adopted the euro currency three years later. Large numbers of bad bank loans have spurred fears the country may need outside help from the 17-member eurozone.