Former German President Joachim Gauck was among hundreds of politicians and dignitaries who attended the funeral for the slain mayor of Gdansk. In the wake of the killing, the Polish PiS party has seen its support fall. 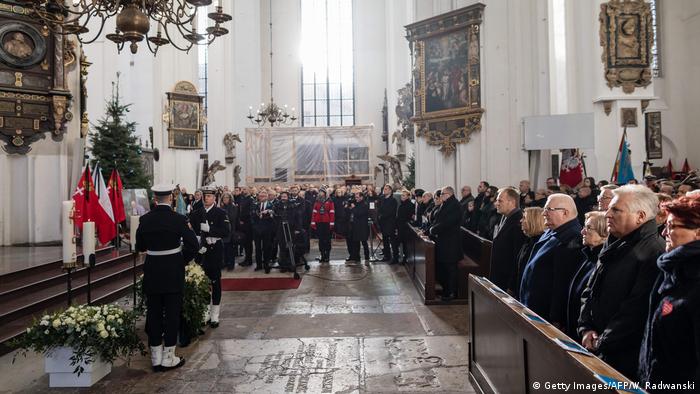 European officials joined thousands of people from across Poland Saturday for the funeral of Pawel Adamowicz, the slain mayor of the northern city of Gdansk.

The church was packed and priests wearing purple vestments conducted the service. Outside, the streets were jammed with citizens who watched the events inside on large screens. 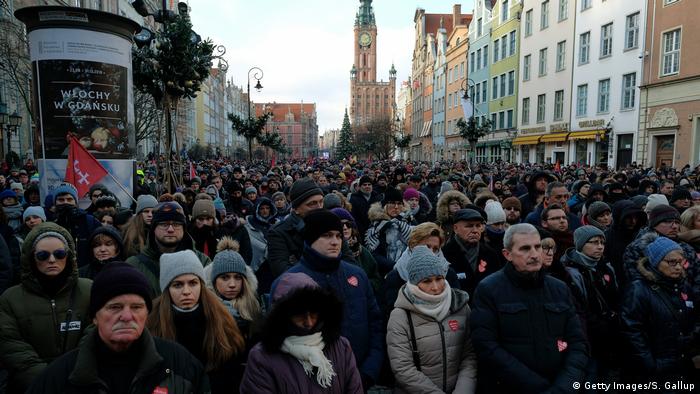 The Gdansk streets were packed with mourners

Adamowicz, 53, died Monday after being stabbed the night before at a charity event. The suspect who was arrested is an ex-convict with a grudge against an opposition party to which Adamowicz once belonged.

Former German President Joachim Gauck was among the many dignitaries and city mayors from other countries.

The powerful leader of Poland's ruling conservative party, Jaroslaw Kaczynski, did not attend.

A solemn procession brought Adamowicz's casket to the basilica for a Mass on Friday night. A car drove carrying his corpse drove slowly through the Baltic coast city starting at the museum of the Solidarity movement that helped to bring down communism in Poland 30 years ago. The body was then cremated. The black urn with the mayor's ashes will be laid to rest at one of the basilica's chapels.

"We all feel great emptiness after the mayor has gone, mostly because he left in such a way, such a town, such a moment. I think that a certain stage of history, of  humanity, is over," said mourner Ewa Wasinska-Stelter, 46, a teacher.

The streets were blocked, as crowds paid tribute to one of Poland's longest-serving mayors who ran the city since 1998 and beat the candidate of the ruling Law and Justice (PiS) party in October. 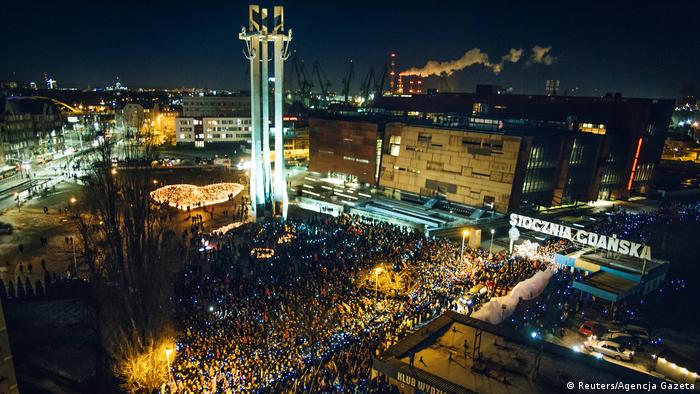 The procession on Friday night

The killing of the mayor, which came as Poland faces a deep political divide over actions by the conservative ruling Law and Justice party, was a shock to the nation. It has drawn calls for greater national unity and condemnation of hate speech in the public sphere.

Adamowicz was one of 11 Polish mayors targeted with fake death certificates by a far-right group called All-Polish Youth in 2017, after signing a declaration to welcome refugees in opposition to government policy.

Support for the conservative PiS party has fallen to 30 percent in the wake of Adamowicz's death, according to a poll conducted by Kantar Millward Brown for Gazeta Wyborcza daily newspaper.

The Polish city of Gdansk is saying farewell to its mayor, who was stabbed to death at a charity concert. The suspected attacker's mother has told police she was concerned that her son was planning political revenge. (19.01.2019)

Demonstrations took place across Poland as President Andrzej Duda signed into law a measure that enables the right-wing ruling PiS Party handpick the next chief justice. (27.07.2018)

Several thousand people mourned the death of Gdansk Mayor Pawel Adamowicz after he was stabbed at a charity event. Marches took place across the country, including Poznan, Krakow and the capital Warsaw. (15.01.2019)

Turkey and Greece hit by severe earthquake 4h ago