Thousands of Students Addicted to Video Games, Study Says | Germany| News and in-depth reporting from Berlin and beyond | DW | 16.03.2009

Searching for a motive behind the school shooting in Winnenden, experts are again pointing the finger at violent video games. Now, a study has concluded that thousands of German high school students are gaming addicts. 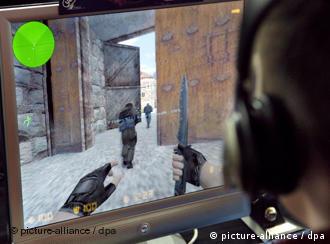 Killer games such as 'Counterstrike' already have a bad name

Some 14,000 ninth graders in Germany are considered to be addicted to computer games, according to a new study carried out by the Criminological Research Institute (CRI) of Lower Saxony. The results of the study are being presented on Monday, March 16, in Hanover.

A further 23,000 students in this age group are considered to be in danger of becoming gaming addicts, the study said. Researchers interviewed 44,610 ninth-graders nationwide on their gaming habits.

They found that ninth graders devote an average of 130 minutes to computer video games on school days, and an average of 167 minutes a day on weekends.

The rates of addiction are strongly correlated to gender. Researchers concluded that nationally, some 3 percent of 15-year-old boys are gaming addicts, while only 0.3 percent of ninth-grade girls were said to have an addiction.

The study also found that teens increasingly spend time playing games in front of their computers. On average, young people now spend 40 more minutes gaming each day than they did in 2005.

The head of the CRI, Christian Pfeiffer, singled out one online role-playing game, "World of Warcraft" as being particularly addictive and suggested upping the age at which people are permitted to play from 12 to 18 years. 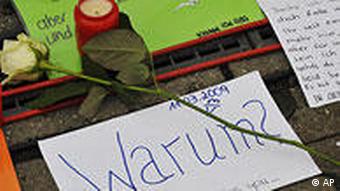 Pfeiffer told news magazine Der Spiegel that it was unacceptable that the rate of addiction was not a criteria examined when a game is assigned an age limit.

There's been a renewed focus on the detrimental effects of excessive video gaming in the wake of last week's school shooting in the town of Winnenden in southwestern Germany.

Investigators have since said that the 17-year-old gunman, Tim K., played "Far Cry 2," a shooter video game in which players hunt arms traffickers in the jungle, the night before he went on a rampage at his former school, killing 15 people before shooting himself.

Germans mourned the deaths of this week's school shooting victims as the first burial took place Saturday. Authorities are still investigating the rampage that resulted in the death of 16 people, including the gunman. (14.03.2009)

Police say a the alleged chatroom warning from the teenager who killed 15 people in a shooting rampage could be fake, while four hoaxers have been arrested across Europe for threatening posts on the Internet. (13.03.2009)

German politicians of all parties said the country needed to avoid making knee-jerk reactions to the school shooting that shocked Germany. But others called for measures to protect children to be put in place. (12.03.2009)