Thousands of protestors fill streets in Minsk over election results | Europe | News and current affairs from around the continent | DW | 20.12.2010

Thousands of protestors fill streets in Minsk over election results

Thousands of opposition supporters took to the streets to protest the reelection of Belarusian President Alexander Lukashenko on Sunday. Many tried to storm the main government building but were repelled by police. 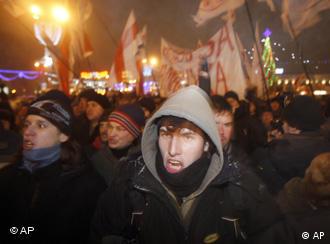 According to official results from the Belarusian electoral commission released early Monday morning, President Alexander Lukashenko won reelection with 79.67 percent of the vote, giving him an outright first-round victory.

Following exit polls that suggested Lukashenko had been reelected, at least 10,000 opposition supporters took to the streets of the capital, Minsk.

Thousands tried to storm the main government building to protest what the opposition claims was large-scale vote rigging. Protestors broke windows and glass doors, but backed off after discovering riot police inside the building.

Anti-riot police intercepted 200 demonstrators, letting off noise grenades and beating people back with truncheons. Hundreds of protestors were arrested, among them at least three of the election's nine opposition candidates.

A spokesperson for another presidential challenger, Vladimir Neklyayev, said the candidate suffered a serious concussion in initial clashes with police and had been hospitalized.

Lukashenko, who has been in power in the former Soviet republic since 1994, earlier warned the opposition against holding protests and banned public gatherings on election day. 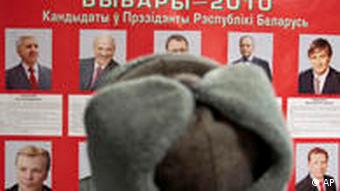 In Minsk's central Independence Square, thousands of opposition supporters had gathered to hear speeches from five of the candidates, who widely condemned the election.

"This was a farce and not an election," opposition candidate Yaroslav Romanchuk told the protestors. "The authorities had the chance to extend us a hand but again they did not."

The opposition denounced the controversial practice of early voting, which saw 23 percent of people cast their votes before election day.

Police estimate the number of those rallying in and around the square was around 5,000. However, media outlets varied in their estimates, with some saying the figure was at least 40,000.

Voters in Belarus head to the polls to elect their president on Sunday. Known as "Europe's last dictator," President Alexander Lukashenko is expected to claim a fourth term, despite facing nine opposition candidates. (19.12.2010)

In a month's time, voters in Belarus go to the polls to elect a president. While live debates among candidates will be broadcast for the first time, analysts doubt whether the elections will truly be free and fair. (19.11.2010)