Tens of thousands of pro-government "Red Shirts" have rallied on the outskirts of Bangkok. The demonstration is aimed at showing support for Prime Minister Yingluck Shinawatra after months of anti-government protests. 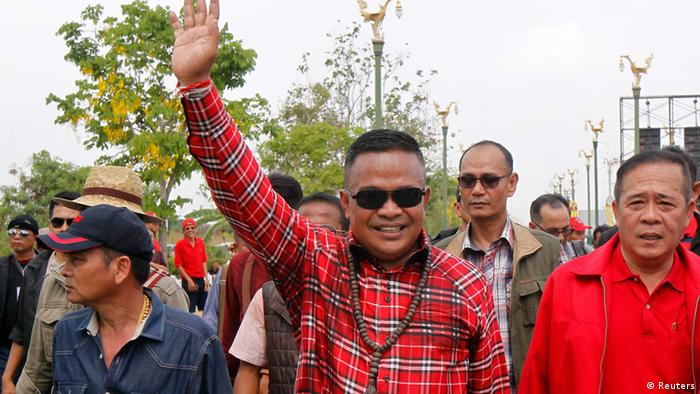 Gathering on Saturday, followers of the United Front for Democracy against Dictatorship (UDD), better known as the "Red Shirts," kicked off a three-day rally held around a dozen kilometers (miles) outside of downtown Bangkok.

UDD organizers said around 300,000 people had signed up to join the rally, while more than 3,000 police and troops have been mobilized for the event. The last time Red Shirts gathered in large numbers, five people were killed after shooting broke out nearby.

Thailand has been rocked by more than five months of anti-government protests that have left 24 people dead and hundreds more wounded. The unrest escalated after Yingluck's ruling party attempted to push a bill through parliament that would have granted amnesty to her brother, former prime minister Thaksin Shinawatra.

Protesters claim Yingluck is a mere puppet of Thaksin, who was ousted as premier in a bloodless military coup in 2006 amid allegations of corruption and abuse of power.

Saturday's Red Shirts demonstration was intended as a warning against those who want to topple Yingluck's government.

"Today we have come close to Bangkok," said UDD co-leader Kaugeow Phiaunphong. "We are ready to move into Bangkok if anything unconstitutional happens."

Speaking to a crowd of tens of thousands, Red Shirt leader Jatuporn Promphan (pictured above) accused anti-government protesters and the nation's judiciary of trying "to take over power without elections... We will fight if this country becomes undemocratic."

"The Thai people have reached the point of no hope, because we are now aware of the repeated deceptions," he told reporters afterwards. "What we are most concerned about, that we want to warn all sides against, is a civil war, which we do not want to happen... It will happen if there is a coup and democracy is stolen."

The anti-government protests that have been ongoing since November are seeking to not only topple Yingluck's government, but curb the influence of her brother, who fled the country in 2008 to avoid corruption charges.

Yingluck sought to ease the current crisis by calling February elections. Although the vote was held, the Constitutional Court annulled the results last month due to disruptions of registration and voting, and no date has been set for a new poll.

Last week, the Constitutional Court agreed to proceed with an abuse of power case against Yingluck, in which she has been accused of misconduct for transferring the Security Council chief to another position in 2011 in a conflict of interest. She has been ordered to present her case within 15 days. Yingluck would have to step down if found guilty of interfering in state affairs for her personal benefit.