The Italian coastguard says more than 4,000 migrants crossing from Africa to Europe were rescued in the Mediterranean on Friday. But 17 corpses were also found. 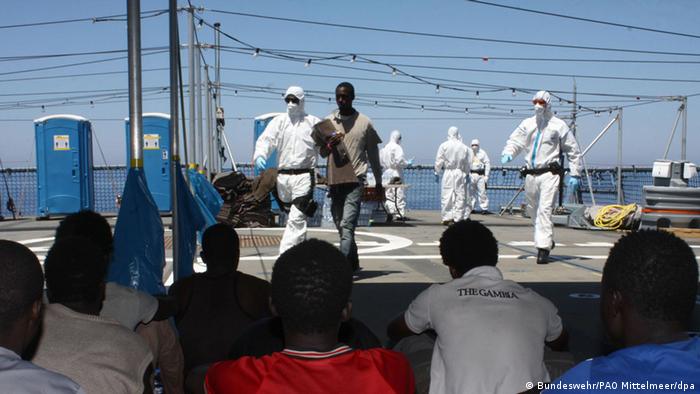 As many as 4,200 migrants were saved in 17 rescue operations in the Meditteranean Sea on Friday, the Italian coastguard said, as boats continue to leave Africa in droves carrying thousands of people seeking a better life in Europe.

The coastguard, which is coordinating rescue operations, said 22 different boats sent distress calls. Many were received off Libya, where most of the boats depart from, but a number also came from off the southern Italian coast.

It said German and Irish ships also helped in the rescues, alongside vessels of the Italian navy and financial police.

The number of people rescued in the space of 24 hours is one of the highest in recent years.

The navy said on Twitter that the bodies of 17 people who died during the perilous voyage were also found on three inflatable dinghies, from which more than 300 other migrants were rescued alive.

It did not say how the people died.

Some 1,770 migrants have lost their lives so far this year making the perilous crossing, according to a report by the International Organization for Migration (IOM) - 30 times more than in the same period last year - while more than 40,400 have reached Italian soil.

The number of migrants arriving in Europe, though massive, is on a par with the same months last year.

The last few weeks have seen a spike in the number of people attempting to reach Europe by boat as weather conditions improve. The worsening security situation in Libya is also thought to have contributed to the increase.

Many of the migrants are fleeing conflict and poverty in countries such as Syria and Eritrea.

Italy, along with Malta and Greece, is at present bearing the brunt of the migrant influx, but the European Commission has unveiled plans for the 28-nation European Union to share the burden more evenly - plans that this week met with resistance from a number of countries, notably Britain.

EU ministers this month also approved plans for a military operation to combat human traffickers in the Med in the wake of a major disaster in April in which hundreds of migrants are thought to have died.

Migrants in Libya have been exposed to of abuse that force many to make the perilous journey across the Mediterranean, Amnesty International claims. Libya, once a stepping stone to Europe, has become a dangerous trap. (11.05.2015)