Thousands of Italian women protest against Berlusconi | Europe| News and current affairs from around the continent | DW | 13.02.2011

Thousands of Italian women have turned out across the country to protest against Prime Minister Silvio Berlusconi. They say his alleged affairs with young women humiliate females as a whole. 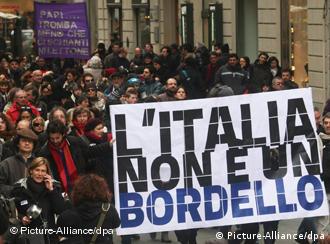 The banner reads, 'Italy is not a brothel'

Italian women have turned out in their thousands to protest against the lewd behavior Premier Silvio Berlusconi.

The Italian leader, who openly acknowledges his fondness for pretty young women, is being investigated for allegedly paying for sex with a 17-year-old nightclub dancer.

Women chanting "enough!" and waving placards with signs saying "Italy is not a brothel" demanded Berlusconi's resignation. Women's groups said the premier has hurt their dignity, and object to the indecent representation of women in newspapers, advertising and on television.

'I'm a woman and I say enough'

One of the first protests began early Sunday in Palermo, Sicily, with at least 5,000 participants according to local media. Other demonstrations were planned in 230 Italian cities as well as abroad. The largest rally was in Rome, which started with a minute's silence. 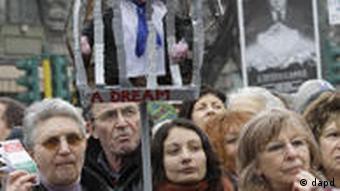 Berlusconi has a track record of dalliances with women

"We're here to say that Italian women are not all like Berlusconi's prostitutes," Maria Rosa Veritta, a protester in Milan, told the AFP news agency. "It's a horrible image that we're giving. We've become a joke in the rest of the world."

Prosecutors allege Berlusconi later used his influence to help spring her from police custody when she was being held on theft charges.

Both Berlusconi and the now 18-year-old dancer deny they had sex with each other.

"You can't consider yourself above the law and feel that you have absolute impunity," Fini said. "We have become the laughing stock of the Western world."

Berlusconi says sex probe against him is 'disgusting'

Silvio Berlusconi has been hanging on to power by a string, hit with a number of scandals and political setbacks. But he gained a symbolic vote of support from parliament that signified he will not be leaving soon. (04.02.2011)

Charges that Italy's scandal-prone prime minister had sex with an underage nightclub dancer have occupied Italian headlines for days. Now the Catholic Church's highest leaders are calling on him to return to morality. (21.01.2011)