Thousands march in support of gay marriage in France

Thousands of pro-gay rights demonstrators have gathered in Paris to show support for gay marriage and adoption legislation. The rally comes two days before a parliamentary debate on the heated issue. 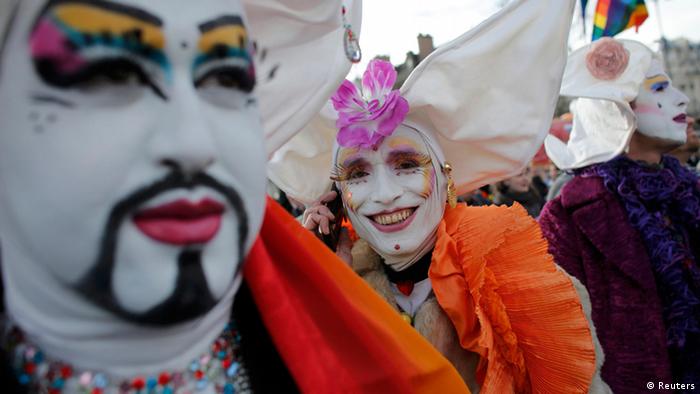 The demonstrators rallied with rainbow flags and banners reading "For equality now, against discrimination always," Sunday as they marched from Denfert-Rochereau square in the south of the French capital.

The French government is proposing a bill to legalize gay marriage and adoption. Parliament is set to debate the measure, which stems from a promise President Francois Hollande made last year in his election manifesto, on Tuesday.

Same-sex couples in France currently have the right to register their relationships as civil unions, which grants them fewer legal right as a couple than married citizens.

The proposed bill met with strong objection from the country's mainstream center-right opposition, the Catholic Church and France's 5-million-strong Muslim community, among others.

"It is very important today that you announce the words that you are for an equality law, and you are part of the French society that has widespread support for this view," said Desir.

Prime Minister Jean-Marc Ayrault has expressed his support for the rally, saying on Saturday there was "no doubt" about the outcome of the equality bill.

"A law will be passed and with a large majority too," Ayrault said.

The issue of "marriage for all" is proving contentious in France, with large demonstrations against the idea backed by the Catholic Church and the right-wing opposition party. Those in favor say they aren't rattled. (15.01.2013)

Thousands of people also took to the streets Saturday in other cities around France, including Toulouse, Lyon, Montpellier and Bordeaux, in support of the bill.

Hollande has dismissed calls to put the issue to a referendum and plans to attend one of France's first gay marriage ceremonies once the law is enacted later this year.

Organizers had hoped for six-figure attendance numbers. Police estimated 125,000 people turned out, while organizers put the figure at 400,000. Two weeks ago, some 340,000 people descended on Paris for a protest opposing the proposed changes.

Despite the large numbers of people rallying against the bill, opinion polls have consistently shown that most voters support gay marriage.

A recent Ifop survey found that 63 percent of respondents were in favor of gay and lesbian couples having the right to wed. The French public, though, remains divided on whether those couples should have the right to adopt, with 49 percent in favor and 51 percent against.

If the bill passes, France would become the 12th country in the world to legalize same-sex marriage.