Thousands of people have demonstrated in favor of refugees in the German city of Dresden. Organizers aim to make the Saxony capital, which is also the home of anti-Islamization group PEGIDA, appear more welcoming. 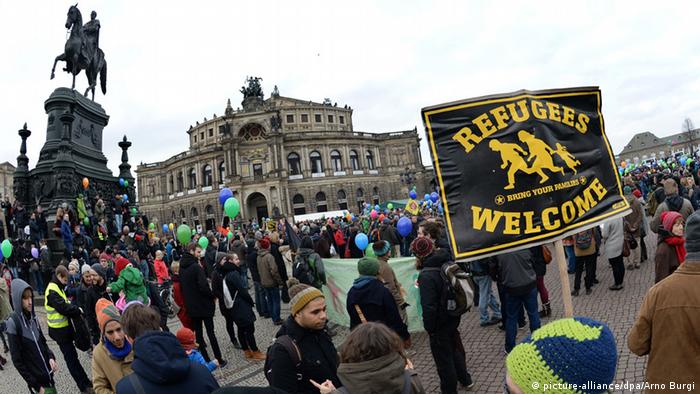 Police estimates put the number of demonstrators in the "Solidarity with Refugees" demonstration at 3,500, although organizers put the figure as high as 5,000.

Officials said that the demonstration had been peaceful and passed without incident. After a meeting in the city's Theaterplatz square, participants marched a route that took in both sides of the River Elbe.

"Say it loud - say it clear, refugees are welcome here," was a key slogan for the event, organized with the support of church organizations, trade unions and political parties.

"PEGIDA is the most significant counter-Enlightenment movement in recent German history," resurrecting a "social dynamic that is dangerous," were among the messages from the podium.

Demonstrators called for an easing of restrictions keeping families apart and improved accommodation, with refugees being housed in apartments rather than reception centers.

The eastern German city was chosen for having been the birthplace for the PEGIDA "anti-Islamization" group, which attracted 25,000 people to one of its weekly demonstrations in January. Organizers claimed the pro-refugee demo was aimed at repairing an image tarnished by those rallies.

Social inclusion group RAA claims that the atmosphere generated by the PEGIDA rallies has led to an increase in attacks on asylum seekers, as had been anticipated late last year.

PEGIDA was launched in October with an appeal on social media to protest plans to add 14 centers for about 2,000 refugees in the Dresden area. Members of the group deny accusations they are far-right extremists or neo-Nazis.

Hundreds have attended a rally in northeastern England under the banner of German-based "anti-Islamization" group PEGIDA. The protest was dwarfed by a counterdemonstration, with police keeping both sides apart. (28.02.2015)