German citizens gathered by the thousands in several demonstrations against the anti-Islam movement "Pegida." Politicians said they were proud of the large numbers of people supporting immigrants. 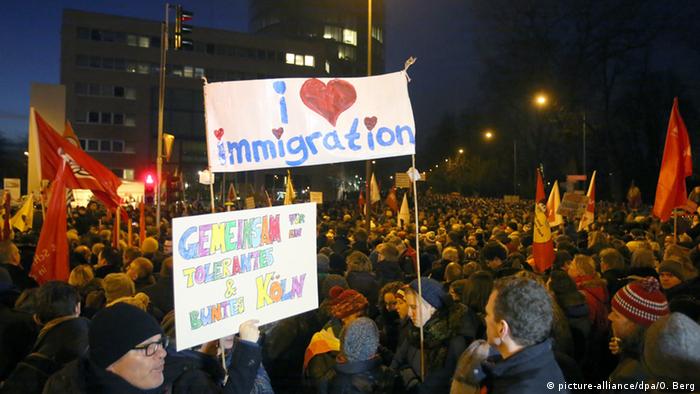 Citizens thronged to streets in German cities to protest the anti-Islam movement "PEGIDA," members of which gather nearly every Monday to rally against a perceived Islamization of Western countries.

The Mayor of Stuttgart in Germany's southern state of Baden Württemberg, Fritz Kuhn, expressed "pride and joy" at the large numbers of anti-PEGIDA demonstrators, saying it was a clear statement against the marginalization of immigrants and for integrating refugees into German culture.

"Refugees are welcome in Stuttgart," Kuhn said, adding that Stuttgart was no place for people who discriminated against others. Kuhn also appealed to people of other cities to not give in and "become a tool for right-extremist Neonazis."

Protesters were also gathering in other German cities to rally against PEGIDA- an acronym for Patriotic Europeans against the Islamization of the West.

The cathedral in Cologne, one of Germany's most prominent landmarks, announced that it would switch off its floodlights during the PEGIDA's anti-Islam demonstrations on Monday, to challenge xenophobic sentiments.

The Union demanded that German politicians acknowledge the country as an immigration country and create the required infrastructure. This would include accommodating the refugees and a speedy and just process for asylum seekers.

Researchers of German political parties in the parliament have also asked for a new orientation for Germany. Migrants should be able to find a place as equal citizens, Werner Schiffauer, head of the Council of Migration told German news agency dpa.

"It is important that we redefine the word, "We Germans," Schiffauer said.