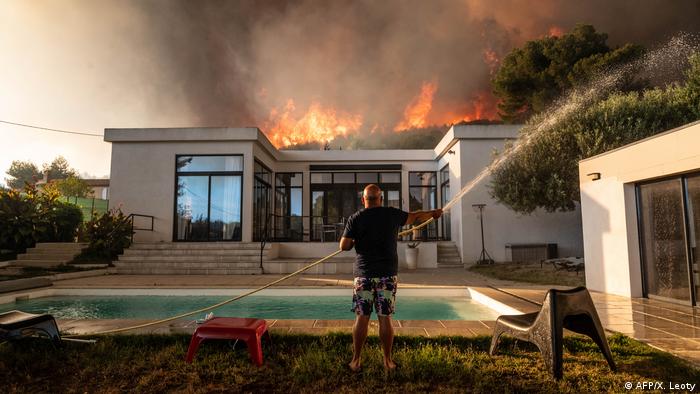 Raging fires in the south of France on Wednesday left at least 22 people injured, destroying several businesses and forcing the evacuation of 2,700 people.

Tourists and nursing home residents were among those displaced as they fled from forest fires that raced across a vast area near the southern French city of Marseille, officials said.

After the fires broke out on Tuesday, flames swept through residential areas and multiple campgrounds.

Eight campsites near the towns of Martigues, where the fire erupted, and Sausset-les-Pins have been evacuated, by land and sea, "as a preventative measure", the fire service said.

Some 1,800 firefighters, in the air and on the ground, were struggling to contain the blazes after more than 14 hours trying to bring the fires under control.

Eight civilians and 14 firefighters suffered minor injuries in and around Martigues, the fire service said. Blazes in the towns of Port-de-Bouc, Aubagne-Carnoux, Gignac-la-Nerthe and Fontvieille were eventually brought under control.

Winds are expected to continue throughout Wednesday, along with dry and hot weather across France. As a result, authorities have banned any controlled fires in the area or construction work involving sparks or hot equipment until the fires are extinguished.

Interior Minister Gerard Darmanin is at the site and as firefighting teams were sent in from other regions to help.

What caused the fires to erupt is still not known, authorities said.

A volunteer church worker has admitted to starting three fires inside a 15th-century cathedral in the French city of Nantes. His lawyer says his client "bitterly regrets his actions" and is "consumed with remorse."