They Care - People Who Make a Difference

Giving slum dwellers a voice, educating orphans or protecting nature - numerous Africans make our world a better place every day. Meet the "People Who Make a Difference" in our new series. 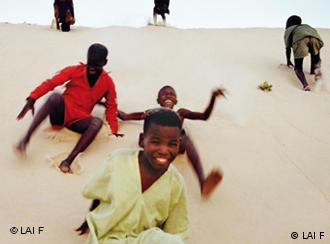 Making Africa a better place for children - one of the ways people make a difference all over Africa.

David Kimaro is 26 years old and has thirty children. That makes him an exception to most other people of his age. However, the children are not his own: They are orphans he cares for. His parents had already adopted a number of children who had lost their parents. And David decided to dedicate his life to the same cause. He's the founder and director of the Living Water Orphanage in Arusha, Northern Tanzania.

"People Who Make a Difference" is your gateway to meet David and people like him - young Africans who are spending their lives helping others. For instance, by running a media outlet that gives slum dwellers a voice, by putting the latest news on a blackboard in the middle of civil war or by trying to become professional athletes to help their communities.

If you have always wondered what you can do to help people in your country, Learning by Ear's new series will give you ideas and inspiration!