'They are living in hell'

Massouda Jalal, Afghanistan's former Minister for Women's Affairs, talks to DW about the plight of women in Afghanistan and her plans to form a political party focused on women's affairs. 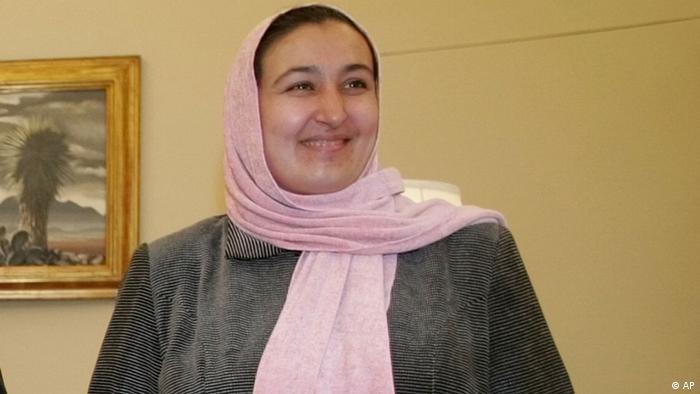 In 2004, Massouda Jalal - then Afghanistan's Minister of Women's Affairs - stepped down from her post to run against former boss Hamid Karzai in the country's presidential elections.

Though she lost by a wide margin, the sheer fact that a woman ran for the highest office was enough to give her contemporaries hope that women's rights - arguably the war-torn nation's biggest sore spot - would finally, with US influence, come to fruition.

On a recent blustery day in Kabul, with a turquoise animal-bring scarf wrapped tight around her head, Jalal was perched on the sofa at her home near the capital's diplomatic area.

Just three weeks later, the Taliban would unleash a series of coordinated attacks in the neighborhood, raising fears that Afghanistan will return to its old, more traditional ways once American troops leave in 2014.

One of the biggest concerns is a slide in women's rights. A report released in March by Oxfam International said that 87 percent of Afghan women have experienced physical, sexual or emotional abuse.

Jalal, who runs the nonprofit Massouda Jalal Foundation from her living room, is trying to stem the tide. She is not alone. The former minister hopes to start a female-centric political party in the next few years. In a cupboard, she already has stacks of paper - half of the 10,000 signatures needed to bring it to motion.

DW: What's early reaction been to the idea of a female party?

Massouda Jalal: We'll focus on women. People have been bringing in their registration cards. It [could] give them safety, security, position.

What does it say about your country that women have been immolating and self-harming in greater numbers than ever, even with the US here?

The perpetrators of immolation are further in power. There's no courage on the victim's part to approach the law. There's a certain fear that has not been broken. The way out is for us to stop terror groups, empower women, and push them into politics. We must give them power.

And education? Especially as it concerns their own bodies.

Women who immolate don't realize they'll be covered in burns for the rest of their lives. I met one woman who had self [inflicted] burns down one side and burns from hot water thrown by her husband down the other side of her body. And then he burned her with acid.

How do you even begin to get women to the next level?

We have to bring transformation to the relationships between men and women. We need access to psychological healthcare for women. We need to put our constitution into practice. We have to make our political power gender-sensitive. The world should be helping the Afghan people get rid of terrorism and give us a civil government with women and men participating equally.

President Karzai said recently that a man has a right, in certain cases, to beat his wife.

It's a constitutional crisis. It's saying, 'you [women] are secondary.' Sharia law empowers males.

But in some houses, women actually have more power financially, right?

There are more than one million male addicts in Afghanistan, and in these families women are the breadwinners. And they take care of the children. But they still do not have basic rights.

As women become better educated, is their social situation deteriorating?

All these years and $300 billion [in aid], so why is the situation for women getting worse and worse? They are living in hell - they don't expect happiness. Even if there are more women now in school and working in an industry like media, there is more pressure - and the best opportunity always goes to the man. And he has the ability to marry another women, so we are disposable. Sixty to 80 percent of marriages are still forced, but I haven't heard of one perpetrator being brought to justice in a child marriage. Violence is rising. Within the tribal structure, there is very little place for women. It's a male-dominated social and political structure.

When I was Minister, there was an attack every day - I didn't sleep one good night. There's very few women now in the Palace, they mainly belong to extremist parties.

More than 100 schoolgirls have been rushed to hospitals in northeastern Afghanistan after drinking what is feared to be poisonous water from a tank at their school. (18.04.2012)

Afghanistan is reeling from a spate of Taliban attacks against Western targets. Locals fear that the Taliban will once again gain control of the country once international forces leave. (17.04.2012)