′These children′s disease leads to the moral and economic ruin of their families.′ | World | Breaking news and perspectives from around the globe | DW | 21.12.2011

'These children's disease leads to the moral and economic ruin of their families.'

Children's cancer rates have risen sharply in Iraq's Basra province. The area held a key position in the frontline of wars over the past 30 years. A connection between the two can be made, says a children's cancer NGO. 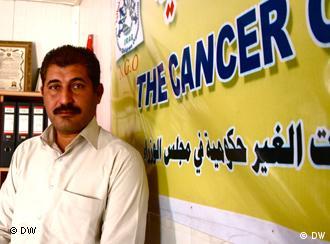 Laith Shakr al-Sailhi also has a child suffering from cancer

Laith Shakr al-Sailhi heads the Children's Cancer Organization of Iraq. The NGO is responsible for providing moral and psychological support to thousands of families struck by cancer in Basra.

DW-WORLD.DE: Why do you think there is such a high number of children with cancer and birth defects in Basra?

Al-Sailhi: Due to its huge oil reserves and strategic position, Basra has always been badly hit by the wars in Iraq. Here, the environmental disaster of the polluted waters of the Tigris and Euphrates after crossing through Turkey, Syria and Iraq is compounded by the oil refineries' emissions and the lack of control over imported food. Much of it arrives in very poor condition.

Furthermore, the blockade we suffered after the Gulf War boosted malnutrition among our children. That also affected their immune systems, leaving them virtually defenseless against any environmental aggression. However, I think we must look for the main reason in the last two wars. It's been extensively reported that Americans tested forbidden weapons here, such as depleted uranium and white phosphorus.

What are the challenges faced by a local family hit by the disease?

Although the treatment and medicine here are free, most families come from rural areas and have no money for transport. Many are forced to choose between going to work or staying with their sick children. One of our goals is to provide psychological support to those families. Women often spend two months in the hospital away from their family at a time in which they should stay together to face such a difficult situation. In a way, we could say that the disease has also boosted divorce rates among the local population. We have also detected a strong feeling of guilt among many parents for their children's cancer or birth defects. In rural areas, it is easy to find parents who feel directly responsible for the tragedy as "transmitters" of the disease.

Yet some children have managed to overcome the disease, haven't they?

Of course, but back at school they are often stigmatized because the other children, wrongly, fear a contagion, which is impossible. Moreover, it's very difficult to reintegrate children who have overcome cancer back into the classroom because their weakened immune system prevents them from staying in a room with 50 others for six hours a day.

Is there really any infrastructure to cover the needs of these children and their families?

90 percent of children arrive at an advanced stage [of cancer] because we haven't got the equipment for an early detection of the disease. Besides, many children die because of negligence at the hands of their families. They do not realize how serious the disease is until it is too late. In Basra, we are still waiting for the release of an x-ray machine which has been stuck in the port for the last nine months. There are only two in the entire country: a new one and a very old one, both in Baghdad. Getting an appointment for one of them can take up to six months and time is never on the side of the patients.

These children's disease leads to the moral and economic ruin of their families. Those who can afford it pay $5,000 (3,800 euros) for treatment in Iran, $7,000 in Syria or $12,000 in Jordan. Today, families are flocking to Iran for their children to be treated. Many of them are sleeping in the streets because they can't afford to pay a hotel room.

A British inquiry into the death of an Iraqi detainee has sharply criticized the conduct of British soldiers. But the growing number of Iraqis who claim they were mistreated could point to broader systemic abuse. (08.09.2011)

While the security situation in Iraq appears to have improved in recent years, the latest attacks resulting in more than 60 deaths have focused the attention back on Iraq again, says Iraq expert Jochen Hippler. (17.08.2011)