British Prime Minister Theresa May has called for national unity, exactly a year ahead of Britain leaving the EU. May was speaking during a whistle-stop tour that took in England, Northern Ireland, Scotland and Wales. 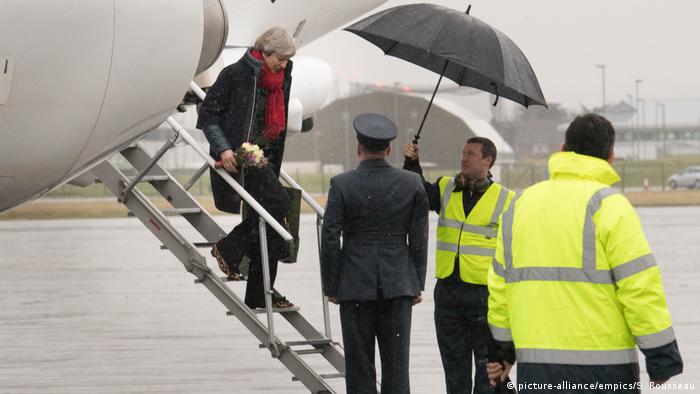 Prime Minister Theresa May urged British people to get behind Brexit on Thursday, claiming that the departure of Britain from the European Union presented "opportunities for the future."

The prime minister was speaking on a rapid tour encompassing England, Northern Ireland, Scotland and Wales.

"Brexit provides us with opportunities," May said while visiting a weaving firm in southwestern Scotland. "I want to see us coming together, the four nations across the United Kingdom.

"It is in our interests to come together and really seize these opportunities for the future," she said.

May visited a parent-and-toddler group in the northeastern English city of Newcastle, met farmers near the Northern Irish town of Bangor, and she spoke to Welsh business representatives in the resort town of Barry – all on the same day. She rounded the trip off by meeting Polish citizens in London for tea.

May posted a record of her stops on Twitter.

Talk of another Scottish referendum and the effective creation of a customs border in the Irish Sea have raised concerns about the long-term integrity of the UK. However, speaking ahead of her whirlwind tour, May said she was confident the United Kingdom would survive the process.

"I am determined that as we leave the EU and in the years ahead, we will strengthen the bonds that unite us," May said. "I have an absolute responsibility to protect the integrity of the United Kingdom as a whole."

While May was on a tight time schedule for her visits, her government also faces a considerable amount of work to reach a deal with the EU that would ensure an orderly exit from the bloc.

Britain formally announced that it would be leaving the EU on March 29 last year with a letter invoking Article 50 starting the clock on a two-year exit process. Officials from the EU and UK have tentatively agreed to a transition period that will last until the end of 2019.

In the June 2016 referendum, 52 percent of UK voters opted for Britain to leave the European Union.

While the majority of voters in England and Wales backed Brexit, most in Scotland and Northern Ireland wanted the UK to remain in the EU.

Scotland and Wales last week passed bills demanding that powers brought back from Brussels should go to Edinburgh and Cardiff, respectively, rather than stay with the government in London.

However, the greatest sticking point was over the frontier between Northern Ireland and the Irish Republic, which the EU has insisted must not become a hard border.

While all sides want to avoid imposing checks at the frontier, a solution has yet to be found that would not involve Northern Ireland staying in the Customs Union along with the Republic. This proposition, however, has been deemed unacceptable by the province's pro-British and pro-Brexit Democratic Unionist Party, which is propping up the minority government of May's Conservative Party in the UK Parliament.

rc/sms (Reuters, dpa, AFP)Each evening at 1830 UTC, DW's editors send out a selection of the day's hard news and quality feature journalism. You can sign up to receive it directly here.

A year after the Brexit referendum, Britons are frustrated at the lack of progress and certainty. And the strict two-year timetable imposed under Article 50 means that the clock is ticking. (19.06.2017)