Hans Neuenfels returned to the Bayreuth Festival in 2011 to polish up his production of "Lohengrin" for a second year. He talked with DW about the insanity, ecstasy and humility involved in staging Wagner. 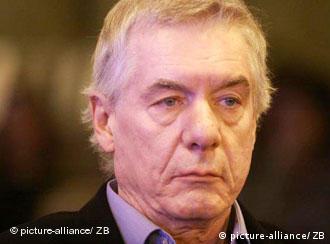 Hans Neuenfels is one of Germany's most controversial and well-known theater and opera directors. His version of Mozart's "Idomeneo," staged in 2006, even raised fears of provoking Islamist attacks.

At the 2010 Bayreuth Festival, Neuenfels directed Richard Wagner's "Lohengrin," which returns to the stage in 2011. Transmitted live to a big screen at Bayreuth's town square, it will also be broadcast on the television channel Arte and worldwide as a live stream online. The set takes its cues not from the Middle Ages but rather from an animal testing laboratory. The choir, a number of extras and a few soloists are decked out in rat costumes.

Deutsche Welle: The music in "Lohengrin" appealed to Bavarian King Ludwig II but also to Adolf Hitler, who said it inspired him. When you listen to this music, does it inspire you in any extraordinary way?

Hans Neuenfels: I've realized that Wagner examines Germany in a very conceptual way - in terms of patriotism and the dangers of denunciation, of provincialism and closed-mindedness, and of an almost hysterical enthusiasm for some things. Wagner was incredibly analytical and used his music to deconstruct the concept of being "German" while handling the subject ironically at the same time. It's the task of artists in each era to cast Wagner's work in the right light. We tried to do so by using the image of this rat's nest. There really is a difference between a rat crooning about the "German homeland" and "being strong" as opposed to someone on stage in traditional German dress singing that kind of text.

In your production, it's not always clear where our sympathies should lie: with the animals or with the people…

It's less about sympathy and more about who comes into focus. Most of the attention goes to the soloists, and they're treated psychoanalytically. The mass, the collective, the choir, which are portrayed as rats - that's how we represent the back and forth between various opinions and gut instincts.

It's the job of each generation of directors to put Wagner's work in the right context, says Neuenfels

Lohengrin, the protagonist, is a messiah figure. But in history, we know that ostensible saviors have often ushered in catastrophes. Do you believe in the possibility of a savior in our lives - of a person or figure who gives us perspective?

Yeah, there was Gandhi, Mother Teresa and such people, Einstein too. Some people - including artists - can become role models. They impress us with their sense of freedom and dignity.

But at least in Europe, I think the disastrous notion of a single ruler or generally of a savior figure has run its course. I believe that redemption only functions in terms of individuals and not collectives. As soon as it is used to encompass entire groups of people, there's always the danger of an uncontrollable mass movement taking hold.

Some directors have been unable to really get a grip on "Lohengrin." That wasn't the case with you. But still I'd like to know if you really had to wrestle with the work. 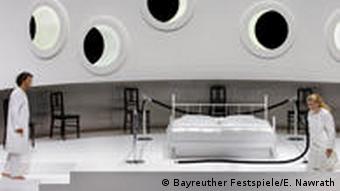 An animal testing laboratory is the central backdrop in Neuenfels' production

My team and I had an incredibly concentrated and very intense - almost ecstatic - initial phase. Then we came up with the laboratory setting. The whole thing is supposed to look like an experiment. In it, the character Lohengrin is the last point of contact. He's been sent from the grail to take up contact with this very sick world one last time. Once we got to that point, we'd turned the corner and could work freely on countless details. Directing really takes you to the absolute limit - it's almost impossible in a sense. But once you've gotten there, it's a really magnificent and unique experience. Every staging should take the director to the brink of insanity. And then comes the next one.

To paraphrase Goethe, Freedom is to be found within limits. As an interpretative artist, do you welcome the challenge to stick to the score, or does that hamper your creativity?

Well, for me, the "limitations" in opera have freed me more than constrained me. I hope that courageous experimentation will continue in Bayreuth and that people will continue to exploit the potential for adventure that Wagner left for his successors.

Do you see the Bayreuth Festival as continuing to develop interpretively and that directors will have more creative license, for instance? 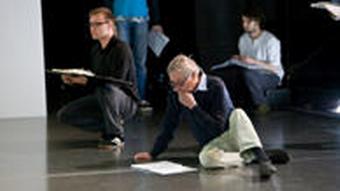 Yes. For me, Wagner is a great composer but also one of the most unrecognized. Not in terms of what's been written about him or how much he's been analyzed, but in terms of the interpretation of his operas. It's different with Mozart, Verdi, Rossini and others. I think he remains a tough nut to crack. We decided we weren't going to be intimidated by Wagner. He should be experienced directly, with a sense of fun and pleasure. Wagner's works have been performed here for decades, and a significant number of the listeners know his operas by heart. So it's possible to go off on unusual tangents without a lot of explanation.

But that's not to be understood as a destructive approach, where the music is just used as material. I think that the unity of plot and music in Wagner can be infused with new values again and again, but it still has to be accepted as Wagner's own creation. That is art. And art is arrogant, it's elitist, and there are very few people who can really do it. Wagner could. So it follows logically that those who interpret his work should do so with a sense of humility. If the result is that the original material, whether it's the music or the texts, can scarcely be recognized, then I think that's not only horrible and distasteful but also quite arrogant and traitorous.

Mermaids strap on rollerskates, and dragon's blood tastes just like ketchup. At the Bayreuth Festival, Richard Wagner's "Ring" is geared to kids, tapping into a musical trend. The future looks rosy for children's opera. (11.08.2011)

Music is like food and wine, says conductor Christian Thielemann - regional differences make it enjoyable. Currently busy at the Bayreuth and Salzburg Festivals, Thielemann is gearing up for his new position in Dresden. (04.08.2011)

Focus: History and histrionics at the milestone 2011 Bayreuth Festival

2011 marks the 100th Bayreuth Festival, a celebration of Richard Wagner's musical legacy. Get to know the divas, unusual productions and high-society guests that make up one of the world's most famous opera events. (29.07.2011)