The vast gulf between Russia and Ukraine | Europe| News and current affairs from around the continent | DW | 28.01.2016

The vast gulf between Russia and Ukraine

Russia has been sending conciliatory signals to Kyiv, but many Ukrainians are skeptical. The general consensus among Ukrainians is that a revival of the old friendship with Moscow will be difficult. 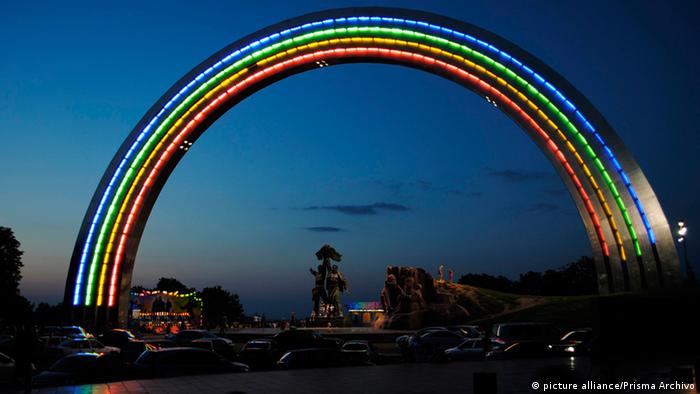 The gigantic metal rainbow still stands on the hilly bank of the Dnipro River in Kyiv. Built during the Soviet era, the monument is a reminder of the "union of Ukraine with Russia" in 1654, when Ukrainian Cossacks sought protection from the czar in Moscow. Since the Russian annexation of the Crimean peninsula and the war in eastern Ukraine, the monument pays tribute to something that no longer exists: friendship between the two countries.

The sculpture shows solidarity between a Russian and a Ukrainian. Today, the base of the monument is adorned by obscene words directed at Russian President Vladimir Putin.

Serhiy Zelowalnik would like to have the arch demolished. "What kind of a friendship is it, when Russian troops have come here with tanks," defiantly states the former chief architect of the Ukrainian capital in an interview with DW in September 2015. However, authorities in Kyiv have probably decided that the monument – "the yoke" as the people derisively refer to it – should stay there. In the eastern Ukrainian city of Kharkiv, however, a column symbolizing Russian-Ukrainian friendship was dismantled in November.

Yet the Russian side has been increasingly sending signals of reconciliation to Kyiv. "In the end, normal relations between our countries will certainly be restored," said Nikolai Patrushev, head of the Russian Security Council and Putin confidante, on Tuesday in a newspaper interview. Similar messages were also heard from the Kremlin and from the Russian foreign ministry. "Moscow is ready for a constructive dialogue with Kyiv." In the core issues, however, Russia remains adamant: the status of Crimea is not negotiable.

At the end of December a "page of friendship" went online in Russia. The URL already suggests that Russians and Ukrainians are one people (www.we-are-one.ru) and should thus put conflicts aside. The page portrays itself as a platform "without politics and propaganda" and promotes a direct dialogue with citizens. It is unclear who is behind the project – there is no site notice on the website.

Russian embassies in Ukraine still encounter great suspicion. "What friendship with Russia?" criticized a popular Ukrainian blogger at the beginning of January. "Look at our men who have lost arms and legs in this war! Stop looking at Russia as a 'brother nation'."

Quite a few people in Ukraine agree with the young Kyiv poet, Anastasia Dmytruk. Her poem addressing Russians after the Crimean annexation called "We will never be brothers" is still very popular in the country. The video of Dmytruk reciting the poem has been viewed on YouTube over six million times.

Volodymyr Paniotto does not believe that the Ukrainians will soon love the Russians again. "This is a very difficult process," said the director of the Kiev International Institute of Sociology (KMIS). Too much damage has been done. According to his institute's survey, the Ukrainians' positive attitude toward Russia declined dramatically after the annexation of Crimea: from 78 percent in February 2014 to 30 percent in May 2015.

Hostility and antipathy in Russia

At first glance it may seem all the more surprising that the negative attitude towards the other side in Russia is even more pronounced than in Ukraine. In a recent survey conducted by Moscow's Levada Center, 59 percent of Russians said their perception of Ukraine is negative. Only 27 percent disagreed. The reason for this was Russian propaganda against Ukraine and the people who live there, says Lev Gudkov, head of the center.

The Moscow sociologist views recent Russian overtures to Ukraine as a tactical maneuver. "I believe that these signals are a game, an attempt to soften the West's sanctions and the pressure on Russia," says Gudkov, "it does not help resolve the confict with Ukraine."

NATO member states have continued to cut back on defense spending, but at a slower rate, said NATO's Stoltenberg. His statement comes as the 28-nation alliance mulls a US request for AWACS surveillance aircraft. (28.01.2016)

The Munich Security Report, released ahead of the upcoming Munich Security Conference, presents a bleak strategic outlook for 2016. We could be witnessing the beginning of a more unstable international era. (27.01.2016)

Increasingly, Donbass refugees are returning home from Russia, but wherever they now go in Ukraine, they face problems. (21.01.2016)