The surprising success of Germany′s Green party | Germany | News and in-depth reporting from Berlin and beyond | DW | 12.10.2018

While Merkel's coalition dives in the polls, the Greens have been riding a wave of support. Decades after their rebellious arrival on Germany's political scene, the party is poised to become part of a new establishment. 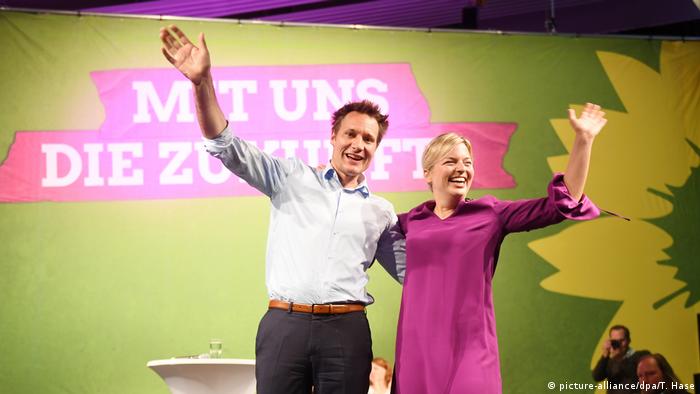 Bavaria's top Greens candidates, Ludwig Hartmann and Katharina Schulze, are set to score big for their party in Bavaria's state election on October 14

While political analysts and German media have focused on the rise of the far-right Alterative for Germany (AfD), another quieter political upset has been taking place on the other end of the political spectrum.

Despite receiving just 8.9 percent of the vote during the 2017 general election, Germany's environmentalist Greens are currently polling in second place both nationally and in Bavaria, where a key state election will take place on October 14.

When the party first entered German parliament in 1983, its radical environmentalism and Woodstock appearance shocked a post-war political system dominated by establishment parties.

Thirty-five years later, the Greens have grown up: They've traded in sweaters for slick suits, and eco-radicalism for realpolitik focusing on digital innovation and social cohesion.

"We no longer just consider solutions that are only important to five, six or eight percent of voters," Priska Hinz, environment minister in the state of Hesse and co-leader of the state's Green party, told DW.

"Rather, we broadly position our topics and solutions so that lots of people can get something out of it," she added. 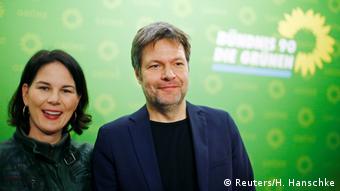 The surge in popularity is a testament to the course correction of current Green party co-chairs Annalena Baerbock and Robert Habeck, said Gero Neugebauer, a professor of political science at Berlin's Freie Universität.

Using rhetoric that marries traditional German culture with environmental conservation, Baerbock and Habeck, who have led the party since January 2018, have reimagined the trend toward nationalism currently gripping Germany.

Meanwhile, the pair has diversified the party's platform, calling for digitization in traditional industries like agriculture, and the bolstering of police forces and intelligence agencies after a spate of terror attacks over the past three years.

Now, the Greens are trying to replicate that success in Bavaria. A recent Bayerntrend poll indicated that the Greens could secure as much as 18 percent of the vote on Sunday.

Should the polls come true, the Christian Social Union (CSU), German Chancellor Anglea Merkel's Bavarian allies, will likely have to enter into a coalition with the Greens in order to remain at the helm in Bavaria. With one exception, the CSU has governed Bavaria with an absolute majority for more than 50 years.

"I think that people in Bavaria are starting to get fed up with the government and others who try to persuade them about what won't work and pepper them with hate," Katharina Schulze, one of the top Greens candidates in Bavaria, told DW.

More than anything else, however, analysts told DW that the Greens' future success rests on the demise of the nation's larger parties — namely Merkel's Christian Democrats (CDU) and the center-left Social Democrats (SPD).

Voters are fatigued with Merkel in her fourth consecutive term in office, not least because some believe her government bit off more than it could chew during the 2015 refugee crisis.

Backlash over the move has aided the rise of the anti-immigrant Alternative for Germany (AfD), now the nation's third-largest faction in parliament and the biggest opposition party there.

"There are a lot of similarities as to why the Greens and the AfD are so strong — both are benefitting from the unpopularity of the other parties," Olaf Boehnke, a senior adviser in Berlin with Rasmussen Global, a Brussels-based think tank, told DW.

Throughout it all, Merkel's three-time coalition partner, the SPD, has lost its ideological center. Once a socialist worker's party, the SPD now caters more to middle-class business interests — a repositioning that doesn't vibe with the party's declared focus on social justice policies, said Boehnke.

The SPD is now polling at just 15 percent — a historic low for a party that secured 40 percent of the vote only 20 years ago.

"They lost their trust that they can run the country," said Boehnke. "They're still in limbo."

By and large, the Greens are the greatest benefactor of the demise of Germany's catch-all parties. Half of the Greens' current supporters voted for the SPD and the CDU in 2017's parliamentary elections, according to a Forsa Institute poll.

But that doesn't mean the Greens are on their way to becoming a catch-all party, said Neugebauer.

"We're no longer talking about catch-all parties because they don't exist anymore," he said, particularly in the current era of polarization and fragmentation in German politics.

Instead, the Greens' success in adapting to the current political moment will position them as the obvious go-to coalition partner for the languishing establishment parties of the past — and a political foil to the burgeoning success of the AfD.