The secrets of the Luxor mummies revealed | Culture| Arts, music and lifestyle reporting from Germany | DW | 28.11.2018

Archaeologists in Egypt have made one sensational discovery after another in recent months. They just opened a 3,500-year-old sarcophagus — and cameras were there to capture what they found inside. 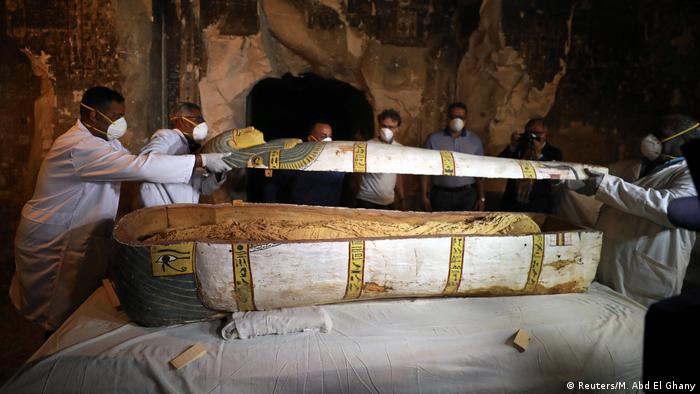 History is at your fingertips in the Egyptian temple city of Luxor. That became even more true in November 2018, after French and Egyptian archaeologists discovered a new burial site in the necropolis of Al-Assasif near Luxor and revealed to the press what they discovered.

On November 24, a solemn ceremony took place in front of the temple of Hatshepsut in Luxor: The Egyptian Minister of Antiquities Khaled El-Enany proudly told the press about the find and the burial chamber's "very beautiful paintings." The real sensation, however, was the 3,500-year-old sarcophagus and its contents. 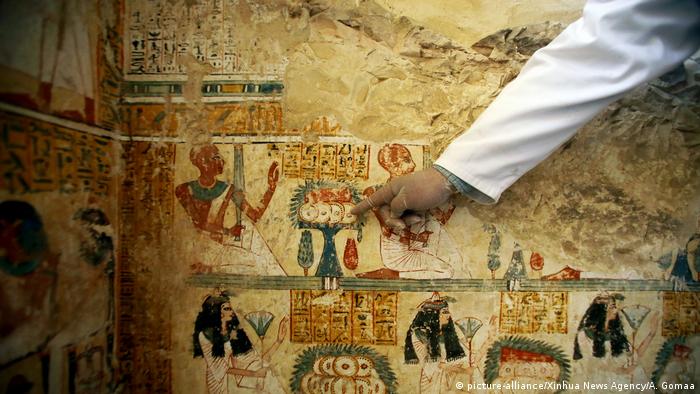 Drawings that have survived the millenia

Scientists and the media were gathered in the burial chamber to witness the opening of the sarcophagus. They all wore protective masks to protect against toxic mold. The lid of the elaborately decorated sarcophagus was carefully lifted — and  revealed the mummy of a woman who died about 3,500 years ago. She was from what is referred to as the 18th dynasty, a period that dates to between the 16th and 13th centuries B.C.

But that's not all, the scientists found more sarcophagi from an even older period: Buried beneath 300 meters of debris and ruins, they discovered the grave site of Thaw-Irkhet-if, the senior official who oversaw the mummification process about 4,000 years ago.

The most recent discoveries emerged during a series of excavations that have brought to light one sensational find after another. 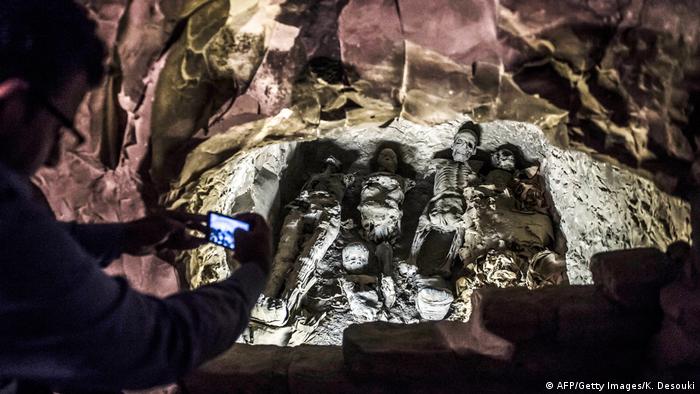 Mummies at the Al-Assasif necropolis

April, 2017: Archaeologists discovered eight mummies, colorful wooden sarcophagi and about 1,000 funerary clay figurines in a well-preserved tomb dating back to the era of the pharaohs. Age: About 3,500 years.

February, 2018: In the city of Minya, about 250 kilometers south of Cairo, an Egyptian-German team discovered an ancient necropolis, complete with old burial chambers filled with numerous coffins, mummies and artifacts. Archaeologists say excavations at the site are expected to continue for another five years, so this is only the tip of the iceberg.

At the same time in Giza, archaeologists found a grave that is approximately 4,000 years old, with a burial chamber belonging to a priestess named Hat Bet. "The priestess was highly esteemed in her time," said Minister of Antiquity Khaled El-Enany, adding that the tomb originated from the time of the 5th dynasty. 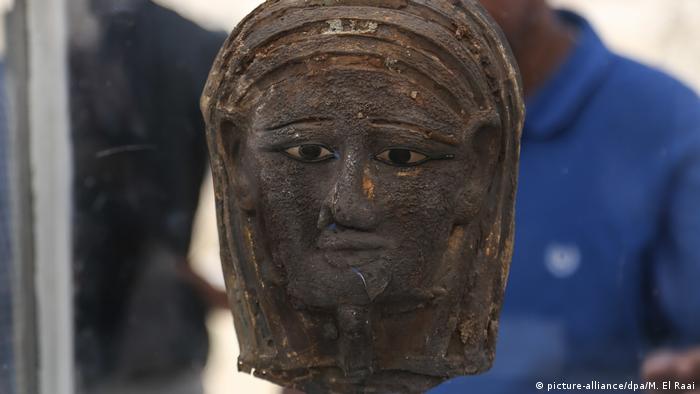 Finding a death mask made of metal is rare

July, 2018: In Sakkara, south of Cairo, a team of researchers from the University of Tübingen found a partially gold-plated death mask that is about 2,600 years old. It was a very rare find, since most death masks made of gold or silver were stolen in ancient times by grave robbers. Only very few mummy masks made of precious metal were found by archaeologists.

Like anything that has anything to do with death, mummies fascinate and repel people.

In the 19th century, selected social circles in Europe — English Lords were at the forefront here — had what they called mummy parties, where archaeologists would proudly present their finds, unwrapping Egyptian mummies to amuse the guests.

Today, a mummy find is more than just a gruesome sensation. The DNA traces found in the bones and remains reveal precious information about the human being who died thousands of years ago. X-rays and tomographic examinations can determine the cause of death, and offer a glimpse into people's lives, what they ate or what made them sick, whether they were very active, whether they ate more meat or more grain or whether they had a herniated disc or tuberculosis, for example. Researchers can even discover tattoos or find out what color someone dyed their hair. Many body features also indicate the social status of the deceased. 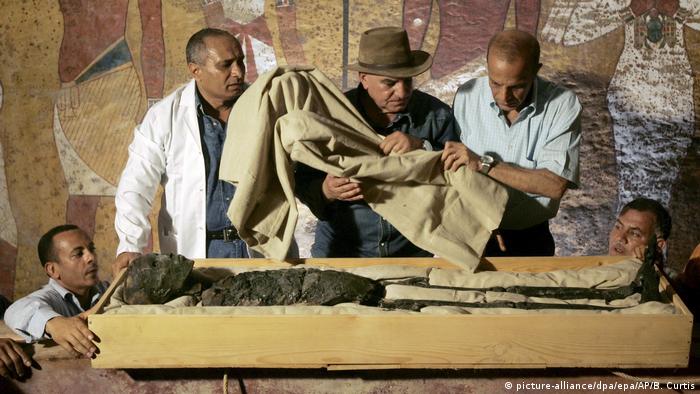 The mummy of Egyptian pharaoh Tutankhamun was uncovered in 2007

Bodies mummify in different ways. The 5,200-year-old glacier mummy nicknamed "Ötzi" simply freeze-dried after the man was fatally injured by an arrow.

In arid regions, bodies are mummified by dry heat, high soil salinity or simply in the sand.

A bog body is a cadaver that has been naturally mummified in a peat bog. Through the bog's acidity, the bones decalcify almost completely; the bone structure dissolves while the bog peat's humic and tannic acids tan and thus preserve the skin, tissue, hair, cartilage and fingernails. Once found, a bog body must be quickly preserved again, otherwise it decomposes quickly in the air.

Mankind also came up with different preservation techniques. In ancient Egypt, embalmers were set for life. They worked on a corpse for up to 40 days, removing the organs, stuffing the bodies with straw, soda bags, herbs and spices, and adding fats, resins or honey. To avoid damaging the skull, small hooks were used to pull out the dead person's brain from his nose, a tested method of side-stepping decomposition. Finally, the bodies were wrapped in resin-soaked linen.

Bodies were also preserved in other cultures around the world by sewing them into animal skins, covering them in plaster and embalming, but the Egyptian mummies are definitely the most famous ones — zombies wrapped in linen cloth remain a common figure horror films. 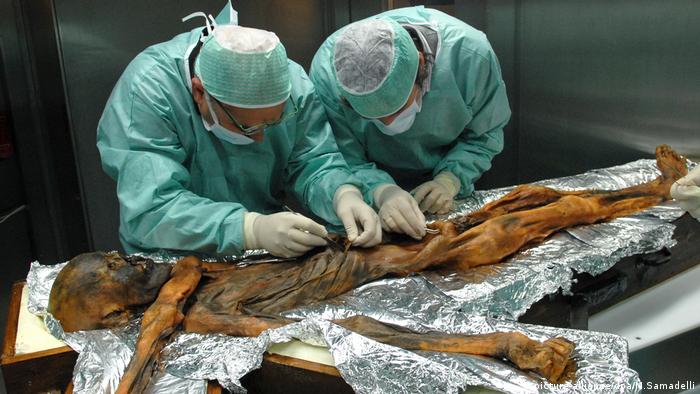 Scientists know exactly what Ötzi ate before he died

Ancient Egypt is fascinating not just for its mummies. Artifacts from antiquity, preserved incredibly well by the desert sand and the dry heat, fascinate scientists and visitors alike. In recent years, Egyptian authorities have initiated a number of ambitious archaeological projects. The spectacular finds from the excavation areas around Cairo and Luxor are good news not only from a scientific point of view — they could also attract more tourists to the country, as their numbers have dropped of since the "Arab Spring" of 2011.

A sealed tomb, believed to be some 4,400 years old, has been discovered at the ancient Egyptian necropolis of Saqqara. Archaeologists also unearthed mummies of cats and scarabs in other newly found tombs. (10.11.2018)

In the Egyptian Museum since the 1900s, the mummy affectionately known as Fred has provided scientists with the recipe used for ancient embalming. It also shows bodies were embalmed 1,500 years earlier than thought. (16.08.2018)

Mummies no longer walk among us, but now we can walk among them — at the Roemer and Pelizaeus Museum in Hildesheim, that is. There, technology is being used to strip away a mummy's layers, uncovering its very bones. (28.06.2018)