The price of politics in Afghanistan | World| Breaking news and perspectives from around the globe | DW | 04.12.2011

The price of politics in Afghanistan

Young politicians in Afghanistan are fighting against deep-rooted cultural and religious prejudices. But despite the many threats and intimidations they face, young Afghans are fighting to make their voice heard. 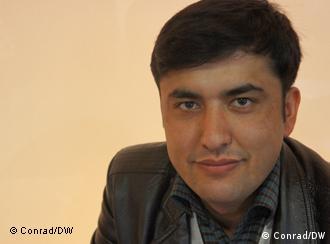 An armed security guard and the fear of another assassination attempt accompany Mahmood Said Pahiz wherever he goes. And yet when his girlfriend informed him that he would have to choose between marrying her and staying in politics, he told her: "I can't. It's my life." He shrugs. Today, he is single.

Mahmood is 25 years old. He joined the Afghan Solidarty Party in 2007 while he was still studying French at Kabul University. As party spokesman he organizes student rallies in Kabul for democracy and against Afghan President Karzai - whom he calls corrupt - and the presence of foreign troops in Afghanistan. The demonstrations are small, but he hopes that more young people inspired by what is happening in the Arab world will join.

In February he spent a week in jail, after he was caught red handed defacing election posters: "I was throwing red ink on the posters of the warlords who wanted to be elected to parliament." He spent sleepless nights in a damp cell, "but we weren't mistreated."

'They will kill you' 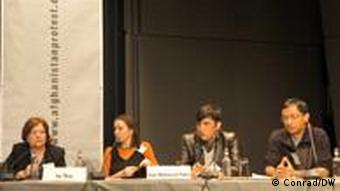 At least not this time. His parents try to persuade him not to be politically active: "They will kill you," they warn. Mahmood is currently in Germany, speaking out against President Karzai and the foreign troops. The weather, he says, the first smile of the interview, is just like Kabul: cold and damp. His parents begged him not to go: "They will put you in prison when you return."

In a society that is still conservative, young people are expected to listen and submit to their elders. But Mahmood told his parents he would continue to do his political work and went to Germany. They have grudgingly accepted, he says, and pray for his safety.

'They threatened to rape me'

Malalai Joya is wearing a bright red scarf and small badges: "No to NATO" and "Out of Afghanistan now". Her family, too, prays for the 32-year-old's survival. Malalai was once the youngest member of the Afghan parliament, until she was banned from parliament in 2007 for calling the Afghan parliament a zoo and accusing President Karzai of sheltering criminals and warlords. "They even threatened to rape me inside parliament."

She is forced to move to different safe houses in Kabul every night and has survived several assassination attempts. "But I don't fear death, I just fear silence." A young woman working with her was kidnapped and raped. Malalai chokes her tears back, and then swallows hard. "But she came back; she wants to continue fighting for a better Afghanistan."

Like Malalai many female politicians face intimidation and worse. The independent Free and Fair Election Foundation of Afghanistan reports that in the run-up to the 2010 election many female candidates received threatening phone calls. In some provinces the Taliban distributed night letters - written public threats, warning women against running for office. The volatile security situation prevented many women from campaigning and raising funds in mass rallies for their campaign. 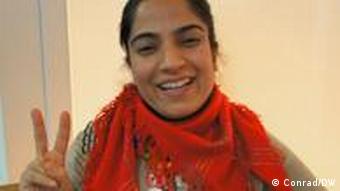 Malalai Joya: 'The members of parliament threatened to rape me'

Changes to the electoral law from 2010 mean that candidates have to pay a registration fee of $700 (520 euros), thus creating a financial barrier particularly for younger politicians. There are some 25 young parliamentarians, Mahmood says. Young people are politicized, he says, but are too afraid to become politically active. "It's not easy, our parents tell us not to be politically active. And there are so many threats", Masture Hares, a young Afghan journalist currently based in Germany, explains. Like her, many educated Afghans dream of leaving the country and moving abroad.

Parents hang posters of warlords on their walls

But some dare take up the struggle against a conservative culture. What gives her hope, Malalai says, are the young people trying to change things: "Parents hang posters of the warlords in their houses, but their children hang my poster or of another democratic representative on their walls." That, she says proudly, is a sign that things are slowly changing.

"In parliament the men told me: you're cute, you're young - you don't know anything." But she says the young generation experienced enough bloodshed and repression to know: Malalai's family fled to Iran and Pakistan and she secretly returned to Afghanistan.

"We know about Afghanistan - and we know what needs to change," she says forcefully.

The Afghan MP Malalai Joya has campaigned for human and especially women’s rights for years. Earlier this year, she was awarded the International Anti-discrimination Award 2009 in Rotterdam. Some have called the 31-year-old the “bravest woman in Afghanistan". (29.05.2009)

On Monday, world leaders will meet in Bonn to discuss the withdrawal of international forces from Afghanistan by 2014. For German peace activists, however, this is not fast enough. (03.12.2011)

Afghan delegates thrash out concerns ahead of conference

As foreign ministers prepare to discuss the role of the international community at a global conference on Afghanistan, delegates from the country itself have been meeting to discuss their concerns. (04.12.2011)