The Power of Rapeseed

Rapeseed oil is becoming a growing source of bio-diesel fuel for automobiles. But the plant oil is also being used to drive many European power plants. 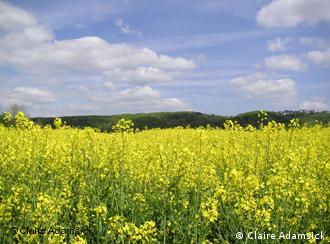 Rapeseed is a very efficient and inexpensive source of energy.

It's difficult for travelers in Germany's Rhine River valley to miss the fields of rapeseed checkered over the sprawling landscape, if not for their brilliant yellow color, then for their pungent odor.

But rapeseed is not just a feast for the senses. It also is a valuable source of energy. When combined with methanol, it yields rapeseed oil methyl ester. This is increasingly used as fuel in automobiles, although at this point, only about one to two percent of German cars are designed to run on it.

It is more common to find this plant oil as the primary energy source in many power plants. The combined heat and power plant at Rhinedorfer Harbor in Bonn was the first to use rapeseed oil methyl ester as its energy source. It is the largest such facility in Europe that runs on bio-diesel.

Two ship-sized engines whir and hum inside the plant at the Deutsche Bank 24 building on the edge of the Rhine River in Bonn. Built in 1997, the facility has a 600 kilowatt electrical and 700 kilowatt thermal capacity. Each week, it burns over 10,000 gallons of rapeseed oil methyl ester to supply this 165,000 square feet of office space with heat, warm water, and power. 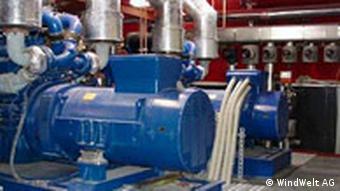 These two engines can supply an entire office building with heat, warm water and power.

Combined facilities like this one are substantially more efficient than traditional power plants for the simple reason that they retain the heat that is generated as opposed to releasing it into the atmosphere. The generator is also particularly eco-friendly because it uses refined rapeseed oil methyl ester as its primary fuel.

Rapeseed oil methyl ester emissions are neutralized when they're released into the environment, while other potentially harmful compounds are filtered through a single smokestack.

"The emissions from rapeseed oil methyl are very environmentally-friendly, in terms of its carbon dioxide balance," says Thomas Klodt, Chief Technical Officer at Windwelt, the company responsible for monitoring this and other renewable energy generators in the region.

"The same amount of carbon dioxide that is collected in rapeseed plants is released into the environment," he explains. "Other substances like sulfur or nitrous oxide are filtered out in the flue gas system."

A less expensive, yet sticky alternative

One of rapeseed oil fuel's key advantages is its price. The current German mineral oil tax law makes it about 20 percent cheaper than gasoline. It can also be argued that the rapeseed plant as a novel industrial crop promotes the sustainability of land use and increasing agro-biodiversity.

"The market for rapeseed oil is definitely expanding, and this is promoted by a German land-use law that requires 10 percent of farmland be used for non-food crops," Klodt says. "Farmers often plant rapeseed in this section and sell it as energy fuel." That 10 percent translates to some 750,000 acres on which rapeseed is cultivated to be later converted into bio-diesel. 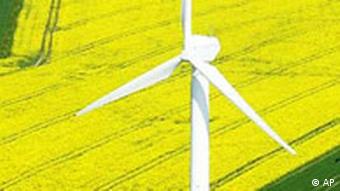 The market for rapeseed oil is expanding.

While it may be increasingly profitable for farmers to grow rapeseed, the oil has proven to be a rather sticky fuel to work with. Klodt says operating a generator fueled by rapeseed oil methyl ester is about 10 to 15 percent more expensive.

"Bio-diesel is not a completely problem-free fuel, due to the presence of resin in the oil," he explains. "The sticky resins can clog the fuel-injection tanks and jam the generator. We have to take extra precautions to ensure that they do not block the fuel-injection system. That means the plant must be carefully maintained and its operations constantly monitored."

The gift of the sun

The Bonn facility is an optimal setup for large buildings like Deutsche Bank 24. But the noisy engines will likely delay the introduction of combined heat and power systems into private homes.

Klodt and his colleagues at Windwelt are thus working to promote renewable energy sources more suited to homes, such as photovoltaic paneling.

"There is an increasing public awareness about the importance of renewable energies across Europe and in most parts of the world," he says. "We know that raw materials are limited, and are rapidly being exhausted, so we have to redirect our attention to the natural resources that are more or less inexhaustible, namely, sunlight."

Developing solar energy through photovoltaic paneling on rooftops and using the sun-fed rapeseed plants are becoming an increasingly viable form of regenerative energy.

Green Gasoline to Debut in EU

Drivers in the EU will soon be filling their tanks with a mixture of normal gasoline and more environmentally friendly biofuels. But is this a giant leap or merely a baby step towards a greener future? (January 9, 2004)