The Pope and Gay Marriage

Pope Benedict XVI recently spoke out against gay marriage, calling it a “trivialization of the human body.” Germans criticized him for that and DW-WORLD readers seem split on the matter. 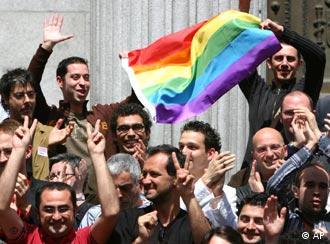 Spaniards celebrated the legalization of gay marriage in April

I am a believer myself and no church is going to dictate to me that I must now suddenly be anything else but gay, because I was born that. I feel that anyone should have the right to be what they truly are and here in South Africa we at least have a constitution that guarantees that. Why can the world not allow consenting adults to live their lives the way they are -- provided that it does not harm anyone and does not involve children? -- Pieter Niemand, South Africa

I totally agree with Pope Benedict XVI on gay marriage, and for that matter, Pope John Paul II, and every other pope since Peter. There is no moral or theological justification for the marriage of two people of the same sex. It is an anathema. Homosexuality is sin, just as fornication and other extra-marital sex is sinful. Marriage, by definition, is the joining of a male and a female. -- Michael Murphy

I believe that the Catholic Church is still in the middle ages. The world has changed and the church needs to change to align itself with what is going on in the world. I think gays should be allowed some sort of blessing/civil ceremony, if people's reactions to a marriage are so strong. They should be allowed to adopt children. They just want what we all want, life, love and togetherness in trust and love. -- Lee Ann G., US

Any couple who want to marry should be allowed to marry, regardless of sexual orientation, gender, ethnicity, religious and spiritual beliefs/practices, culture, etc. -- Nicole Raisin Stern, US 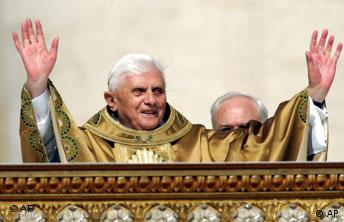 The more I hear of this Pope, the more I am considering becoming a Catholic. -- Chuck Reichert

I definitely disagree with the pope's views on same-sex marriages and homosexuality. The Pope should focus on the real problems in the world and the real problems in the Catholic Church. I feel like the church using homosexuals as a red herring to distract us from issues such as the child sexual abuse scandals in the United States. The Vatican immediately silences anyone who disagrees with the pope's stance on homosexuality and other social issues. The Vatican should discuss homosexuality and same-sex marriages rather than silence and bully those who disagree with them. Also, if the Catholic Church truly believes that homosexuals should not be discriminated against, then maybe they should teach tolerance and stop trying to block the Brazilian UN resolution that is meant to protect gays and lesbians from discrimination. -- Yasser Al-Saadi, Canada

Pope Benedict is as wrong on this issue as his predecessors were in sanctioning slavery for a great many centuries. I am a Catholic but on this issue the Church needs to understand that the passages in Scriptures traditionally interpreted as condemning homosexuality are based on a pre-modern understanding of heterosexuality as the status of all people. -- Thomas Murphy

As a psychologist and philosopher, it is obvious for me that the right to marry will do a lot of good for many gay men and women, and therefore for the well being of modern societies. The words of Benedict show that no serious reflection has occurred among Vatican theologians, who have been repeating the same thing for decades. -- Pierre Pelletier

As a non-Catholic Christian I totally support the position of Pope Benedict on the issue of gay marriage. I do not care what non-Christian religions do, but acceptance of gay marriage in the Church is an intolerable evil. It is no less an evil than the acceptance of adultery, bestiality or any other sexual sin. God has set boundaries for us Christians and we have a responsibility to remain within those boundaries. This issue is absolutely not about mercy. -- Charles Reichert, Canada

I wrote a letter, in October 2000, to Cardinal Joseph Ratzinger, then head of the Congregation of the Doctrine and Faith, previously named the Office of the Inquisition, showing that a careful reading of the Official Roman Catholic Catechism could support Gay and Lesbian Marriage. Section 2349 of the Catechism quotes St. Ambrose, the bishop that converted St. Augustine: "There are three forms of the virtue of chastity: the first is that of spouses, the second that of widows, and the third that of virgins. We do not praise any one of them to the exclusion of the others....This is what makes for the richness of the discipline of the Church." Infertile married couples are allowed "conjugal chastity" If the Roman church permitted Gay and Lesbian couples to marry, they would be under the same rule. -- Lisa Rodke

The German Green Party and a major gay rights group have criticized a speech by Pope Benedict XVI in which he said gay marriage was “based on a trivialization of the human body.” (June 8, 2005)