The politics of entertainment at Eurovision

On May 18, the 58th edition of the Eurovision Song Contest took place in Malmö. The organizers like to bill the pan-European contest as a pure entertainment show. However, it has never been completely apolitical. 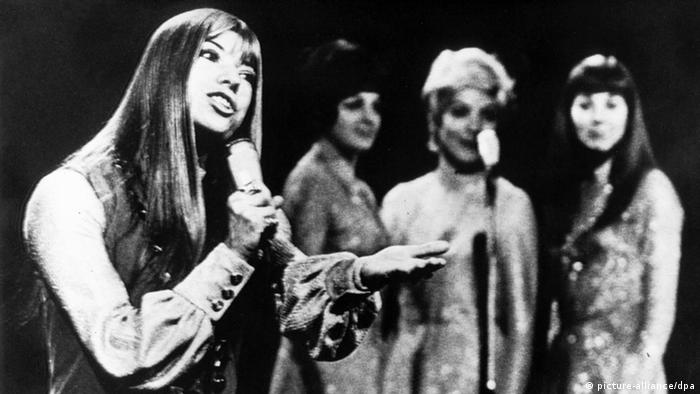 The rules at the Eurovision Song Contest (ESC) are clear. Organizers tell the participants: lyrics, statements and gestures of a political nature are prohibited. But even the idea of hosting a music competition, originally called "Grand Prix Eurovision de la Chanson Européenne," had a political background.

Participants from seven countries came to Lugano, Switzerland, in 1956 for the first Eurovision Song Contest - countries that had still been fighting each other in World War II only eleven years earlier. The fact that broadcasters from Belgium, West Germany, the Netherlands, Luxembourg, Italy, France and Switzerland jointly put together a televised competition served as a symbol for normalized international relations. 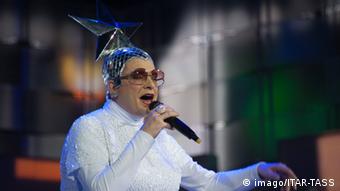 Germany took top honors for the first time in 1982 when singer Nicole won over audiences with "Ein bisschen Frieden" (A Little Bit of Peace). Songs about love, peace and friendship are particularly welcome at the ESC, while those that might offend other countries are kept out. The European Broadcasting Union (EBU), which directs the ESC, made that clear again in 2009. Georgia wanted to perform its entry "We Don't Wanna Put In" in Moscow, but the EBU said "nyet." Less than a year after the Russian-Georgian War, the play on words against Vladimir Putin was all too clear.

Two years prior, Moscow apparently felt a different song had offended its sensibilities. Russian television managers believed the Ukrainian female impersonator artist Andriy Danylko alias Verka Serduchka sang the words "Russia goodbye" during his 2007 Eurovision performance. Verka immediately vanished from the public eye, even though the performer had previously been present nearly every night in one TV show or another.

Controversy this year has swirled around the Macedonian duo Esma & Vlatko. Critics said their video clip suggested an imperialistic attitude and claims to political power over Macedonia's neighboring countries. But even before official protests from Greece or Bulgaria could come rolling in, the broadcaster in Skopje switched out the contested entry "Imperija" (Empire) in favor of the harmless "Pred Da Se Razdeni" (Before the Crack of Dawn). Allegedly, the public had called for this change. 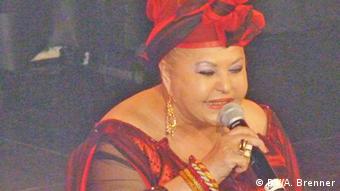 No gay pride parade in Moscow

Various Eurovision countries have raised objections to sexual minorities. Conservatives in Israel were appalled in 1998 when it became known that the transsexual singer Dana would compete on behalf of her homeland. That made her victory that much sweeter for her supporters in the Israeli and European LGBT community.

With the Eurovision Song Contest having always had a particularly passionate gay following, gays and lesbians in Russia wanted to hold a parade in Moscow to coincide with the 2009 ESC finale. But they were driven out by police.

That year's competition in the Russian capital went down as one of the most bombastic and expensive events in ESC history. For the government in Moscow, it was a question of honor. 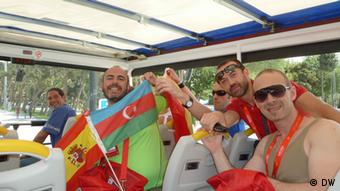 Fans headed to Azerbaijan in 2012 for the ESC

Then-Prime Minister Vladimir Putin turned up at the rehearsals. Among the acts he saw was the duo from Azerbijan that went on to win the ESC. Three years later, the contest hosted by Azerbaijan morphed into a personal affair for the president's family, with First Lady Mehriban Aliyeva in charge of the organization committee and the head of state's son-in-law appearing to sing on stage during an intermission in the finale.

A few weeks ahead of the 2012 contest in Baku, European media were involved in a hefty debate about whether a land that often violates human rights should be allowed to host the ESC. For a brief period, Europeans were taking a close look at what was going on in the oil-rich state on the Caspian Sea.

Suddenly, local human rights activists, opposition politicians and independent journalists had a chance to explain their views to the European press. But very little has changed in Azerbaijan since then. 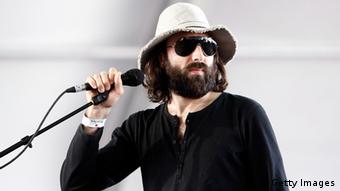 Sebastien Tellier shocked some in France with his English performance

In light of such discussions, disputes over language that have erupted in France seem comparatively small-minded. Trading the complex but graceful French title in exchange for "Eurovision Song Contest" was a slap in the face for some. The country has since made sure that French remains an official ESC language. When Sebastien Tellier warbled in English at the 2008 contest in Belgrade, French nationalists expressed outrage.

German politicians have also managed to get involved in the Eurovision Song Contest. Christian Wulff, then Lower Saxony's former Prime Minister, personally greeted Lena Meyer-Landrut at the Hanover airport when she returned home victorious from Oslo in 2010. Who knows how long "Lenamania" and the singer's ESC victory would have occupied the German media if Horst Köhler had not resigned as president one day later.

His successor, Christian Wulff, remained in the job not too much longer than Eurovision songs tend to stay in their fans' heads.

Cascada: 'At some point, I'll try to shut my mouth'

Natalie Horler, front woman and singer for German dance trio Cascada, speaks with DW about her preparations for the Eurovision Song Contest in Malmö - her chance to represent all of Germany, she says. (14.05.2013)

Listening in at Amsterdam's pre-Eurovision party

Amsterdam hosted a key event in the run-up to the finale of this year's Eurovision Song Contest in Malmö, Sweden. Nearly all of this year's participants presented their songs, giving listeners a sense of who may win. (20.04.2013)

The major players of the German music industry all convened in Berlin for the 22nd annual ECHO Music Awards. But is the event really comparable to the Grammys, or are critics right to call it too self-congratulatory? (22.03.2013)