The Nazi-hunters: How a slap in the face brought about justice | Culture| Arts, music and lifestyle reporting from Germany | DW | 10.05.2021

The Nazi-hunters: How a slap in the face brought about justice

A scandalous act changed the course of history in Germany. A new graphic novel tells the story of "Nazi-hunters" Beate and Serge Klarsfeld in poignant pictures. 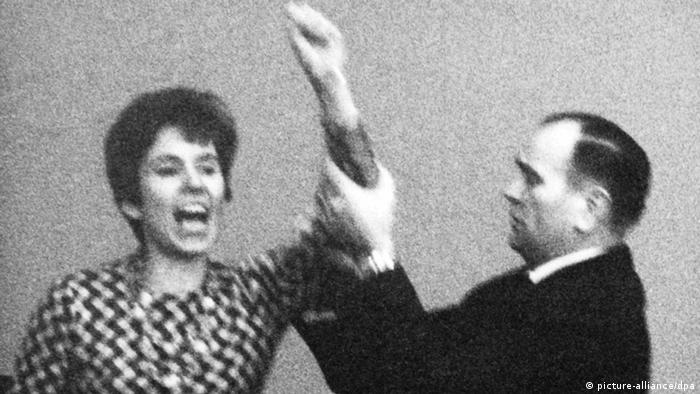 Beate Klarsfeld made history by slapping the German chancellor in 1968

In the comic, she is depicted sitting next to a friend in the car in the early morning of November 7, 1968 on her way to the conference of the Christian Democrats (CDU) political party — with a very unique mission.

Once she arrives, she uses a press ID to enter the hall packed with politicians.

The young German, who had lived in Paris since 1960, sets her sights on German Chancellor Kurt Georg Kiesinger — a former member of the Nazi party who is sitting dead center.

After distracting the security guard, she walks briskly along the rows of politicians until she reaches Kiesinger's seat.

Quick as a flash, she turns to the prominent CDU politician, slaps him across the face and shouts loudly, "Nazi, Nazi!!!" Cameramen and photographers from all over the world capture this moment, which makes history. 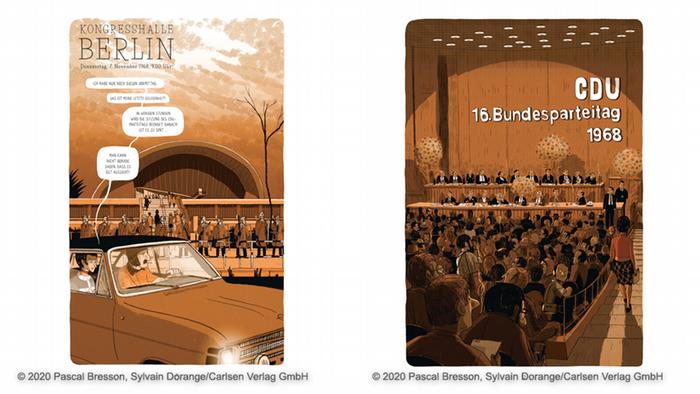 "I am Beate Klarsfeld and I am married to Serge Klarsfeld," she states, when interrogated by police. "And I am outraged by the injustice that old Nazis get away with in Germany."

The graphic novel form is well-suited to tell such a complex story."My scripts should be like screenplays," said author Pascal Bresson. "This is cinema on paper."

Even younger readers can be quickly drawn into the narrative by the filmic images, which also tell Serge Klarsfeld's tragic family history.

Serge Klarsfeld's father was deported to Auschwitz by the Nazis and murdered there. Serge managed to hide from the Paris Gestapo with his mother and two sisters, surviving only by the skin of his teeth. He eventually founded and led the Sons and Daughters of Jewish Deportees from France group (Association des fils et filles des déportés juifs de France), which documented cases of Nazi atrocities and located former German and French officials for prosecution. 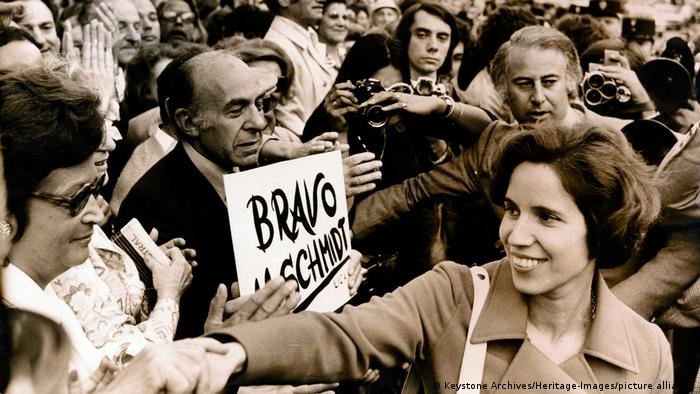 Activist Beate Klarsfeld was praised for her action

Former Nazis at the country's helm

The slap earned Beate, then 29, jail time — a sentence which was never carried out. "In the end, I was sentenced to four months probation," Klarsfeld told DW in an interview. "And then when Willy Brandt came to power in 1969, the whole thing was annulled."

The courageous action brought the young German worldwide media attention and became a prelude to numerous campaigns against former Nazis holding government offices in West Germany. In 1978, the state premier of Baden-Württemberg, Hans Filbinger, was forced to resign because of his Nazi past.

Kiesinger was a high-ranking member of the Nazi Party, always loyal to Hitler and at the time department head in the Reich Broadcasting Department. After formal denazification, the Allies dismissed him as a fellow traveler. From 1966 to 1969, the conservative CDU politician led the affairs of state as the third chancellor of West Germany in a grand coalition. 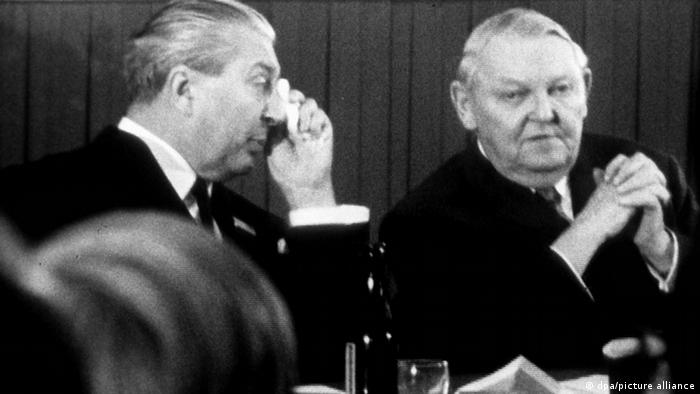 No interest in inconvenient truths

As a political activist, Beate Klarsfeld had already written several articles about Kiesinger's Nazi past, which had not attracted much attention. Few were interested in hearing about the lives of former Nazis. This changed slightly in 1968, a year of upheaval riddled with student protests and demonstrations.

But even afterwards, conservative parties such as the CDU and other right-wing groups preferred not to have an open discussion. Instead, people wanted to enjoy the prosperity of the West German economic miracle. Uncomfortable truths about former Nazis had no place in this new society.

It was clear to the politically committed Klarsfeld couple that they could not fight this political apathy with leaflets and verbal attacks at protests. "We had enough information about Kiesinger's Nazi past, which we also published. But no one was interested," Klarsfeld recalls. "To expose a scandal, you had to respond with a scandal," she concluded at the time. 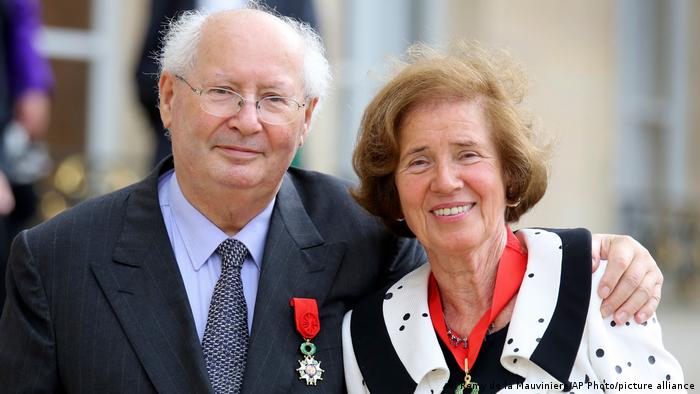 In addition to telling the tale of this historic event,Bresson and Dorange's novel is also a love story between a German Protestant and a French Jew, and thus tells the tale of an intimate Franco-German relationship at a time when relations between the countries were fraught.

"What I liked most was their relationship: a German and a Jew, that's not common," said author Bresson, who has already written a biography of Simone Veil, a former French minister who survived the Holocaust. "They teamed up to find killers of Jewish victims. They just wanted truth and justice." 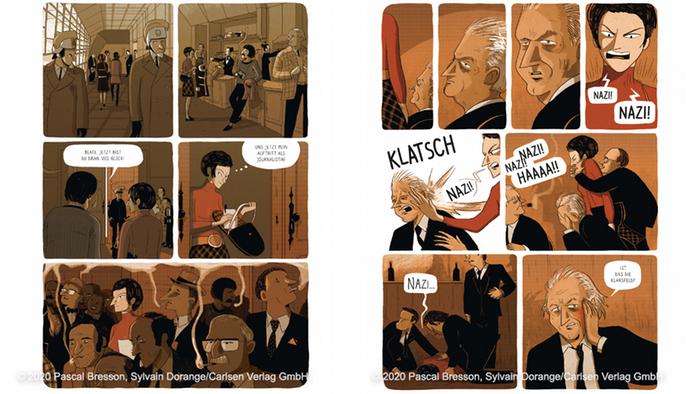 The love story of the Klarsfeld couple is woven into the graphic novel. Considering the cautious political rapprochement between Germany and France after 1945, such a relationship was unusual between a Protestant German woman and a French Jew. Beate said she was warmly received in her husband's family. "My mother-in-law had studied in Germany," she told DW. "She loved Germans very much and had no prejudice against me at all."

At the time, Klarsfeld was working at the Franco-German Youth Office as a secretary. Her slap put an end to that career — she was dismissed from her job. Yet her act went into the history books. In 1975, a law obliging West Germany to bring Nazi criminals to justice was passed by the Bundestag, the German parliament. It remains in force to this day and is known as the "Lex Klarsfeld."

The Klarsfelds have also received numerous awards for their activism work. UNESCO designated the Klarsfelds as "Honorary Ambassadors and Special Envoys for Education about the Holocaust and the Prevention of Genocide" in 2015, and they have been given Germany's prestigious Federal Cross of Merit and France's Legion of Honor.

In a virtual speech, Angela Merkel has warned that the memory of the crimes committed by the Nazis in Europe must be kept alive. "This is Germany's eternal responsibility," she said