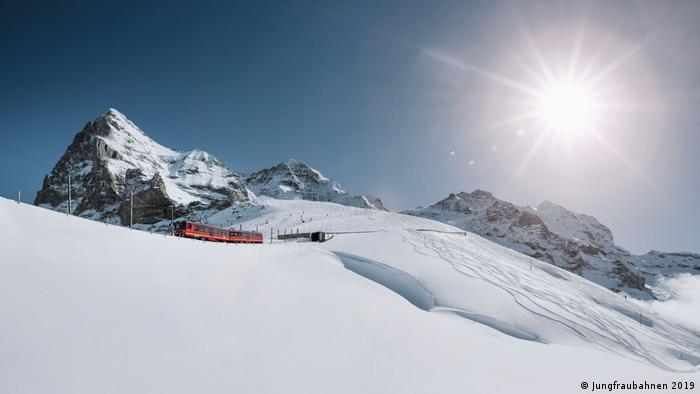 A train ride to impressive heights

In August 1893, Swiss industrialist Adolf Guyer-Zeller made a bold decision: he wanted to build a railway that would lead up to the peak of the 4,158-meter (13,641 ft.) Jungfrau. Up until that time, ascending the third-highest mountain in the Bernese Alps, with its eternal blanket of snow, was reserved for experienced mountaineers only. The first successful climb to the summit did not take place until 1811, and the planned railway line was intended to make it more widely accessible.

A feat of strength: The construction of the railway line 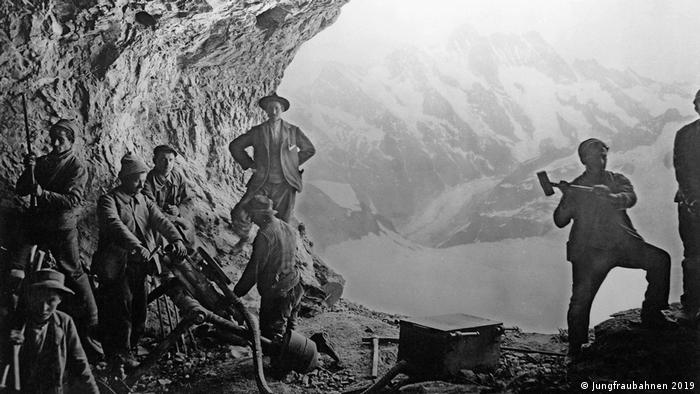 Historical photograph from 1903: The tunnel for the railway was cut into the rock by countless workers

It took 16 years from the breaking of ground to the completion of the route. The line doesn't go all the way up to the summit as Guyer-Zeller had envisaged, but with its terminus on the Jungfraujoch at 3,454 meters (11,332 ft.), its construction is still considered an engineering masterpiece. If that wasn't enough, more than half of the nine-kilometer track is in a tunnel, which had to be cut by hand. On August 1, 1912 ― the Swiss national holiday ― the first train finally made the whole journey from the mountain pass Kleine Scheidegg up to the Jungfraujoch.

A train ride to the mountain top

DW reporter Hendrik Welling traveled to the highest railway station in Europe for the series "Europe to the Maxx" on the lifestyle and culture magazine "Euromaxx." Of course, he took the train, the so-called Jungfraubahn. Once at the top, he not only enjoyed the view over the impressive Alpine panorama, he also learned a lot of interesting facts about the adventurous construction of the line more than 100 years ago. In the video, you can accompany him on his discoveries. 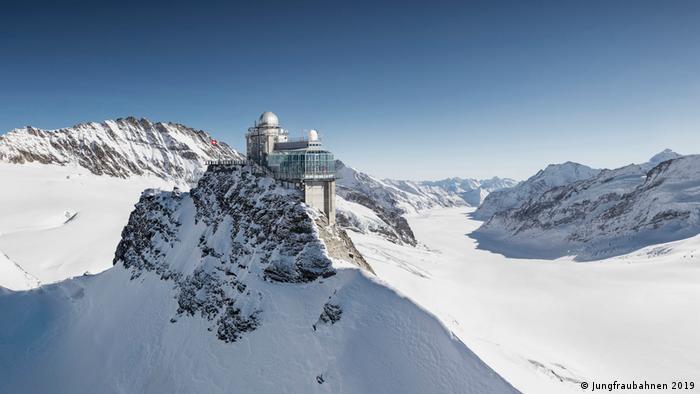 The trip takes around half an hour, during which time the cogwheel train ascends an elevation of around 1,400 meters. In order to better acclimatize visitors to the mountain air, there is an intermediate stop at the Eismeer station. From here visitors have a clear view of the famous triumvirate Eiger, Mönch and Jungfrau peaks. The terminus of the railway is in a tunnel, but when you step out on to the viewing platform, it's likely that you'll have your breath taken away ― and not only because of the thin air. When the weather's good, a unique mountain panorama with around 200 alpine peaks opens up, with the snow-covered summits of Jungfrau and Mönch seemingly close enough to touch. That's when the fascination that may have moved Guyer-Zeller to make his daring plan a reality more than 125 years ago really becomes apparent.

Getting there: By train from Bern via Interlaken and Lauterbrunnen to Kleine Scheidegg. The Jungfraubahn travels from here up to Jungfraujoch.

Hours: The train rides daily from 8 a.m. up to Jungfraujoch. The last return trip varies according to the season.

Special Tip: One of the attractions on the Jungfraujoch is the ice palace. Marvel at countless ice sculptures in the grotto, which covers around 1,000 square meters.

Europe at its most extreme: the series "Europe to the Maxx" in DW's lifestyle and culture magazine "Euromaxx" makes Europe's superlatives experienceable – from extraordinary architecture to spectacular landscapes to unique cultural phenomena. Accompanying the series, the book "111 extreme places in Europe that you shouldn't miss" was published in cooperation with Emons Verlag. An alternative travel guide, both informative and entertaining. For avid travelers, fans of Europe and anyone who likes to show off with unusual pub quiz trivia. Full of guaranteed record breakers!