To earn a driver's license, Germans must pass a strict mix of of theory and practical training. In a country that's so passionate about driving, how hard is it? DW's Lori Herber joins a new driver for her first lesson.

Cars whiz by in a blur. The cacophony of zooms echoes off the autobahn. After German beer and sauerkraut, this dense network of asphalt makes Germany world famous - mainly because, unless otherwise indicated, there is no speed limit.

Nevermind that there is a speed limit on about half of the autobahn. The average recommended speed is 130 kilometers per hour (80 mph). But for those stretches that permit unlimited tempos, not just anyone should be sitting behind the wheel. 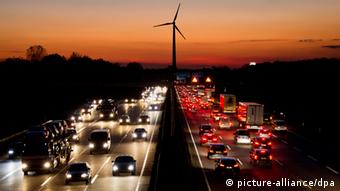 As it turns out, half of Germany's freeways do have a speedlimit

So what does it take to become fit for these roads? How do Germans actually get their driver's license? To find out, I join an 18-year old student on her first driving lesson.

"My name is Burcu, and I'm in the 12th grade," she says with an anxious laugh. "I'm a bit nervous about making some mistakes."

Unfortunately for Burcu, it's raining as we head out into rush-hour traffic - probably not the most ideal situation for a first-time driver. With Burcu behind the wheel and driving instructor Klaus Hemmann beside her in the front, I buckle up in the backseat.

In this training car, Hemman has a set of foot pedals, so he can take over if necessary. In Germany, 99 percent of students learn on manual transmissions, which are more common in Germany that automatic. If you learn on an automatic, it's all you're allowed to drive here. 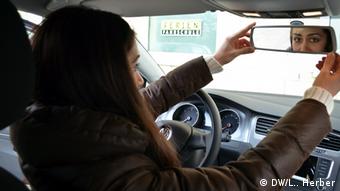 At 18, the legal driving age, Burcu is a typical new driver in Germany. Jacqueline Lacroix from the German Road Safety Council says license candidates are equally divided in men and women, adding that, "We can say 95 percent of all young persons get a license at 18."

Before that, 17-year-olds can obtain a so-called accompanied drivers license, which lets them drive with a registered, qualified companion over the age of 30. But before drivers-to-be ever enter the car, they need to pass 21 hours of driving theory courses and a minimum of 12 90-minute behind-the-wheel sessions. According to Lacroix, however, it takes on average about 40 such lessons before students actually pass the final exam.

In addition to successfully completing driving school, a first-aid course and an eye exam are required. It all adds up. New drivers can expect to pay 2,000 euros ($2,745) on average. Once the license is obtained, there's a two-year probationary period where young drivers aren't allowed to get any traffic infringements. This includes zero alcohol tolerance. 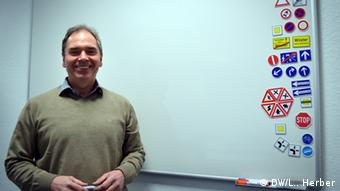 About 30 minutes into Burcu's first driving lesson, she's shifting gears on her own for the first time. We lurch forward as she slams the breaks.

"Sorry!" she says with a nervous laugh.

As an American familiar with Chicago drivers zig-zagging across lanes in all directions, I marvel at German efficiency when it comes to passing other cars. Of course, this is Germany we're talking about. Order is no coincidence.

"On motorways we have the obligation to always use the right lane," Lacroix says. "And the left lanes are only used for overtaking maneuvers. So once you have overtaken somebody, you have to go back to the right side. It's different from the US, where every lane can be used in the same way with a general speed limit." 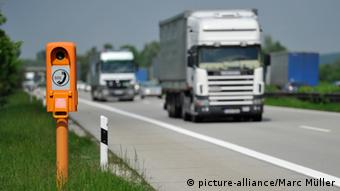 Another element that first caught my eye on the German autobahn was the orange columns whirring by my window. These emergency roadside phone towers are part of the German driver's license training program.

There's a live phone every 2.5 kilometers (1.5 miles). In case you can't see one of Germany's 16,000 freeway phones on the horizon, the road posts have tiny white arrows pointing you in the direction of the nearest one. To be honest, most of them look a bit weather worn. Does anybody actually use these things?

Emergency phone operator Andrea Loose assures me they do. With 10 years of experience behind her, Loose is one of five to 12 operators per shift, surrounded by computer screens with maps and GPS coordinates. They respond to calls from the entire highway network in Germany, from Hamburg, where they're based, all the way to Munich, immediately connecting travelers to an ambulance, police or tow truck, depending on the problem. 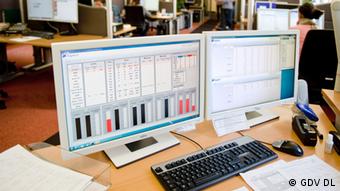 A work station at the emergency call center where Loose works

Things are low-key when Loose gets to the office at 6 a.m., but by 9 o'clock her headset is buzzing. Last year, operators fielded 1,150 calls in just one day - everything from flat tires to serious injuries.

Although most people have cell phones now, Loose said the emergency roadside phones are superior when it comes to roadside assistance because they prompt an immediate location on her screen. Some calls are direr than others.

"There was one man at a rest stop, and he went to the toilet and left his dog in the car," Loose remembers. "I don't know if the dog was thinking 'Where's my man?' So he closed the central locking, and the man couldn't get into the car, so he called me saying 'Oh my god, my dog locked the central locking!' That was the strangest call I ever received." 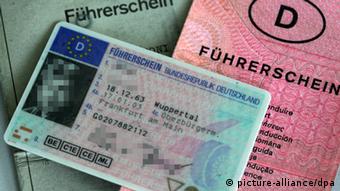 The prize at the end of the whole ordeal

Fortunately Burcu won't need to make any emergency called during her first driving lesson - but over the course of her many behind-the-wheel sessions, she'll learn how for future reference. Back in the driving school parking lot, Burcu is clearly more relaxed than when we first hit the road.

"It was a new experience," Burcu says. "I was very excited to see the normal traffic from the car."

She's passed her first lesson and driving teacher Hemmann is happy with her performance.

"I think she handled it in a relatively relaxed manner," Hemman says with an encouraging smile. "She has good motor skills, and I think with more practice she won't have much of a problem."

It may be a while before Burcu and her driving instructor venture onto the autobahn. For now, she's probably content just learning how to downshift.

A host of new models will be unveiled at North America's most important auto show. Most German carmakers fare well in the US. Sports cars and economical models are in demand this year. (13.01.2014)

Toll fees for car drivers have been hailed a success by many countries, but Germany is reluctant to make drivers pay. But since fixing run-down roads and bridges requires billions of euros, some want to charge visitors. (13.08.2013)

Germany's ADAC automotive club falsified the data of an annual survey for a members' choice award. A senior official has resigned and there are even calls to break up the club. (20.01.2014)