The eurozone is ′horse-trading′ over Slovakia | Europe| News and current affairs from around the continent | DW | 11.10.2011

The eurozone is 'horse-trading' over Slovakia

If Slovakia rejects the expansion of the eurozone bailout fund, the consequences for the rest of the single currency bloc could be devastating, warns market analyst Robert Halver. 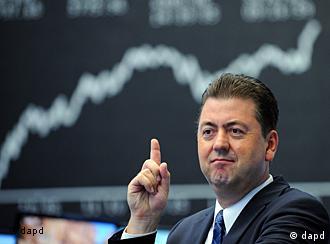 Robert Halver is a market analyst and commentator

Deutsche Welle: The Slovaks are voting on increasing their contribution to the eurozone bailout fund by 3.5 billion euros ($4.8 billion). In comparison to the total size of the fund - some 780 billion euros - that seems like a paltry sum. Why has Slovakia's vote gained such significance?

Robert Halver: Slovakia is the last eurozone country to vote on the measures, and Slovakia has always been very critical of the euro, even in recent years. As the last of the 17 nations, Slovakia has to approve the deal, otherwise it can't come into force, purely from a legal perspective.

Would a "no" from Slovakia be the beginning of the end for the euro?

We've already seen quite a lot of horse-trading in the eurozone, all the principles of stability were minimized and shot down as they tried to flee, you could say. I'm quite sure there will be more horse-trading - that they'll tell the Slovaks "vote yes, and you won't have to pay anything." You can certainly distribute the 3.5 billion euros among the other eurozone counties.

Germany alone is contributing over 200 billion euros, so it won't make much difference either way, if 1 or 2 billion euros are added on top of that. What's important is that the Slovaks approve the measures, so that we can finally set the important things into action. Firstly, a Greek default; secondly, excluding Greece from the eurozone; and thirdly, saving the banks from a domino effect.

Should some banks be worried then, if Slovakia votes "no"? Is there a threat of a run on the banks?

I don't think there will be a run on the banks. We saw in the case of Dexia Bank in Belgium that you can very quickly nationalize banks and that's what gives them security. What's important is that we stop this policy of "I want to wash, but I don't want to get wet." It's obvious what's required: a clear line. The policy must now be to say: we have to take the decisive step.

Would the rescue fund be finished if the Slovaks reject the measures?

No, the rescue fund wouldn't be finished, because you can redistribute the 3.5-billion-euro Slovak contribution. Along the lines of: you vote yes, but you in fact pay nothing. What's important for the Slovaks, however, if the expansion of the rescue fund isn't approved, is that the dilemma we've been in since May 2010 would continue. That would mean we would go in two clear directions. Firstly: mass bankruptcies of banks, and then, in the end, the break-up of the eurozone. And I doubt whether Slovakia as a small country wants to take all that on its shoulders.

How long will the money in the current rescue fund last if it isn't topped up?

The money will surely last a certain amount of time. We can cover the Greeks and the Portuguese. But it's about more than that. The eurozone must be maintained. If we are really looking at the ruins of the eurozone next year, that would be disastrous. Not only for the economy, but also for political unity. The basic aim must be to keep the euro area as a clear counterbalance to the USA, China and Russia. Germany can't tackle this task on its own any more. We are not a country that is rich in raw materials, we need the support of a number of countries. It's a Herculean task, but we definitely don't have any alternative.

Is political union the only way out?

We have to work harder towards political union, but also towards a stable union. We can't just go on like this forever and keep making the rescue funds bigger, more colorful and more diverse. Every country has to be able to do its own homework. But the Greeks and the Portuguese, which even with the best will have no chance to survive in the eurozone, they should be given the opportunity to leave the single currency, because anything else would be fatal. Because these two countries could in the worst-case scenario bring about the failure of the eurozone and we really can't let that happen.

Robert Halver is an experienced market analyst at Baader Bank.

After receiving the green light from all the other eurozone member states, the implementation of the bailout fund now hangs in the balance as the divided coalition government in Slovakia wrestles for a compromise. (11.10.2011)

All eyes on Slovakia after Malta greenlights eurozone rescue fund

Only Slovakia remains to approve the expansion of the euro's bailout fund. Malta has now voted in favor of the scheme in a unanimous late-night vote. (11.10.2011)