The Cross-Border Collaboration | Germany| News and in-depth reporting from Berlin and beyond | DW | 26.10.2004

In the past, Franco-German relations had their ups and downs, but the modern partnership is strong. Cooperation initiatives like the Euro-district around Strasbourg and Kehl could pave the way for even closer ties. 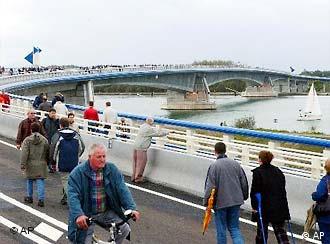 The Pierre Pflimlin Bridge brings Strasbourg and Kehl closer together

While the Franco-German relationship often throws up little spats, as a close partnership is wont to do from time to time, the cooperation between two of Europe's main players remains one of the strongest on the continent.

Nearly two years after Chancellor Gerhard Schröder and President Jacques Chirac celebrated the 40th anniversary of the reconciliation between the two countries, the relationship has blossomed further with the introduction of many innovative initiatives designed to bring France and Germany even closer together at the heart of Europe.

One of these, the German-French Council of Ministers, the combined parliamentary group established to achieve more political transparency and cooperation, meets for the fourth time in Berlin on Tuesday.

But the development in relations does not end with closer political ties between the Bundestag and the Elysee Palace. Schröder and Chirac had closer ties at grass roots in mind when they met amid the euphoric atmosphere of last January's anniversary celebrations.

They set in motion a project to create a European district involving the towns of Strasbourg and Kehl on the Franco-German border which would be a real test case for European integration. One and half years on, the little-known project is a microcosm of the larger relationship, with all its successes and failures.

The Saint Etienne elementary school in the heart of Strasbourg has been promoting Franco-German relations for ten years now and was chosen as the focus point of the initiative. Pupils have language lessons in French and German and other subjects investigate cultural differences and shared history. It is a model that is unique in Europe, something head mistress Isabelle Schuler is very proud of.

"There is not only a linguistic background at this school, but also a cultural one," she told Deutsche Welle. "We celebrate, for example, Saint Martin's day festival which is very important in Germany. We try and introduce the children into the culture: we make lanterns and practice the Saint Martin's songs. The families are invited, of course, and then we have parents and grandparents - and all singing together. Everyone is involved in experiencing the importance of the culture." 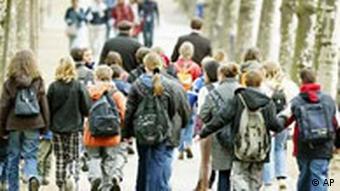 The children of the Euro-district travel and learn together.

The children of Saint Etienne come from Strasbourg and Kehl, a community of young French and Germans growing up in a European sphere. The spirit of community is helped by the fact that the French town of Strasbourg and the German town of Kehl are only separated by a bridge.

The school is seen as a model for further cultural exchange projects along the French-German border. The leaders of both countries are very keen to develop further initiatives which can promote the international collaboration. But while the project is unique and offers hope to those wanting closer ties, there will always be problems.

Not all smooth sailing

"There have been misunderstandings," explained Günther Petry, the mayor of Kehl. "But this is completely natural when members of two different cultures so closely cooperate." 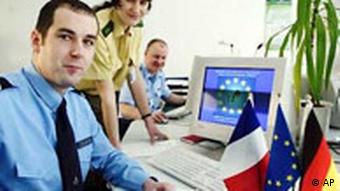 A collaboration in law enforcement between French and German police in the district highlighted problems.

Things do not always run smoothly. After a change in the power structure in Kehl's town hall, which saw a conservative majority take charge, cooperative events between the French and the Germans have sometimes been a cause of friction at political, judicial and social levels.

The landmark German French Garden Show, one of the biggest international projects undertaken between the towns, almost didn't happen. Despite wrangling over costs, the show still opened in spring 2004. The debate over who should foot the bill still continues.

There is also a suspicion in Kehl's corridors of power that the proud metropolis of Strasbourg may be using the Euro-district project to add impetus for an ambitious town development plan which includes the planned construction of a high-speed train route between Paris and Strasbourg. There is also not as much cooperation as was hoped.

"There is here no information on the job market over there and vice versa," said Petry. "Or questions related to health care. Or why a letter from Kehl must go to Strasbourg before going to Frankfurt, which takes three days. Why can't things be made simpler?" 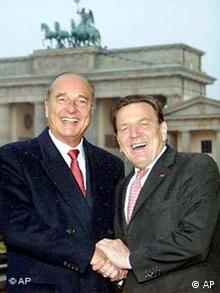 Kai Littmann, president of the civil forum for the Euro-district, is optimistic that the idea and the initiatives can work. "The Euro-district is actually the first project where something can change without big risks. Systems that are not working can simply be abolished and replaced. This is what Chirac and Schröder wanted: an experimental lab to try out new social structures."

Littmann believes that political hurdles in the Euro-district can only start to be resolved through the success of civil projects. From these, a sense of community and Euro-district consciousness can be developed. One such project is the creation of a new completely bilingual school which could open in 2005.

"If we, as one, can think ahead and offer a totally bilingual education, from nursery school to the final leaving exam, in a few years we will have a situation where the majority of the population can express itself in both languages," said Littmann.

Such a basis, which could be the foundation for a bilingual working environment in the district, could lead to a truly integrated community on the French-German border and an example for other areas which hope to develop closer ties.

Chirac to Speak for Germany at EU Summit

French President Jacques Chirac will represent Gerhard Schröder in his absence at this week's European Union summit. As Schröder returns to Berlin on Friday, Chirac will speak for Germany in an unprecedented move. (October 16, 2003)

France and Germany celebrate 40 years of post-war reconciliation with the unveiling of a major joint political declaration and a historic joint session of the two countries' parliaments at France's Versailles Palace. (January 23, 2003)

Chancellor Schröder will host the French and Turkish leaders in Berlin for talks on Tuesday that are set to delve into the issues of European economic power and Ankara joining the EU. (October 25, 2004)