The business of famine

You'll struggle to find anyone who doesn't advocate combating hunger. But some of the fighters on the front line, like governments and charities, are not so keen to mention that they earn money from the misery of others. 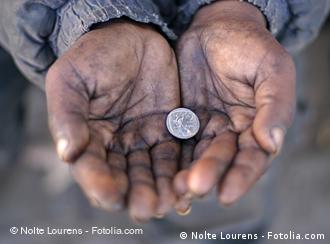 By the time aid reaches those in need, very little is left over

For European development politician Jean Feyder, Haiti is a typical example of an agricultural policy that helps industrialized countries profit while damaging small-scale farmers in the southern hemisphere. By extension, it also hurts those people most likely to suffer from famine. Feyder knows the policies and their weaknesses like the back of his hand, having worked with the World Trade Organization and the UN Conference on Trade and Development (UNCTAD).

Luxembourg politician Feyder expands on the Haitian case study in his book "Mordshunger," which roughly translates as "murderous hunger."

Thirty years ago, Haitian farmers produced enough rice for the entire country. But then Haiti was strong-armed into reducing its food import duties from 50 percent to 3 percent, Feyder writes. Heavily subsidized produce from the US then flooded the Haitian market - and ruined the domestic agriculture industry. First, the farmers lost their ability to make a living and then the people lost their reliable access to affordable food.

Today, Haiti imports 80 percent of its rice from the US - meaning the country is at the mercy of the increasingly capricious prices on the global food market. Long before the massive earthquake devastated the capital, Port au Prince, in January 2010, Haiti was already among the world's poorest countries. 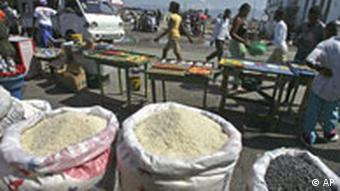 The markets in Haiti don't peddle much local produce anymore

Former US President Bill Clinton, who lobbied tirelessly for the reduction in import duties, later regretted his decision.

"It may have been good for some of my farmers in Arkansas, but it has not worked. It was a mistake," Clinton confessed in March last year. "I had to live everyday with the consequences of the loss of capacity to produce a rice crop in Haiti to feed those people because of what I did; nobody else."

According to Jean Feyder the example of Haiti is reflected in many other countries, and the US is by no means alone either. EU countries earn money by exporting heavily subsidized staple products like grain, poultry, milk powder and tomato puree at bargain-basement prices, ruining farmers' businesses in the southern hemisphere, he told DW-WORLD.DE.

How donors profit from their own generosity

This is how countries like Haiti became dependant on food aid shipments. But even these "donations" are not given for purely philanthropic reasons.

"Food aid cannot be allowed to remain a means for donor countries to offload their agricultural surpluses and break into new markets," Feyder says.

The classic example of international aid that actually benefits the donor country is often referred to as "tied aid." Over half of the world's bilateral aid comes in this form; money is given or lent to a country, but on the condition that that country uses it to purchase goods or services from the donor country. 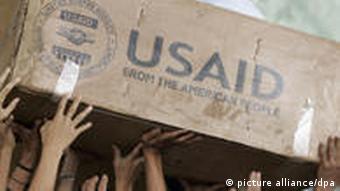 Even the most fundamental lifeline can have strings attached

One US program, "Food for Peace," takes the idea of tied aid a step further, Feyder says, because the recipient countries also have to prove "that they can become sales markets for US agricultural products." US companies ship agricultural products to recipient countries, where the food is distributed - or sold in order to finance further aid activities.

Ordinarily, third parties in the recipient countries are responsible for distributing the food. They too take a cut to cover their costs. At the end of the day, only about 50 percent of the original aid delivery may reach the people who need it, and local farmers see their market saturated.

A representative of the CARE aid organization in Kenya said that the practice often destroyed what they were trying to build. For instance, regions where the charity was trying to set up a sunflower oil sector for local farmers might suddenly find their local markets inundated with cheap cooking oil delivered as food aid.

The US Authority for International Development (USAID) wants to reform the system, but attempts to put a stop to the monetization of food deliveries were halted in Congress. As well as agriculture and transport lobbyists, aid organizations complained about the suggestions, which could endanger the income stream that funds their activities. While the US has been arguing about making changes, in 2010 the origin of "78 percent of the foodstuffs bought in developing countries" was the UN's World Food Program (WFP) - that is, food aid gone awry.

In 2005, donors, aid organizations and recipient countries agreed to try to make development aid more effective. The goal was to make it fairer on recipients and to change the system so it delivered lasting results, not quick-fixes. According to a 2011 Organization for Economic Cooperation and Development report, only one of the 13 goals established for the year 2010 was achieved, a performance the OECD described as "sobering." 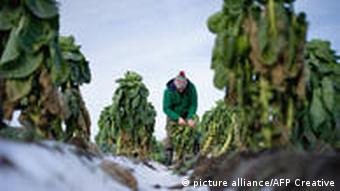 That's one of the reasons why Kenyan economist James Shikwati demands an end to development aid. He is convinced that it primarily serves the political and economic interests of the donors. He argues that corrupt regimes in Africa can profit from aid, while countries' dependence on foreign food and other produce increase.

Shikwati praised as "honest" a recent statement from German Development Minister Dirk Niebel saying that he wanted to put more emphasis on the interests of the German economy. He responded in an interview with the online magazine The European, calling on Niebel "not to damage Africa's economic interests with aid," but rather to create conditions for free trade.

Development aid is particularly likely to fall into the wrong hands in warzones and other crisis regions. The Associated Press reported from Somalia in August 2011 that thousands of sacks of food for victims of the famine there had been stolen. The WFP announced that it would look into the theft. People in refugee camps said that they were photographed with the food, then it was taken away again. Later sacks of food bearing WFP, USAID and Japanese logos were seen in markets in the capital Mogadishu.

Feeding the starving, and prolonging the war

A 2010 report from the UN Monitoring Group on Somalia alleged that the lucrative Somali contracts for distributing food aid were dominated by three individuals, saying they had become "some of the wealthiest and most influential individuals in Somalia" through this business. The report - which had monitored aid delivery contracts for 2009 worth some $200 million - also mentioned how all three individuals had been linked to arms sales and insurgent activity in previous reports on Somalia. The World Food Program said the findings were "unsubstantiated."

Dutch journalist Linda Polman, the author of books like "The Crisis Caravan - What's Wrong with Humanitarian Aid," has first-hand knowledge of misused aid. During the famine in Somalia in the 1990s she observed warlords stealing food aid from starving people and selling it to buy weapons. Polman is convinced that food aid can prolong conflicts, because "food is a weapon in war." 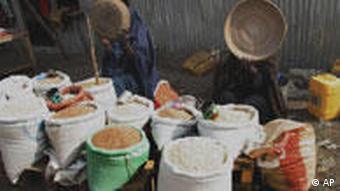 Some sellers on Mogadishu's markets would rather hide their identities

Polman warns against romanticizing aid organizations. The charities Polman describes are competing entities with commercial interests - while they are working with philanthropic intentions, they are also profiting from the famine and the aid programs. They compete too fiercely for aid money and public donations, she told Deutsche Welle, while cooperating far too little; and this trait can be exploited by major players in the recipient countries.

According to UN estimates, there are more than 37,000 international aid organizations - and many more private initiatives. Polman says donor countries and private donors should keep better tabs on aid workers and individual projects.

In some countries, like Ethiopia and Sudan, the government ultimately decides who receives the food. In these cases, Polman says, aid groups should either refuse to cooperate, or at least hammer out a shared set of preconditions for helping.

During his time on the German parliament's committee for economic cooperation and development, Wolfgang Wodarg observed several aid operations on the ground. Now is a board member of the German branch of anti-corruption watchdog Transparency International.

Wodarg says that in the worst-case scenario, just 10 percent of aid actually reaches the people who really need it.

"Corruption and conflicts of interest are an integral part of international development projects," Wodarg said, adding that only greater transparency can combat the problem.

That's precisely what the German NGO OpenAid is fighting for. The group advocates a system whereby donors and aid groups publish details of all their operations on a single platform, also enlisting help from the recipient countries. The ultimate goal is to create a portal where anybody with Internet access could attain an overview of aid programs, development projects and their effectiveness in any given country. Achieving this would make it much easier to see precisely which philanthropists are turning a profit.

A moral dilemma for aid groups

In the drought-stricken Horn of Africa, many Somalis depend on foreign aid for their survival. But humanitarian aid workers are coming to terms with the limitations of how much good they can do in a land torn by war. (07.11.2011)