From classics like "King Kong" and "Singin' in the Rain" to, most recently, "Hail, Caesar!," movies about the process of making films have followed the history of cinema. Here are some of the best ones.

Filmmaking fascinates both movie-lovers and directors alike. On anyone's list of favorite films, there's bound to be a work that goes behind-the-scenes of the film industry.

The chaos that characterizes many film shoots has inspired great comedies, such as David Mamet's "State and Main." "The Player" by Robert Altman depicts the absurdities of everyday life in Hollywood. And a whole film crew gets lost in the middle of a jungle in Ben Stiller's "Tropic Thunder."

Some of these films reflect the directors' deep passion for their art. "Day for Night" ("La Nuit américaine"), by Francois Truffaut, portrays various difficulties that can arise during a film shoot - all while celebrating the power of cinema. 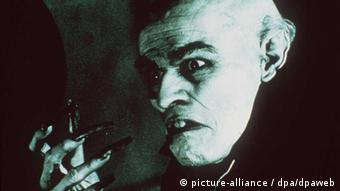 Willem Dafoe is a vampire in "Shadow of the Vampire"

Other films chronicle how famous works were made. "Shadow of the Vampire" (2000) is a tribute to the German filmmaker Friedrich Wilhelm Murnau, portraying him making the classic "Nosferatu" - in a fictionalized way. The lead actor is actually a vampire who sucks the blood of other crew members.

Film theaters have also obtained a starring role in many movies, with "Cinema Paradiso," featuring Philippe Noiret, or Woody Allen's "The Purple Rose of Cairo" among the most famous examples.

Click through the gallery above for our 10 favorites films about films.

For DW's series on the best in German cinema, we pick our favorite films set in the capital city, the backdrop for the tumultuous history of the 20th century. In each of these films, Berlin is one of the main characters. (22.07.2016)

DW's cinema team picks the best German films of all time. Our Top 10 dramas include a 1950s anti-war film, a love story set between Hamburg and Istanbul, and a polit-thriller from behind the Berlin Wall. (08.07.2016)