The Balkans′ new zeal for protecting whistleblowers | Europe | News and current affairs from around the continent | DW | 23.07.2015

Balkan countries vying to join the EU have passed, or are in the middle of passing, better whistleblower protection laws than most EU member states have. Ironically, the EU is co-financing this new anti-corruption zeal. 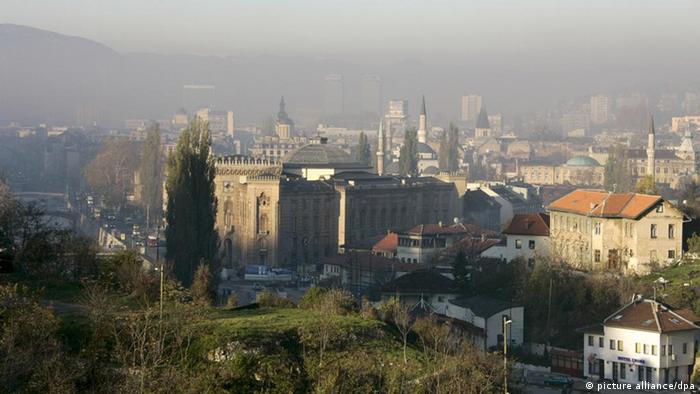 It's impossible to fight corporate corruption if you don't know it is happening. But whistleblowers never get an easy ride, and their stories often end with the realization that if they'd known what they were getting themselves into, they wouldn't have become whistleblowers at all.

Visnja Marilovic was a bookkeeper at the Skenderija cultural and sports center in Sarajevo, when, one day in 2010, she was asked to process an invoice for a lot of beds. She realized that not only was her boss furnishing his new hotel with the company's money, but that evidence of corruption was passing across her desk every day. To Marilovic, reporting the crime wasn't whistleblowing - it was her job. "As a financial official, I was responsible for the documentation to be accurate and true," she told DW. "I thought I was protecting the company from disaster and my workplace altogether."

After googling how to file charges, and getting prosecutors to investigate, she assumed the director would be replaced and they could carry on working. Instead, she got fired and went through nearly three years of misery until her boss' trial finally began earlier this year. "I passed hell with my children and for two months I had to live under police protection because of threats," she said. "If I knew how much my kids had to suffer I would not have done it." 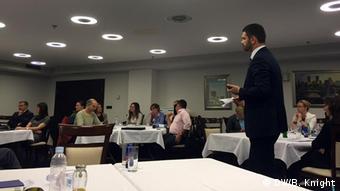 Delegates from across the region gathered at a Sarajevo hotel

With her life turned upside down, Marilovic now works at the Center for Responsible Democracy, a Sarajevo-based NGO that helped to draw up Bosnia's brand new whistleblower protection law - which came into effect in January this year. Bosnia is not the only country in the region that has written whistleblower protection into its legislation in the past few years - so have Romania, Serbia, Kosovo, Moldova, and Montenegro. Albania is in the middle of passing one through its parliament, while the Bulgarian government last year released an in-depth report that includes legislative proposals.

It all amounts to a surge of legislative activity in the region that was distilled a few weeks ago in a windowless hotel conference room in downtown Sarajevo. Legislators, government advisers, ministry officials, NGO workers, and actual whistleblowers came together for a conference organized by the international NGO "Blueprint for Free Speech" and the Regional Anti-Corruption Initiative (RAI) to compare whistleblower protection notes.

"Countries like Bosnia, long thought of as more economically backward, are now moving forward more seriously on whistleblower protection than Western European countries," said Suelette Dreyfus, executive director of Blueprint for Free Speech. "If Western Europe doesn't lift its game, it will end up being left behind in the dust."

The irony is of course that many of these efforts are being co-financed by the European Union, even though Germany, France, Spain, and Portugal, for instance, have no dedicated whistleblower protection laws.

Meanwhile, Blueprint's Mark Worth, who says he has studied around 70 whistleblower laws and draft laws around the world, explained the priorities to those assembled: "The three things a whistleblower needs are: a place to disclose information, protection from retaliation, and for the thing to be investigated. The law has to create loophole-free provisions and mechanisms for those three things to be covered." In the heat of the summer afternoon, with phrases like "Can we at least agree that pre-court protection is necessary?" flying across the conference room, the Albanian Deputy Justice Minister Idlir Peci, his shirt-sleeves rolled up, explained that he had been stung by his country's terrible record on corruption.

"I spent 20 years in the Netherlands, and I decided to come back to my country because I saw a will to change things," he told DW. "I think all the countries in the region are tired of being dragged down. And I think the politicians are also realizing they cannot hide behind their fingers and sell beautiful stories to the public without really accomplishing these beautiful stories."

But where is this new energy coming from? "My motivation comes from all the reports, especially from Transparency International, but also all kinds of other rankings, where Albania scores very badly," he said. "And from the public perception that corruption is a cancer in society that has to be cured."

A polite nudge from the EU

Yavor Siderov, advisor to the Bulgarian deputy prime minister, was making similar noises: "There seems to be a very concerted effort with regards to anti-corruption and whistleblowing, which is amazing. It's a very positive trend, given that the Balkans are constantly being given as examples of rampant corruption."

Both Peci and Siderov also said that the competition to join the EU was acting as a spur - as was the money the EU offers to help fund the laws. "It's always a good thing to have the European Union provide you with a polite nudge down the road of transparency and anti-corruption," said Siderov.

As the conference wound down, Mark Worth delivered a closing pep talk to encourage the assembled legislators. "It's a very delicate issue, and I'm hearing a lot of tentativeness," he told the various delegations. "I think you should be brave, because the whistleblower's being brave."

But as Marina Micunovic, a senior advisor at the Montenegro Ministry of Justice, underlined afterwards, the point of a whistleblower law is to end the need for bravery: "At the moment, we are just applauding the ones who are brave, but they are not our target group," she said. "We need to encourage the ones who are afraid."

The Bavaria cabinet has announced plans to set up two centers close to its borders specifically to expedite the deportation of Balkan asylum seekers. Human rights groups have dismissed the plans as 'right-wing populism.' (21.07.2015)

Legislators in Bosnia's semi-autonomous Serb entity backed the holding of a referendum on whether to continue to recognise the state court system. The US embassy in Sarajevo called the move "work of corrupt forces." (16.07.2015)

The European Union has agreed to back a German-UK initiative meant to revive Bosnia's bid to join the bloc. The plan offers the carrot of EU funds in exchange for Bosnian politicians implementing key reforms. (15.12.2014)