Political instability has hardly affected the image of the holiday paradise of Thailand. But while the military protects the all-important industry, the country has missed its ambitious growth targets for 2014. 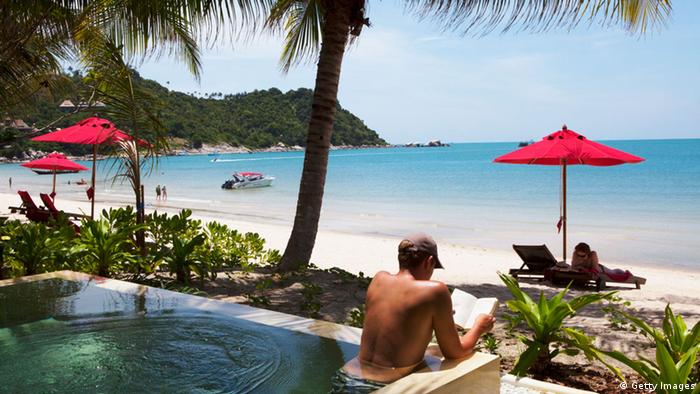 "We planned our trip on Monday (14.07.2014). I happened to get an extra week's vacation and we thought we could travel farther away," Jürgen told DW's reporter at Düsseldorf airport. His companion Daniela and he had spontaneously decided to go to Thailand. And while they are well aware of the months-long political crisis that has killed 28 people and injured hundreds, they are not worried. "We looked at the foreign ministry website and there was no travel warning."

The Haas family from the Netherlands was also on its way to Thailand from Düsseldorf, where it was waiting for a connecting flight. The family, too, was not worried about the political situation. The protests were limited Bangkok and like most tourists, the four family members were headed for the islands in the south.

These anecdotal examples appear to confirm Tourism Authority of Thailand statistics. After a slight decline in the number of visitors from Europe at the height of the crisis in early 2014, they are now even 5 percent higher than last year. However, if not just Europe but the whole world is taken into account, there is a decline of just over 10 percent.

Supranee Pongpat, director of the Tourism Authority of Thailand in Germany, says it is absolutely safe to travel to Thailand. "I just came back from Thailand and the situation is completely normal." Asked about the political situation and the military, she said: "I would like to correct the image in the West about the military in Thailand. The military is friendly to people, including tourists. It has taken power peacefully to resolve the political unrest and the conflicts."

A German Thailand expert who has been observing the political crisis for months and has witnessed the May 22 military coup in Bangkok takes a more critical view. He asked not to be named because the economy and tourism are currently highly sensitive issues in Thailand. But he says the tourists themselves generally do not notice anything.

"The tourism industry creates places that are largely decoupled from Thai politics and everyday life," he told DW. During the crisis there were virtually no military and, at most, only civil police on duty in the tourist areas of Bangkok.

But those who leave the ideal world of tourism, the expert said, quickly realize: "The conflict is still there, bubbling under the surface." The military must ensure the situation remains calm to protect the economy, the source of its legitimacy: "But the economy is stagnating at the moment."

If taxi drivers and souvenir vendors suddenly have less money, this could be quite dangerous for the military regime: "That's why they are trying by all means to revive the economy and boost tourism," he said. For example, there is currently a discussion about easing visa requirements for Chinese tourists. World Travel and Tourism Council (WTTC) statistics suggest tourism accounts for more than 20 percent of Thai gross domestic product. By comparison, in Germany the figure is 4.7 percent.

But despite all the efforts of the military government, it is clear that the tourism industry's ambitions of just one year ago will be disappointed. In 2013, the Thai government issued an ambitious growth target for tourism of 10 percent more visitors in 2014. The political unrest and the May military coup have turned this into a distant dream.

Some one and a half months after the country's military seized power, it presents a roadmap for democratic reforms. Journalist Thepchai Yong tells DW about the current developments and the media's role in the country. (02.07.2014)

Although Thailand's junta recently lifted a nationwide curfew, political protests remain banned. HRW's John Sifton explains why crackdowns on freedom of expression and association will continue in the polarized country. (17.06.2014)