Demonstrators are demanding Prime Minister Prayuth Chan-ocha, who took power in a military coup in 2014, speeds up reforms. The protest movement, which erupted almost a month ago, is gathering momentum. An anti-government protest in Thailand's capital Bangkok drew at least 10,000 people on Sunday, police said, making it the largest political demonstration the kingdom has seen in years.

The student-led protests began nearly a month ago and have been held on an almost daily basis ever since.

Demonstrators are demanding a revised constitution, an end to the harassment of government critics and reforms to the monarchy.

The last demand is particularly sensitive in Thailand — anyone criticizing the monarchy faces between 1.5 to 15 years in jail.

They also want Prime Minister Prayuth Chan-ocha, who took power in a 2014 military coup, to resign. 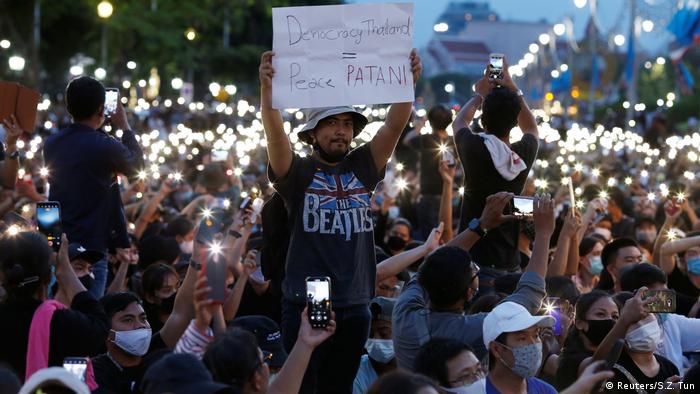 'Down with the dictatorship'

Crowds of demonstrators shouting "down with the dictatorship" gathered around the capital's symbolic Democracy Monument. Others held dove-shaped cutouts representing peace.

Student activist Parit Chiwarak made an appearance at the rally, despite being granted bail on Saturday after being arrested for his pro-democracy work.

Flanked by supporters, he held a sign that read: "10-point Monarchy Reform" – referring to a list of demands setting out changes that student protesters want to see implemented.

Police were also present, as well as a much smaller group of royalists who support the monarchy.

Read more: Life after the tourist trade for Thailand's elephants

Thailand has experienced multiple coups ever since the army toppled the absolute monarchy in 1932, replacing it with a constitutional monarchy.

The government held elections last year but these were seen as rigged, sparking public anger.

The latest wave of protests began in February this year after a court ordered the pro-democracy Future Forward Party to disband. The onset of the coronavirus pandemic, however, put a pause on these protests until recently.

In a new post-COVID-19 world, many of Thailand's antiquated school rules remain. But some students are rebelling against an education system which they say nurtures a culture of unquestionable acceptance of authority.