Thailand's democratic future at a crossroads

The day is fast approaching when the Thai people will get to participate in a referendum on the country's new constitution. But activists criticize the charter and fear it would cement the military's hold on power. 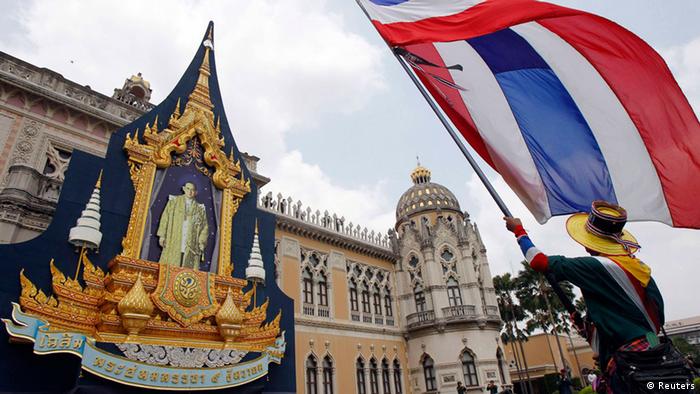 The referendum vote, which is scheduled to be held on August 7, is likely to shape the Southeast Asian nation's political landscape for decades to come.

But the contentious draft - which was formulated by the military government under the leadership of Prime Minister General Prayuth Chan-ocha - has drawn a lot of criticism from activists like Sunai Phasuk, who works for Human Rights Watch in Thailand.

Talking to DW at the German parliament in Berlin, Sunai said: "Thailand is at a critical point," adding that "it would be too late if the course of events was not stopped."

While the new constitution should facilitate Thailand's return to democracy, human rights experts fear adoption of the draft in its current form will prolong army rule and thwart the country's democratic development for years.

That is because the presented charter contains provisions for a new senate where the military junta would appoint all 250 members, leaving six seats open for the heads of the armed forces.

This appointed senate would check the powers of lawmakers during a five-year transitional period following the first elections. In addition to an appointed senate, the draft also includes a path for a parliament-selected premier. 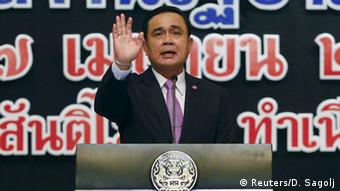 In Thailand, the military seized power in a bloodless coup in May 2014 following months of street protests in the capital Bangkok against the then government of Prime Minister Yingluck Shinawatra.

In September 2015, the military regime tried to amend the constitution. But that attempt failed after the junta-appointed National Reform Council rejected the draft charter, forcing the military government to postpone its referendum plans.

Over 300,000 teachers and 200,000 soldiers across the country are currently engaged in persuading Thais to take part in the referendum and vote in favor of the new constitution, said Jaran Ditapichai, a former member of Thailand's National Human Rights Commission.

"The whole process is faulty, as critical discussion about the charter and the referendum is not allowed in the media," he added, pointing out that the government has restricted free speech and censored the press since the 2014 coup.

"The referendum will not be free and fair," Jaran stressed. "The vote is simply a move by the military to legitimize its power grab," he criticized, noting that it would be extremely difficult to amend the constitution following its passage.

A fire has swept through a school dormitory in northern Thailand, killing at least 17 young girls. Authorities are still trying to find the source of the fire. (23.05.2016)

Thailand has defended its arrest of Patnaree Chankij, the mother of a controversial student activist. Her arrest is the latest in a string of crackdowns on government dissenters. (07.05.2016)

A new order granting soldiers the power to detain citizens is meant to silence government critics as crucial votes near, analysts say. Thailand's junta claims it is just making up for a lack of police. (13.04.2016)

A Thai committee has revealed a new constitution draft which calls for an appointed senate and the possibility for an unelected premier. Prior to the draft's release, the military banned criticism of the proposal. (29.03.2016)

Martin Patzelt, a member of German parliament, had earlier initiated a hearing on the human rights situation in Thailand. Patzelt says that Germany wants to maintain close relations with both the government as well as the Thai people. However, he reckons, it is difficult to promote democracy when a society is deeply divided, as is the case in Thailand.

Thomas Gambke, chairman of the ASEAN Parliamentary Group in the German parliament, says there is a lack of respect and mutual trust among various political actors in Thailand. "This has led to a stalemate."

In order to prevent the military government from establishing itself as the de facto top decision making body in the country, Gambke underlines, there has to be a separation of powers between various branches of government, including an independent judiciary.

"I will use all channels of communication with the Thai ambassador, representatives of the government and other groups, to work toward a separation of powers in Thailand," the MP noted.