Thailand moves to strengthen EU ties amid US-China rivalry | Asia | An in-depth look at news from across the continent | DW | 30.07.2021

The Southeast Asian country is looking to revive trade and business with the European Union to avoid dependence on Beijing and Washington. Economists say a free trade agreement is expected within the next few years. 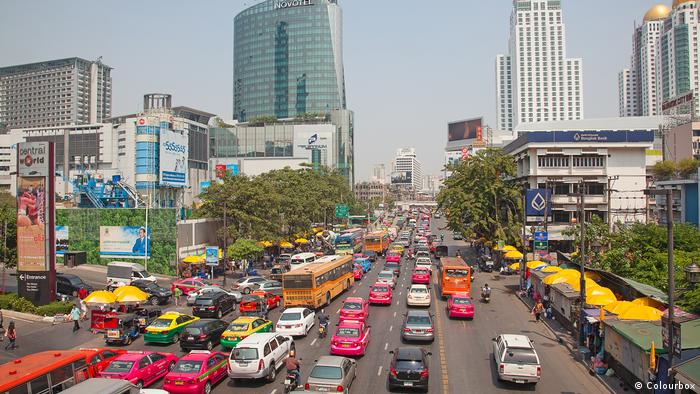 European investors are increasingly playing a bigger role in the Thai economy, allowing the Southeast Asian country to diversify trade and business away from the United States and China, analysts say.

The bloc is also Thailand's fourth-largest trading partner, with bilateral trade worth €29 billion ($35 billion) in 2020.

"There are signs that things are picking up again between the two as both look for opportunities to increase trade and investment in an effort to diversify from over reliance on China as a market," said Trinh Nguyen, a senior economist for the Asia-Pacific region at Natixis Investment Managers.

Paul Chambers from the Center of ASEAN Community Studies at Thailand's Naresuan University said EU commercial involvement releases Thailand "from the zero-sum game of choosing only Washington or Beijing."

"As China becomes a larger economic partner with Thailand, potential dependency is offset by economic relations with the US, Japan and the EU," he told DW.

According to the ISEAS–Yusof Ishak Institute's latest State of Southeast Asia report, around 47% of Thai respondents chose the EU as their preferred "third country" to hedge against the uncertainties of the US-China strategic rivalry.

Chambers noted that the EU temporarily turned away from Thailand after a military coup in 2014 overthrew a democratically-elected government, which saw Brussels suspend Bangkok's trade privileges. However, relations were normalized in 2019 after the military junta held fresh elections, which its candidates won.

The EU's total investment stock in Thailand was worth €19.6 billion by 2019, according to the European Commission.

But the amount of investment coming from the bloc annually into Thailand has been dropping over the past few years, from about €1.08 billion in 2017 to around €760 million in 2020, data from the Board of Investment for Thailand shows.

This could be part of the overall trend of declining foreign direct investment (FDI) in Thailand, which has fallen each year since 2017, said Bryan Tse, an analyst at the Economist Intelligence Unit.

Tse said EU-Thailand relations tended to lag. The US is Thailand's largest export market and China, among other things, is its largest source of inbound tourists. Japan had the largest source of FDI stock in 2019, while Singapore is an historic ally.

"With the EU continuing to lag behind the aforementioned actors, it is unlikely that its economic footprint will play a major geopolitical role," said Tse.

Tse said Thailand has had a longstanding pro-free trade policy as part of efforts to "expand multilateral economic ties in all directions and reduce reliance on any single actor."

"This means the kingdom will be very reluctant to 'pick a side.' The EU's investment, including the ongoing negotiations on an free trade agreement, fit into the Thai government's foreign policy framework."

Thai Commerce Minister Jurin Laksanawisit introduced a new framework for signing free trade agreements on July 17, and said proposals for a Thai-EU trade pact are scheduled to go before the cabinet by late September.

Talks began in March 2013 but stalled the following year after the military coup in Bangkok. But in 2020, both Brussels and Bangkok announced their intention to move forward with the talks.

The EU has ratified free trade agreements with Singapore and Vietnam, while negotiations for a trade pact with Indonesia are ongoing.

Auramon Supthaweethum, director-general of Thailand's Trade Negotiations Department, said she expects talks to begin with the EU this year and that they could be finalized within two or three years. She added that the EU is increasingly seen as a key economic partner by the Thai government.

Tse said the EU remains an important economic partner for Thailand, "even though in recent years things appear to have moved at a relatively slow pace."

"Should an FTA be concluded within the next few years — which we expect to happen — the EU could cement its place in the Thai economy," he added.

While the Vietnamese and Singaporean governments were quick to rush through a trade pact with Brussels, Thailand's government was slow to react when the EU said in early 2020 that it was interested in restarting talks.

"For the future, EU-Thai economic relations will continue to be close, if only because Thailand does not want to rely only either on China or the US," said Chambers.

Winning clubs have been able to promote strong investment ties between Europe and Thailand. However, sports analysts say a successful strategy means having realistic goals and building community support.