Thailand protesters look to Hong Kong′s pro-democracy movement for inspiration | Asia| An in-depth look at news from across the continent | DW | 23.10.2020 For weeks, protesters in Thailand's capital, Bangkok, have taken to the streets equipped with hard hats, goggles and gas masks. They use umbrellas as shields against water cannon and tear gas fired by the police.

They want the military-aligned prime minister, Prayut Chan-ocha, to step down. And they want to change the monarchy's role in governance. But for now, there is little sign that their demands will be met, and the monthslong protest movement looks like it will continue.

Footage from Thailand shows similiarities between what Thai protesters are doing and what protesters in Hong Kong did during last year's anti-extradition bill demonstrations, with thousands of people holding up smartphone flashlights.

Protesters in Bangkok were also filmed passing protective gear from the back of the rally to people on the frontline. They used gestures to remind each other to put on protective gear as police tactics turned heavy-handed.

In order to avoid being captured by the police, Thai protesters also adopted the "be water" philosophy from the Hong Kong movement, which relied on mobile forms of protest to make it hard for the police to predict movements. 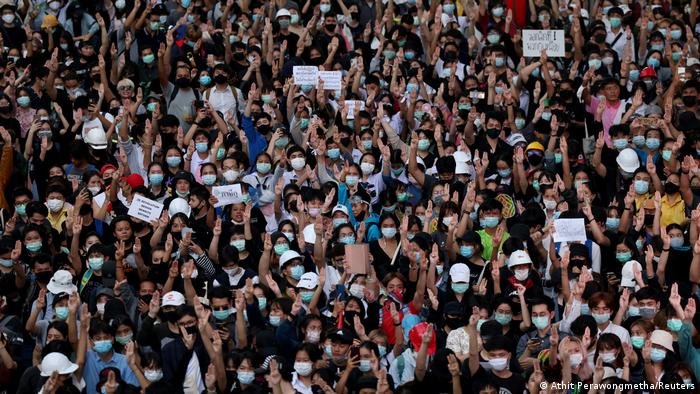 Demonstrators gather in front of Government House in Bangkok

"Protesters in Thailand understand the importance of protecting themselves with hard hats and umbrellas, which are both iconic protest gear used by protesters in Hong Kong," said Chotiphatphisal.

Jeff Wasserstrom, a historian of modern China at the University of California, Irvine, said protest movements around the world often borrow from one another.

"Hong Kong activists adapted techniques used by protesters in many parts of the world and gave them local twists," Wasserstrom told DW. "Their actions are borrowed and transformed in places like Thailand."

Wasserstrom said that strategies and symbols of protest circulate across borders, pointing to the anti-apartheid struggle in South Africa and the Civil Rights Movement in the United States as providing models for Chinese protesters during the Tiananmen Square Massacre.

They chanted "stand with Thailand" while making the three-finger salute gesture inspired by Hunger Games, which has become the symbol of the protest in Thailand.

Wong said the Thai protesters were the same as the Hong Kong protesters: "They want freedom and democracy. Thailand is not just a place where Hong Kong people go on holiday."

Wong emphasized that as people in Thailand continue to demonstrate, the "Milk Tea Alliance" should stand with them.

He was referring to an alliance of regional democracies in Asia that was formed earlier this year as an online coalition, following a tweet from a Thai actor who called Hong Kong an independent country.

"We shall weather the authoritarian storm and reclaim our freedom, irrespective of the cost, the pain and tears ahead of us," Wong wrote on Twitter.

The Milk Tea tweet triggered an online war of words between Chinese netizens and pro-democracy supporters from Thailand, Hong Kong and Taiwan.

The term now encompasses people from other countries in the region and is largely viewed as a movement to counter the Chinese nationalism and authoritarianism.

Thai activist Chotiphatphisal said that people in Thailand were impressed by the solidarity events organized by Joshua Wong, Nathan Law and other Hong Kong figures.

"Their cross-border support will help young people in Thailand to feel empowered and allow them to keep fighting in the streets," Chotiphatphisal said.

"We also feel the threat from China in Thailand, so we know how people in Taiwan and Hong Kong feel. Even though the Milk Tea Alliance is an abstract coalition, we are now connected by a common vision."

Wasserstrom said that the transnational solidarity between Thailand and Hong Kong was apparent even before the Milk Tea Alliance emerged.

In October 2016, Chotiphatphisal invited Wong to speak at two universities in Thailand. However, when Wong got off the plane, he was arrested by Thai immigration authorities and deported back to Hong Kong.

Wong still delivered the speech, but via video call.

"This is the kind of move by state actors that encourages protesters in different settings to feel an even stronger sense of resistance than they had before," Wasserstrom told DW.

Chotiphatphisal said that even though the Thai government has tried to crack down on media outlets and Telegram, protesters are still responding in very creative and sarcastic ways.

"The protesters are trying to make the Thai government look ridiculous and ruthless at the same time," Chotiphatphisal said.

Protests across Thailand in show of anti-government defiance

'Thailand is at a standstill'