Thai Prime Minister Prayuth Chan-ocha has defended his military government's performance in a televised speech. He rejected claims that the regime has abused its power and human rights. 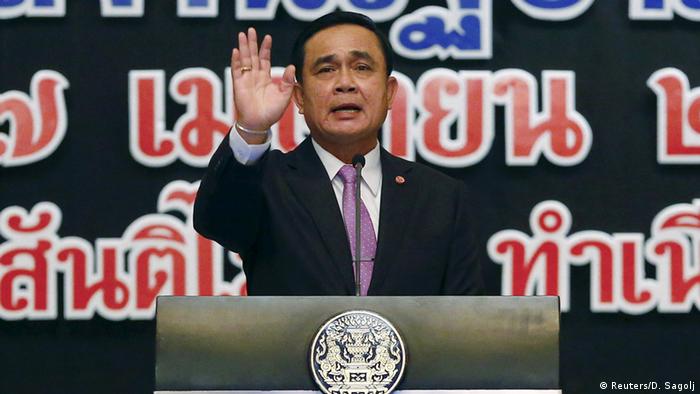 Prayuth struck a defiant note in his four-hour speech, saying that "some may call my governance aggressive, but that is necessary to improve Thailand."

The former coup leader, who helped oust what was left of Yingluck Shinawatra's government after months of protests six months ago, insisted his government was "working on critical issues to restore peace and order."

Prayuth has been criticized by the United Nations and rights groups for using military courts, threatening opponents, muzzling the media and allowing detentions without charge.

According to Human Rights Watch, at least 700 people, most of them political dissidents, have been sent to military courts since the coup. Although martial law was lifted this month, it was replaced by Article 44 of the junta's interim constitution, which critics have said is even more authoritarian.

Elections were scheduled to be held this year, but have now been postponed until 2016 to allow time for the constitution to be amended by representatives chosen by the regime.

Prayuth brushed aside criticism, asking if people "want to go back to the same place," referring to a decade-long political crisis. "If you don't want to go back, the constitution must have some specific changes."

Thailand's military regime backs the royalist establishment, which is being opposed by supporters of self-exiled tycoon Thaksin Shinawatra, whose populist parties have won every election since 2001 with massive support from rural areas.

In a thinly veiled swipe at Thaksin, Prayuth said he does not "want to hurt anyone," and added "ask someone outside the country, how much longer will they keep hurting Thailand?"

He also pointed out that the economy was on the mend, owing to stimulus measures, cheap loans, a speeding up of investment procedures and payments to farmers.

Thailand's ruling junta has lifted martial law after getting an approval from King Bhumibol Adulyadej to do so. The nation's coup leader Prayuth Chan-ocha says he wants to invoke a controversial new order instead. (01.04.2015)