A court has cleared two journalists who were sued for slander by the Thai navy. The article which appeared on news website "Phuketwan" accused some members of the Navy of being involved in migrant smuggling. 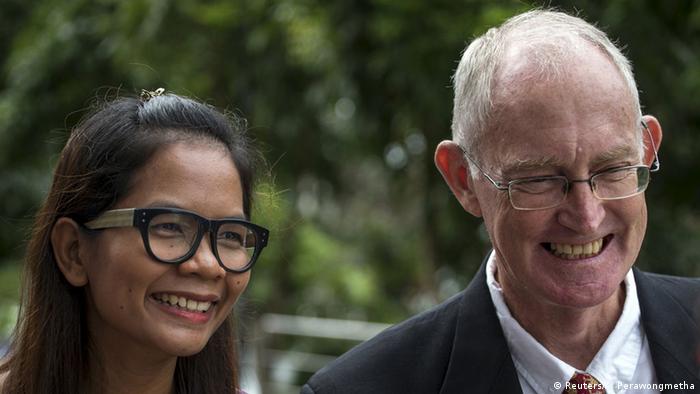 An Australian and a Thai journalist were also found not guilty of violating the Computer Crimes Act, their lawyer said from the island Phuket.

Alan Morison and Chutima Sidasathian (pictured) had faced up to seven years in prison over the July 2013 piece for the "Phuketwan" news website in a case that had sparked global condemnation from the United Nations and human rights groups. In the article, they had quoted a Reuters news agency investigation which suggested that the some members of the Thai navy helped smuggle Rohingya Muslims fleeing persecution in Myanmar.

Reuters was not charged over the series of articles, which were honored with a Pulitzer Prize last year.

"The judge did the right thing, this is a big step for freedom of expression and freedom of the media in Thailand," Chutima told French news agency AFP after the verdict was read.

"I am happy that the court clearly said that the information we presented was useful to society and that they were not defamatory," she added.

Activists decried the case as a government attempt to silence the smaller English-language news outlet.

A government crackdown in May brought worldwide attention to what had been the vast and mostly unchecked human trafficking networks, primarily used by stateless Rohingya facing oppression in Myanmar, as well as Bangladeshi migrants. So far 72 people, including local officials and a senior army general, have been indicted on trafficking charges.

The fact that no other army officials have been arrested has aroused skepticism, as rights groups argue that it is unlikely such an influential figure would have acted alone.

Thai authorities say the man arrested in connection with last week's deadly bombing at a shrine in Bangkok is not cooperating with investigators. Police believe he is part of a people-smuggling gang. (30.08.2015)