The Biden administration has asked the Supreme Court to block a new abortion law in Texas. Conflict Zone asked the Texas state senator who introduced the legislation why he thinks he's doing the right thing.

The Republican lawmaker who sponsored legislation to ban most abortions in the US state of Texas has told DW that it is "not a partisan issue."

"Texas has been passing pro-life bills for the last 20 years under Republican and Democratic administrations," State Senator Bryan Hughes said.

"This is about human life," he added.

Hughes had been asked on DW's Conflict Zone whether he was spoiling for a political fight. Attempts by other states to introduce similarly restrictive legislation on abortion have been previously blocked by federal judges.

The US Department of Justice asked the Supreme Court this week to block the ban in Texas. 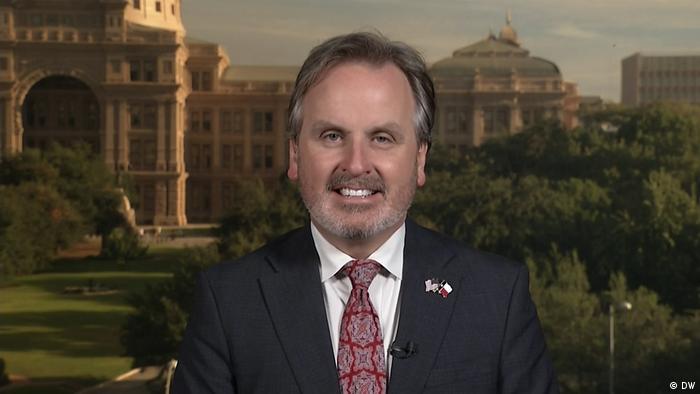 Hughes declined to say whether he himself would report people involved in abortions, but he didn't have "any plans to file such a lawsuit"

When asked whether he felt that the US Justice Department was correct to call the ban unconstitutional and written to evade judicial scrutiny, Hughes said the bill was "designed to protect innocent human life."

"That's the government's highest responsibility, and that's what the bill does. So, we're proud of that. We want to save little babies."

The law effectively bans medical abortions after six weeks of pregnancy and gives no exemptions for victims of rape or incest.

The drafting of the law itself has also been sharply criticized, allowing citizens — including people who live outside of Texas — to sue anyone who "aids and abets" abortions, including family members, though it doesn't target people who have abortions.

Was the tactic to spread fear and make sure abortion providers were always looking over their shoulders?

"If a doctor in Texas today doesn't check for the heartbeat and does the abortion, that doctor is breaking the law," Hughes said.

US court rules Texas can resume ban on most abortions

Hughes declined to say whether he himself would report on others involved in an abortion, but he didn't have "any plans to file such a lawsuit."

"Our hope is that the deterrent effect will cause them to follow the law," Hughes said. "And, so far, by and large, the abortion industry in Texas is complying with the law."

In an open letter before the bill was passed, several hundred lawyers urged lawmakers to oppose it, writing: "We implore you not to use the judicial branch in a political battle over abortion with legislation that subverts the foundations of our judicial system." Why were they ignored?

"We have consumer protection laws in America that allow private citizens to bring these claims," Hughes said. "This is nothing new."

"It's a divisive, difficult issue, and we recognize that," Hughes said. "We're following the law and we believe the Supreme Court will ultimately do the right thing. Roe vs. Wade will ... go away, and states, the people of the states, will be able to make these decisions, the way it was before. We believe that's the constitutional result. That might not happen with this case, but we believe that's where America is going."

Republicans say the changes will make elections more secure, but critics believe that the law perpetuates Donald Trump's false claims that the 2020 presidential election was stolen.

Hughes suggested that the changes were part of routine improvements.

"I don't understand why we even keep talking about this," Hughes said. "There's no question that [fraud] takes place. In Texas, every two years the legislature meets and we try to make the system better. ... This is not part of some national debate. We do this every two years."

Despite several opportunities, Hughes would not say Joe Biden won fairly in 2020, .

Was he trying to fix a problem that wasn't there?

According to data from the attorney general's office reported by the Houston Chronicle, of 43 pending cases of voter fraud in Texas only one was from the 2020 election. Eleven million people voted in the state.

The January 6 select committee in Congress has unanimously voted to hold Steve Bannon, former White House adviser and a key ally of ex-President Donald Trump, in contempt of Congress.

DW's Stefan Simons on first hearing into US Capitol attack