The US carmaker has acquired German engineering firm Grohmann in a bid to master mass production of its latest models, which experts say is crucial for the electric car pioneer to finally become profitable. 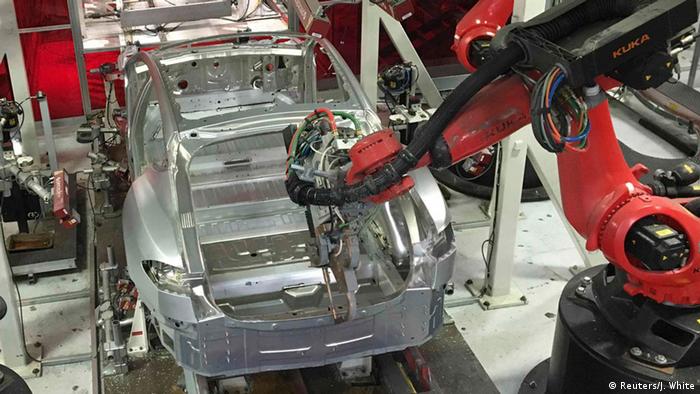 Tesla Motors announced on Tuesday that it would buy Grohmann Engineering to improve its automated manufacturing systems. The deal, whose financial terms were not disclosed, is expected to add over 1,000 engineering and skilled technician jobs in Germany over the next two years.

According to the company's website, the German firm is a family-owned business run by founder and chief executive Klaus Grohmann. It is based in the German town of Prüm and employs around 700 people. It is regarded as one of the world's leading firms in highly-automated methods of manufacturing from which it garnered revenues of 123 million euros ($135 million) in 2015.

"This transaction will bring Mr. Grohmann's leadership, a world-class team and unique expertise in-house. Moreover, it will serve as the initial base for Tesla Advanced Automation Germany headquarters, with other locations to follow," the e-car manufacturer said in a statement.

Tesla is seen struggling to master the technological challenges of mass-producing vehicles as it currently builds only about 80,000 to 90,000 units of its luxury Model S and Model X vehicles annually.

Following the transaction, Tesla expects "exponential improvements in the speed and quality of production, while substantially reducing the capital expenditures required per vehicle."

The deal, expected to close next year, is subject to clearance from regulators, including those in Germany.

Tesla shares have gained more than seven percent after the electric-car and battery maker reported its first quarterly profit in three years and said it was on track to meet its delivery targets for the year. (27.10.2016)

The country's transport regulator has written to the electric automaker, telling it to stop using the term "autopilot." Germany has been investigating the firm's driver assistance system after two fatal crashes. (17.10.2016)

Fisker throws down the gauntlet to Tesla

E-car veteran Henrik Fisker has said he's making a fresh effort to come up with a revolutionary electric vehicle with performance parameters "never seen before." Will Tesla have to fear its old rival? (05.10.2016)