Tens of thousands in Peru protest against presidential candidate Fujimori

A huge crowd of people has taken to the streets of Lima to protest presidential frontrunner Keiko Fujimori. The demonstration came on the 24th anniversary of her ex-president father's notorious power-grab. 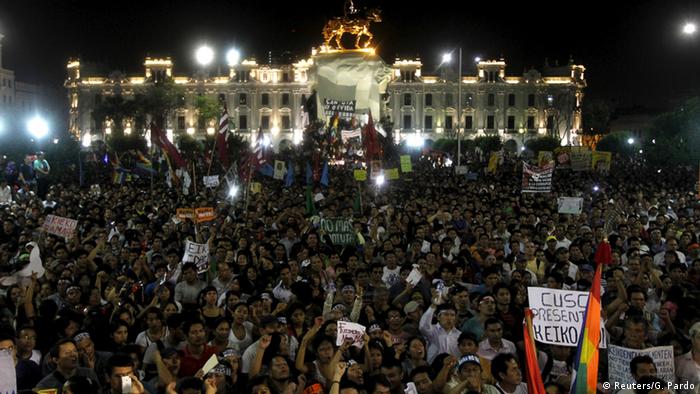 Anywhere from 20,000 to 50,000 people marched on the streets of the Peruvian capital on Tuesday night amid concern over Keiko Fujimori, daughter of the country's notorious ex-president, who is predicted to win the upcoming election.

The protest occurred on the 24th anniversay of her father Alberto Fujimori's move to dissolve the country's parliament. The elder Fujimori, who governed Peru from 1990 to 2000, is currently serving a 25-year prison sentence for human rights abuses.

While his daughter is topping the polls in Peru, she appears to lack the support needed to gain a simple majority. Nevertheless, many protestors fear that if she were to win during Sunday's election, she would simply be a repeat of her father. 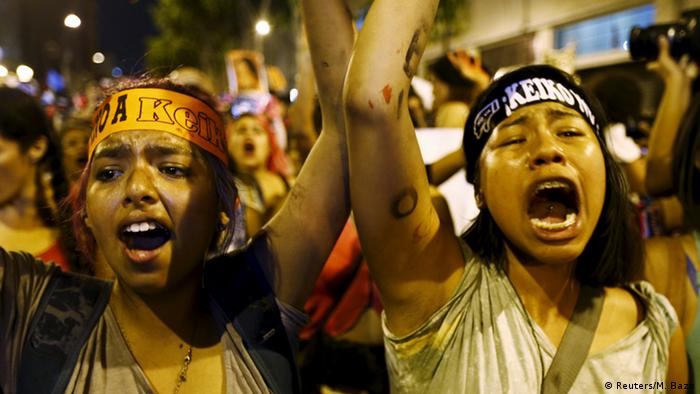 In an effort to put her detractors at ease, Fujimori published a statement online promising not to follow in her father's footsteps.

"I know how to look at the history of my country," she wrote. "I know the chapters that should be repeated and I'm very clear on those that shouldn't be."

For many, her promise wasn't enough. "I don't believe her at all," Rodolfo Lazo, a 19-year-old protestor, told Reuters news agency. His shirt put it another way: "I'm young but I'm not stupid."

Peruvian President Ollanta Humala has denied a request to pardon former leader Alberto Fujimori. The ex-president, who was jailed for corruption and human rights violations, had sought a pardon on humanitarian grounds. (07.06.2013)